Batman v Superman: This goes up to 11


Up until this week, the loudest film I ever saw in a cinema was unquestionably the first Judge Dredd film, starring Sylvester Stallone. Me and Kaz went to see it on opening night, and it almost blew us through the bloody back wall.

It turned out the cinema had only just installed a brand, spanking new Dolby sound system that week, and this was the first film they had used it on, so they cranked it all the way up to 11, and it was unbearable. You shouldn’t be watching a movie about Judge Dredd and visibly cringing every time he went to shoot somebody.

Ladies and gentlemen, after all these years, we have a new champion. Batman versus Superman: Dawn of Justice tries so hard to be the biggest, most important superhero movie ever, but will probably just have to settle for being the loudest. 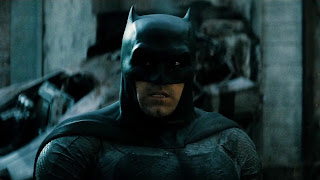 I know I’m taking a shockingly contrary opinion here, because nobody else in the world seems to think the same, but while the new movie has some tiny moments of greatness that scream of wasted potential, it is mainly just dumb and not much fun.

Oh, wait. No. Everybody else in the world does seem to think that. Carry on. 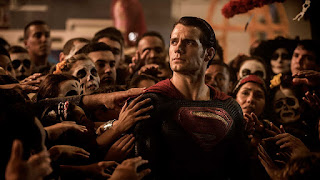 After appearing together in comic books and cartoons for decades, the new film is the first live action movie pair-up of the World’s Finest superheroes, and Zach Snyder is doing everything he can to make sure you know how important this is to the world.

This means a tone of ultra-seriousness, and earnest tackling of the real world impact of superheroes, which is always a terrible, terrible idea. The film still features loads of intense, hyper-charged action scenes, but is more interested in being profound and meaningful about what Superman and Batman really represent.  What do they really mean, man? You know?

So it does this mainly by cranking the volume all the way up to 11, and the noise of every punch, kick and gunshot is cranked right up, and it will give a good 90 percent of the audience a goddamned headache. At least the Dredd debacle could be traced to technical and human error at the cinema – this film’s loudness is built into its cinematic DNA.

Every scene has a loud bombastic soundtrack, and not just in the big moments - there is a vast choir used as a backdrop for important scenes like ‘Man Walks Down Corridor’ or ‘Batman Perches On A Crane’. The surprisingly large number of dream sequences come with a bang and a roar, a solemn funeral scene has to feature cannons going off in thunderous slow motion, and even Superman can’t fly off into the air without setting off a mini sonic boom.

It’s all a bit much, and a blatant attempt to give events more dramatic weight and heft, but just becomes shouting after a while.

It doesn’t help that all that noise comes on such a framework of stupidity. That reach for profundity comes far short, and it takes a lot of dumb to get the apocalyptic CGI climax, and a lot of dumb to resolve it.

The filmmakers might assume that it doesn’t take much more than silly coincidences – the big title fight only comes to  a conclusion based on one of the silliest coincidences in the history of comics - and thin motivations – “I don’t like you because I don’t!” - to keep things going when you’ve got two beloved icons punching each other in the head, but it will take more than that, especially when you’re trying to set up a whole new and lucrative universe.

In this context, the note the film ends on is particularly baffling, with the last 10 minutes consumed with something nobody should be taking seriously, because it's so obvious where things are going.Then again, the whole film starts with the epitome of pointlessness - showing the death of Thomas and Martha Wayne, the most depicted double murder in all of pop culture.

Still, it’s not the total write-off that it sounds like. Despite the morose plot, the movie is a typical Snyder visual feast, and finds odd moments of beauty in the super carnage, especially one moment halfway through, when it all suddenly goes a bit Mad Max.

And despite the howls of fanboy anguish at the casting, Ben Affleck makes a fine Batman, as the bulkiest and roughest version of the character. He rarely gets to show much dramatic range beyond angry glowering and gritting his teeth really, really hard, but gets the film off to a strong start with his ground-level view of the first great Superman battle.

And no movie has ever done anything more Batman than the bit where he trains up for a battle with an awesomely powered superhuman by dragging around a massive rubber tyre. (Although he still manages to be a terrible, terrible Batman, because he can't stop himself from straight up murdering any poor goon that gets in his sights.)

Cavill remains a perfectly adequate Superman, although he is better at the rage-punching than his pained attempts to give the Man of Steel a human heart. His hair looks great, all the way. 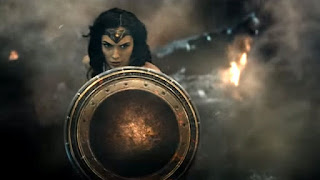 The introduction of a greater universe of more heroes also takes its first tentative steps, with some fairly clumsy set-ups for half a dozen other DC Universe films, and Wonder Woman gets a fair bit of screen time. The Amazon princess is a small bright light in all the frowning darkness, with Gal Gadot actually looking like she is the only person who is actually enjoying herself.

Jesse Eisenberg adds to the cacophony with a babbling, superficial Lex Luthor, I think Amy Adams was in there, Holly Hunter looks like she’s walked onto the wrong film set entirely, and Laurence Fishburne is back as Perry White, World’s Worst Newspaper Editor (why the shit is he assigning an investigative reporter to a puff profile of a famous sportsman, and why does he think that journalism works by barking out clever headlines across a newsroom and then writing a story around it?). 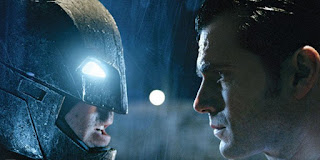 Batman versus Superman is so terrified of looking silly it ends up looking very silly indeed – the absurd sight of Superman solemnly walking into a congressional hearing is played dead straight – but is at its best when it dumps the unearned profundity and focuses on the arse kicking.

It’s been a long time coming, but has sagged under the weight of those expectations. Further installments in the DC Universe film might do well to cut loose from the cloying, frowning seriousness on display here, and play their own tune. They can probably turn the volume down a bit, too.
Posted by Bob Temuka at 1:50 PM