There were only two TV channels available when I was a little kid, so the choices of entertainment on endless rainy Sunday afternoons was severely limited. One of the channels would usually be playing some kind of incredibly boring sport like snooker or golf or motor racing, and the other would probably be showing an old western.

And I hated the old westerns. Some of them would start with that Warner Bros sting, and every time I saw one, I would pray that they were going to play a Daffy Duck cartoon or something, but then it would all be black and white dust and scraggly bushes and boring boulders, and it would be just another damn western.

I was a Star Wars kid – the original films came out when I was between two and eight years old, which means I never stood a chance of being anything other than a Star Wars kid. And it led to a true fascination with the weird and wonderful worlds of science fiction, and things like 'real life' and 'realism' could piss right off.

After all, how could even the best Western ever compare to anything that had lasers and monsters and spaceships? All the cowboy movies ever had were endless dull pistol gunfights and women in huge dresses swooning over the passion of it all, and even as a kid, the ideological treatment of the native American population in most films was dodgy as hell.

That affinity for science fiction and fantasy naturally led into a teenaged horror obsession, and meant I would watch the worst nth-generation copy of an Umberto Lenzi film over anything with cowboys in it. And then I got bored with all that rubbish, grew up a bit, and suddenly, all I wanted to do was walk tall. 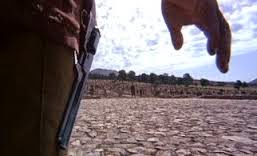 I finally got into the Western genre in my very late teens, and I walked in through a door marked 'CLINT'.

When you leave school and head out into the world, you don't know who you are yet, and all you can do is model yourself on the people you admire, even if they're fictional. I was happy to have some of Patrick McGoohan's enigmatic bluster from The Prisoner in my mix, and still prided myself on living up to Superman's moral code.

But Clint Eastwood was the coolest of them all, a man of very few words with the most intense squint in the world, and while I was (and still am) a total pacifist who abhors violence and can't stand the macho bullshit behind the use of guns in the real world, the same character that Clint played in almost all his movies still seemed like a brilliant role model.

His many, many films varied in quality from outright rubbish to sheer brilliance, but the best, without any question, was Unforgiven, and that film single-handedly finally opened my mind to stories being told on the the wide prairie winds.

Unforgiven has a shaggy and loose first two-thirds, but the just makes the apocalyptic good climax all the more stunning. The last third of the film is pure melancholic poetry, as William Mummy reveals that the weight of all his death-dealing is still on his shoulders, and that it's something he'll never get over.

He knows that violence is not the answer, but he still goes into Greely's shithole and kills everybody who fucks with him, whether they really deserve it or not, and then stands out in the rain under an American flag, and tells the survivors to make it right, or he'll kill every damn one of them, and that doesn't just rip apart the heart out of the Western, it's a concise and poetic way of exposing the heart of American itself, one of honour and friendship, crawling its way out of a bloody and muddy past. 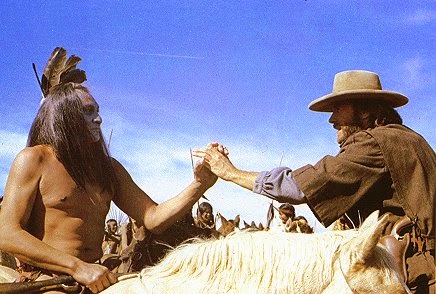 Westerns didn't have aliens or hyperspace or teleporters, but they could come loaded with meaning and gravitas that space sagas can never really match, and after having my mind blown by Unforgiven, I started watching every Western I could find.

The Outlaw Josey Wales is the other great Eastwood film, not just because the lead character is a one-man army who can not be stopped, but because because there is iron in his words of life and death, and his willingness to leave the blood behind.

And the Eastwood hero-worship inevitably led to the Spaghetti Westerns, which could be lacking in the emotional depth of Eastwood's later work, although Once Upon A Time In The West is still a jewel of a movie, exposing new depths every time it's viewed.

But while they had their moments of  sad pathos, the Spaghettis were mainly just hugely entertaining with fantastic histrionic performances and set pieces of unbearable tension and excitement – the final gunfight in The Good, The Bad and The Ugly is still one of the  tensest, operatic action scenes ever. 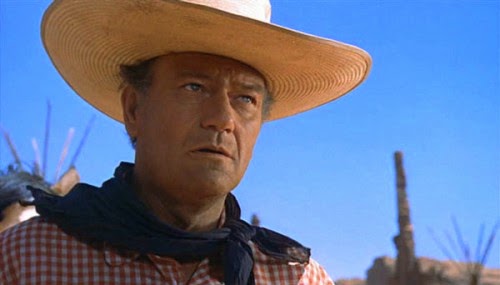 And once I'd got over my innate prejudice of the Western, there was no stopping me, and there was so much more brilliance to be found, and I'd follow any recommendation from anywhere, from movie magazines to the Preacher letter column.

I had always thought of John Wayne as a bit of a shallow caricature of a character, but after watching films like The Searchers, Rio Bravo and Stagecoach, I grew to appreciate his subtleties – the moment in The Searchers when he finally catches up with his lost niece after years and years of hateful tracking, and embraces her, still might be the most moving moment in all of cinema.

And there were always new lessons to learn - films like The Wild Bunch taught me the value of having a code, and of sticking by your word, even if it means your death, and more films articulated that unjust treatment of Native Americans that I had always felt uneasy about.

Westerns are the poetry of the common man in an uncommon land. It's a hard land, and taming that landscape inevitably sees characters taming their own souls, and becoming more civilised and more human.

They could get giant performances from Gary Cooper, Lee Van Clef, Montgomery Clift, Eli Wallach, Henry Fonda, Jimmy Stewart, and even Dean Martin. They splashed the wide open legends of America across the big screen, and confronted the country's own myths.

They helped teach me that genres don't really matter, and that great stories can be found on dusty roads, just as easily as they can be found on alien landscapes. And they featured some extraordinary stuntwork, of a kind rarely seen anymore.

And they were stories of people – broken men and resolute women, thieves and bounty hunters and herders – finding their place in this new world. What kind of young man could ever resist that?

The golden age of the Western movie ended a long time ago – cinema-goers became more interested in spectacle than introspection, and while the genre will never really die, there is just the odd tale of the Wild West .

By the time I got into them, there were few showing up in theatres at all. Occasionally you'd get something like the Quick And The Dead, an unashamed cartoon, or worthy efforts like Appaloosa, Seraphim Fall, or the magnificently melancholic Assassination of Jesse James by the Coward Bob Ford, or modern version of ancient themes like No Country For Old Men.

The best Western tale of the 21st century wasn't even at the cinema - Deadwood was the best of the great HBO series of the past 15 years, and re-examines a lot of the themes that made the Western great, while bringing something new to the table.

And even though Deadwood is ten years old now, and there are relatively few tales of the Wild West forthcoming, there are still some, and I'm on board with them all. I'll never get into space or fire a laser, but I'm ready to saddle up and ride into the sunset any day.
Posted by Bob Temuka at 10:04 PM

I can recommend Hour of the Gun if you haven't seen it. It's kind of overlooked, but for my money it's up there with The Wild Bunch, Outlaw Josey Wales etc. One of James Garner's best performances, and wonderfully bleak in its outlook.

I was a Star Wars/sci-fi kid, like you, but I was also partial to those westerns on telly on Saturday afternoons, usually on BBC2 or ITV. With you on Deadwood though. Not just a great western series but one of the greatest TV series ever.

Thanks for the Hour of the Gun recommendation, I do like me some Garner.