I like stylish and smart comics – comics that make you think, while looking good. I like complex sagas and humanistic aches, and I’m always looking for comics with a bit of thematic, emotional and spiritual depths.

There are plenty of comics that are both intellectually stimulating and terribly moving, and we could always use more. They make us all better people.

But sometimes, all I want to read is a comic book featuring two characters beating the living crap out of each other. 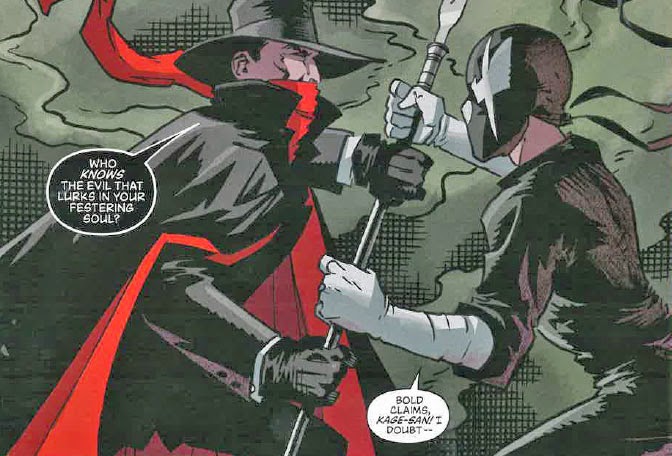 Kirby was the King because he brought power and motion into the funnies like nobody before him, but the lessons he taught have been diluted through the generations. Fight scenes in modern mainstream comics are usually painfully generic – a whole lot of posing followed by uninspired fisticuffs, as characters run around unbound by realities like gravity or momentum.

After all, it isn’t easy to stage a good fight scene in this static medium. Action scenes are all built around movement, and that's the one thing comics can’t do. Instead, they have to create the illusion of movement through smart staging and thoughtful use of the space between panels to build the notion of a live beatdown.

There are still plenty of modern artists who can draw a mean action scene – Stuart Immonen‘s action scenes in recent X-Men comics are vibrant and alive, and the sheer power of Frank Miller’s art often blinds me to the dodgy ideology of his stories.

And there are still plenty of good action scenes in comics, you’ve just got to be prepared to look for them among the mountain of mediocre mayhem. There are still great fight scenes lurking in a new Shaolin Cowboy or BPRD comic. I’m usually only truly blown away by a nice piece of action once a month or so, but sometimes you get a double dose, in the unlikeliest worlds of noir and laffs. 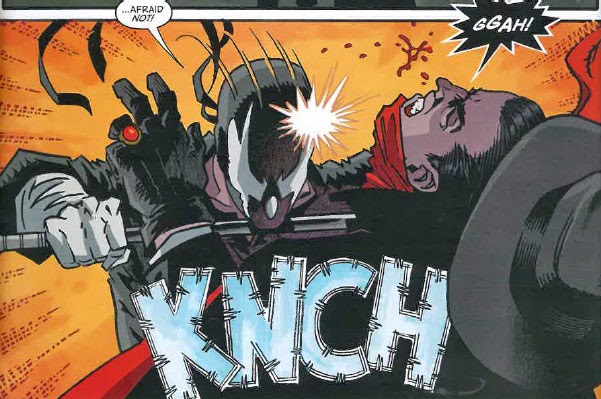 There were two tastes of terrific action in the small stack I brought home from my most recent visit to the friendly local comic shop. The comics they appeared in couldn’t be more different, but they both came with pure thrills.

The first one was in Matt Wagner’s latest Grendel comic, so that wasn’t much of a surprise, because Matt Wagner’s Grendel comics often come with clear, distinctive action scenes, (his second Batman/Grendel story is often sneered at for a lack of complexity, but has some of the best smackdowns in comics). But the fight scene in the opening pages of issue two of Grendel vs The Shadow #2 was still excitingly unpredictable.

The appeal of crossover comics like this is that you get to see iconic characters who have never met before truly test themselves against a worthy opponent, and it’s enormously satisfying to see The Shadow kick seven kinds of hell out of Hunter Rose. 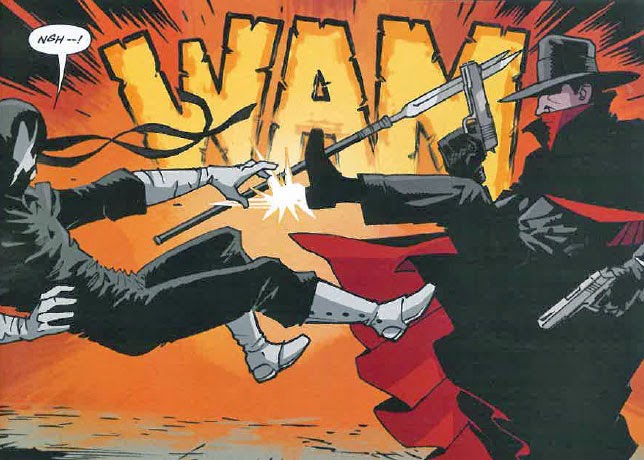 Hunter Rose is a great character – arguably one the greatest comic characters to be created in the 1980s – but he is also a bit of an insufferable prick. Arrogant beyond words and bitingly callous, the only times he is really put through his paces is when he takes on another powerful figure, usually from another universe.

And The Shadow definitely wins the first fight between these two - after Grendel ended up back in the Shadow’s era through some kind of time travel shenanigans, the two were always bound to clash – with Grendel’s cocky arrogance see him losing the battle, and his wickedly lethal fork.

It’s pulse-pounding action, with blows landing with a cracking ferocity, and Grendel’s flying attacks coming up against the brick wall of The Shadow’s unbreakable will. It’s clear, concise action, as two uber-men with extraordinary skills show off their moves, which include hypnotism, smoke bombs, and wicked jabs at nerve clusters.

The second issue ends with an imminent rematch, as Grendel uses his smarts and his natural sneakiness to get the upper hand, and the concluding part of the story is bound to feature more of the same magnificent fisticuffs. Bring it on.

The Shadow and Grendel are fighting in a dark world of stark colours and intense sneers, but there was a second blast of decent action in last week's comics, in an entirely different world - a world of swords, and sorcery, and cheese dip.

I didn’t start getting Groo vs Conan because I was desperate to see some kind of titanic clash between two quintessential barbarians, I got it because Groo comics are always jam-packed full of laffs, and the comic's inherent silliness only amplified when contrasted against the moody seriousness of Conan. Conan has cracked about four jokes in his entire history, and although his po-faced seriousness can often be hilarious, it's usually not intended to get that reaction.

But that makes him the perfect straight man to Groo, as Conan wrestles with the unbelievability of Groo's seriousness before the mayhem starts. That's not surprising, and it's not surprising that the sub-plot of an addled Aragones running around the city, totally out of his mind and imagining the whole crossover, is also hilarious.

But what was surprising was how exciting the actual battle between these two swordsman actually is.

When they finally throw down, it’s a proper fight, with Groo's furiously pumping arms and legs against Conan's slower, more powerful bulk. It really shouldn’t work, with Tom Yeates’ textured Conan smacking up against Aragones’ usual rubbery line, but it does, and that contrast only helps build up the flow of the action.

It also helps that the fight at the end of #3 of the crossover is really, really funny, with Groo spouting silly lines – “Groo moves with the speed of a duck!” - or stopping in the middle of the battle and trying to remember what his great skills actually are (probably something to do with having a good memory).

The two characters clash with confounding calamity, and it’s a wonderful, wonderful mess. 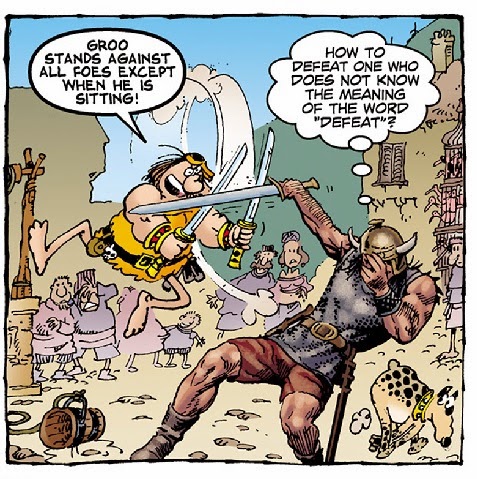 The fact that both of these comics are crossovers mean there can’t really be a result to all this fighting – Groo can’t slay Conan and The Shadow can’t put Grendel down for good.

But that's okay - I'm not in it for the thrill of who-beats-who,  it's the fun of the fight itself, and even in this gloriously static medium, there is some fast-paced action to savour.
Posted by Bob Temuka at 10:51 PM