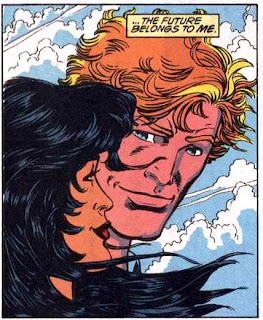 Even though Wally West had been the title character in the Flash comic for half a dozen years by this time, it wasn’t until Mark Waid came in as writer that the character got to this point, where he finally stepped fully out of the shadow of his predessor, and became his own man, his own hero.

It’s the moment when Wally West grows up and moves on, but it’s also the moment when Waid – whose Flash run now feels incredibly underrated, with most Flash kudos going to Geoff Johns’ attempts to make the comic VERY SERIOUS INDEED – shows that you can actually take a long-running superhero comic forward, and you don’t have to keep living in the past.

It’s where Waid unwittingly sets the template for much of DC’s 90s superhero comic revamps, taking a story forward instead of running around in circles by replacing a beloved hero, and making the replacement just as charming, noble and interesting as the original.

Waid would go on to do several more years of excellent Flash comics, but this is the moment where DC superhero comics changed, and grew up a little, and moved away from a moribund status quo. It would only last a few more years before that old status quo was reborn, and the story went back to focussing on boring old Barry again, but for a while there, Wally West was The Flash, and he deserved to be.
Posted by Bob Temuka at 2:48 AM