There is certainly no shortage of super-smart heroes in mainstream comic books. Modern comic heroes have been geniuses since the very first days, and back even further into the pulps, where super scientists quietly and modestly saved the world on a weekly basis.

The Marvel and DC universes are overflowing with them – main characters who happen to be the smartest people on the planet, putting their intellect into the pursuit of truth, knowledge and fair play. They are often noble and inspirational, showing us a better way to live.

But they can also be complete dickheads: narcissistic and obsessive, and downright dangerous. And if there is one bad place to be a super-genius, it’s among the residents of the Marvel Universe, because they will tear those fucking nerds down. 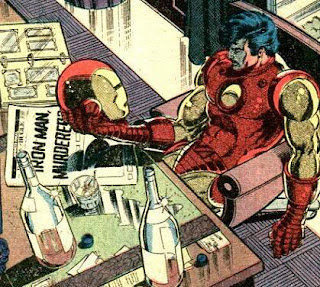 The DC Universe has its share of super-intelligent super-jerks, and even set the template with the mighty Brainiac 5, who couldn’t help being a total dick to his less cerebrally-enhanced teammates, right from the start.  But Brainy was still likeable, and was often put in his place, and while he was an arrogant asshole, it was only because he was invariably right about everything and everybody learned important lessons about friendship and sacrifice and shit.

But when it came to consequences for his super smartiness, Brainy rarely got anything worse than an atomic wedgie from Shrinking Violet now and again. In the Marvel Universe, which has always prided itself on being a little more real-world than its Distinguished Competition, the smart guys are painfully put in their place.

The most intelligent heroes in the Marvel Universe are probably Richards, Stark, Banner, Pym and Parker, and they’ve all been made to paid for being such a smartarse, over and over again.

None of them are safe. 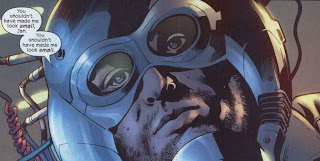 Tony Stark is a mechanical genius, able to build machines that nobody else in the world can conceive. As smart as he was, he was morally flawed from the start – an arms seller and commie hater who morphed into a corporate raider, (which some would consider even worse). But he never got away from his just desserts - good old Tony became one the great flawed heroes when he fell into the bottle, and every second writer who takes on his story has the bright idea of tearing everything he owns and loves away from him, before making himself whole again. It’s become total cliché, but that doesn’t make it any easier for Tony

Hank Pym might have been mentally unbalanced when he started slapping poor Janet around, but it’s always been hard to forgive him for that, or any of the other times he came off as a creepy, arrogant jerk. Of all the supersmart guys, Pym is the one who deserves all the ridicule and humbling he can get, and he’ll never get the thing that makes the great heroes. He’ll never get total respect.

Bruce Banner was so smart he built the biggest bomb in the world and then he jumped right in front of it, and his life has been an unending nightmare of brutal destruction since then. So that’s him told.

Peter Parker’s intelligence never did him any good. He was picked on in school, and all that raw intelligence was so busy dealing with the Green Goblin, he didn’t have time to do anything else with it. (But he does offer a bit of hope, which we’ll get to later.)

And then there is Reed Richards, who is the brainiest of the lot (especially when he can stretch his brain into strange new configurations). As the leader of the Fantastic Four, he has got off a bit more lightly than the rest – he has respect, and a dream job, and a loving family. But he is also a lot harder to write than he looks, and many decent comic writers have utterly failed to get Reed right, and have him sound cold, or charmless. His elongated head is just as full of empathy as his equations, but he can still be taken down a peg or two, and, at the very least, he is not to be trusted. (See Civil War, which got Mr Fantastic spectacularly wrong). No wonder the Ultimate version of him went full-on villain – it’s the only “logical” road for the smartest man in the world. Of course he’s going to try and take it over.

Marvel established itself as the home of the everyman hero long ago, and there isn’t really a place in that home for the smartass. The subtext of all the degradations heaped upon these heroes is a real fear of intelligence, the kind of fear that has existed in the real world throughout human history, often with devastating effects to our development as a species.

There have also been plenty of bad guys with incredible intelligence – all of the great Marvel villains share a terrible ruthlessness, an indomitable will and a fierce intelligence. And while they never win, they never seem to really suffer in the same way as the heroes. 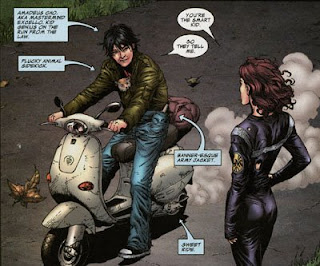 Revenge of the Nerds came 29 years old, but they’ve been playing the long game, and things are changing, even in the Marvel Universe.

The introduction of Amadeus Cho is a good sign – the seventh-smartest person on the planet is pleasingly well-adjusted to his smarts, and uses them in interesting ways to stay alive in the incredibly dangerous world of Hulks and Hercules. And for the first time in his history, Tony Stark is arguably the most popular character in the Marvel Universe, thanks entirely to the charms of Robert Downey Jr.

And Peter Parker has a job that actually encourages him to think, which is the best thing to ever happen to him. He’ll lose that role one day, some new creator will become obsessed with resuming the old status quo, but for now, his intelligence is working for him, instead of against him.

The Marvel Universe keeps tearing these fucking nerds down, but they just keep coming back stronger, resisting the dumb arguments and showing a smarter way to live. We should all be keen to see what they can show us.
Posted by Bob Temuka at 7:29 PM

Have you ever read the wonderful 'Flowers for Rhino' by Peter Milligan and Duncan Fegredo which gives compelling arguments for remaining as stupid as possible when you live in the Marvel universe?

Lots of great scans from it here
http://scans-daily.dreamwidth.org/4090899.html

I haven't read that story in years, but remember it with fondness. I haven't even seen any collected editions of that Tangled Web series in ages. They must be totally out of print...