Batman on a horse (A perfect panel #1) 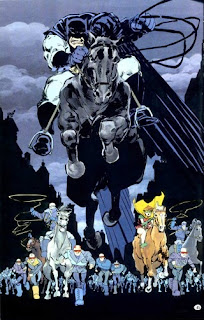 The Dark Knight Returns
The panel where Batman literally rides in to save his city from darkness
By Frank Miller, Klaus Janson and Lynn Varley

Some of the politics may have dated, and even the interpretation of Batman feels like it has no place in the 21st century, but the pacing of The Dark Knight Returns is immortal – dozens of pages of tight, claustrophobic panels, talking scenes and scattershot action, occasionally blowing out into full-page explosions of power.

This full-page spread towards the middle of the last book in The Dark Knight Returns still has the most impact, Batman literally charging into action to save his city, before it can tear itself apart. Batman and his gritted teeth, ready for battle, his steed leaping forward towards the reader, backed up by an army of youth, looking for a direction.

The perspective is a bit off and a little skewed, particularly around the youthful army that is backing Batman, but this panel is still all about the forward rush into righteousness and justice, and leaping into the fray.

And while it is the most cinematically powerful in an intensely cinematic comic, it’s still only a powerful moment that comics can only really pull off. At the turn of the page, the moment is captured perfectly, and the reader can spend as long as they like on that cusp of violence, before all the punching starts.  In that moment, in that second where Batman is coming to save the day, the most claustrophobic comic of its time opens wide, and pulls you in.

And it’s going to be okay, because Batman is coming. On a horse.
Posted by Bob Temuka at 9:51 PM