Moore and Morrison: No difference vs same thing

There was a one-page cartoon in a mid-nineties issue of a Lethargic Lad comic, when some grumpy character was portrayed reading a popular column by a popular writer in a popular comic industry magazine.

The entire cartoon consisted of eight panels of the character frowning silently as he intensely read the column, before ending with a final panel that has him throwing his hands up in the air and crying “But who gives a fuck!?!”

I always think of that little cartoon anytime anybody starts banging on about the feud between Grant Morrison and Alan Moore. 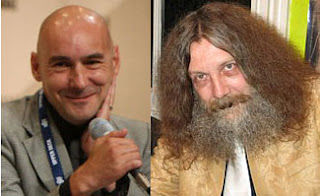 I read everything both Moore and Morrison write – I get every new release, track down as much of their dodgy early stuff as possible, and read, watch & listen to every interview or essay they do.

But even though both creators write about very similar subjects in very different ways, even though they both rode a tide of American appetite for British creators, and both made old superheroes look new and interesting before doing their own thing, they remain mildly antagonistic about each other.

When I first saw them making snarky comments about each other in interviews, it was really familiar. It felt like when you have two mates from two different groups of friends, and you all end up together, and the two mates just don’t like each other, for reasons you don’t fully follow. There’s no reason for it, but it’s always obvious by the cold shoulder and pointed comment.

Moore and Morrison are not my mates, but I follow their work. And that’s all, so I don’t have to take sides in any argument. When Morrison recently took a couple of shots over who was published first, I read the whole thing, but I still didn’t care enough to take a side.

I didn’t take sides because it’s a complicated mess, and because they’re both right, and they just don’t appear to be that fond of one another and that’s just life.

And I didn’t take sides because it’s none of my fucking business. 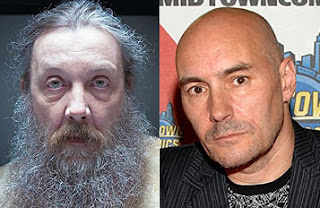 I’m still chugging away at some old Comic Journals I bought recently, and I’m loving the wide-ranging interviews, astute reviews and long forgotten news, but I’m fairly fucking sick of the fucking feuds

There isn’t an issue that doesn’t have some three-page reply to a letter, throwing an argument back with obvious points and ridiculous arrogance. It’s the Journal vs Ellison, or the Journal vs Steve Grant, or Max Allen Collins, or Dave Sim, or somebody. The Journal has always had an unfortunate tendency to play the man, not the ball, and this attitude has riled up more than a few creators, who understandably get annoyed by being labelled lazy hacks in scathing reviews, and who bite back when bitten.

It can be amusing to watch from the sidelines, with no stake in the issue, and see that nobody is covering themselves in glory. But it also gets a bit tedious when they use minor grammatical errors as total proof of incompetence or illiteracy.  I’ve still got a few Journals to go through in this small pile of purchases, but I’m going to skip over the Blood and Thunder letter column in the rest of them, because it’s all old wounds and hurt feelings.

That level of discussion has somehow become the default setting for much interaction on the internet, as agendas get pushed and slights are taken over the most minute shit. Any long discussion in any corner of the world wide web inevitably descends into bitter recriminations.

There is boldness in anonymity and physical distance, and we all suffer from varying degrees of entitlement that can drive some into a rage if it is ever threatened.

Another major side effect of this age of ultra-communication is that any comment – no matter how small, trivial or frivolous – can be repeated, and cut-and-pasted, and re-tweeted, over and over again. An idle comment can spread across the world, spawning endless analysis, but with all context lost. A joke comment at a convention becomes proof of an agenda, or of real hatred.

While there are rare cases when Morrison specifically jumps on a soapbox to yell his side of the story, for the most part it’s only a subject that gets dredged up by over-eager interviewers. They may have made half a dozen comments in the past two decades about each other, but it only takes a rudimentary bit of Google Fu to find them all, and seeing them grouped together like that gives the quotes even more venom and spite.

I’m dipping deep into my big box of hypocrisy again, because I do follow this story, and take note of any new elements. The funny thing about that Lethargic Lad cartoon is that the character does spend the vast majority of the strip intently reading the column that drives him crazy, and that’s how I feel sometimes.

But observing isn’t the same as taking sides. There doesn’t always has to be an us-or-them mentality. It sometimes feels like you have to stake your moral point somewhere, and if you don’t, both sides will think you’re against them, but there is always a place for neutrality.

There are things in this little world of comics that are worth taking a stand on – there is no excuse for not standing up to obvious injustice and cruelty. I’m automatically on the side of any artist who is in a fight to get his art back from a publisher, no matter what shitty contract the artist signed, because I truly believe they have an irrefutable claim to ownership, (unless they sell it for themselves), and I don’t need to buy anything by Orson Scott Card, because he’s a dick.

And there are even some feuds where you can’t help taking sides, where one side does a spectacularly bad job of stating their case, or is just obviously in the wrong. You’re not a proper human if you don’t get a bit judge mental on things that really do matter.

But the case of two British comic writers who don’t particularly get along barely ranks as important. It’s entertaining as hell, because both men are witty and intelligent writers, but it’s not important. And I can like both of them, if I want.
Posted by Bob Temuka at 11:42 PM