The Matrix Online and the uncoolest thing ever 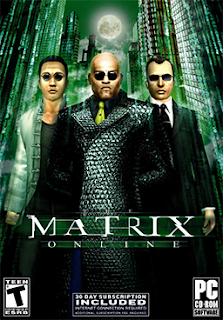 The mighty Walrus was victorius... until Darbacour appeared on the scene. With amazingly fast and brutal moves, Darbacour laid out Walrus in almost record-breaking time.

"I hit Walrus with Disrupt Inputs, White Noise and then Logic Cannon 2.0," Darbacour explained after the duel.

"The first two are debuffs that immobilized him in order to allow Logic Cannon enough time to deliver its payload before he could Interlock me. I love the Walrus, but I love PWNing him even more."

- An excerpt from an advertising insert that was published in a bunch of comics in the mid-2000s, trying to convince people to play the Matrix Online, apparently by writing down some of the dorkiest sentences in the history of the written word.

I think about this passage a lot. It's the uncoolest thing I've ever read in my life.

The game died after a couple of years, but I kinda hope Darbacour is still out there, feeling pride in the way they destroyed Walrus. I hope somebody got something out of it.