DC reboots: In need of the hard cut 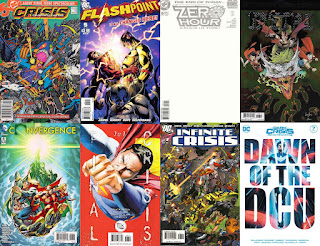 The DC universe appears to be rebooting literally every six months now, which means we may soon reach some kind of reboot singularity, where the Justice Society are always returning and disappearing at the same time. Should be great.

The unfortunate thing about all this is that none of these restarts of the entire multiverse have really worked, going all the way back to the original Crisis on Infinite Earths, because they're always too scared of alienating existing fans to do a proper hard cut.

Any reboot at DC - right up to the latest attempts - is always scared of the recent past, and don't want to mess up stories that current readers have invested so much in. The core audience for DC comics in the year 2022 is hardcore, but easily angered, and don't want to be told that those stories don't matter.

Of course they matter. Whatever Happened To The Man Of Tomorrow still matters, just because it's 12 continuities ago doesn't mean anything. It still has resonance, and the 50 years of Superman comics that came before it - and the 40 after - all do too.

Burn it all down, I say. If you're going to reboot an entire multiverse, show some guts and make it a proper reboot. Start over from scratch. The old stories are still there on the shelf, and still matter, they're just a universe away.

But really draw the line, and stop telling the same stories over and over again. Try something new.

However, that would be admitting that the 86-issue Green Lantern saga about how being bright yellow makes you angry didn't mean anything, and we can't have that. Crisis On Infinite Earths was fatally undermined by bloody Hawkman soon after the new continuity was established, and the cracks only got deeper.

Now the contemporary reader is told that The Killing Joke and the death of Superman all happened, and we'll just ignore the continuity errors, and just make up our own version of how it went down. It's all completely unnecessary with the hard cut, if DC could ever have the guts.