Doctor Who: When you're not looking 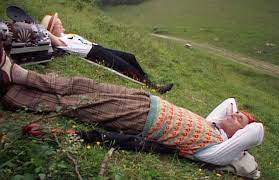 Just when the original Dr Who was fading away at the end of the 1980s, the young guns who grew up under the Doctor's watch got their hands on the character and got away with some surprisingly complex ideas.

Most obviously, there was the Cartmel Plan, which soon became known for the deepening of the history and opening new mysteries behind the good Doctor. Stories got more political and more allegorical, and even as the budget started to dry up, the ideas soared into space.

But it wasn't just the ideas and themes and things like that, it was the way they were presented for their young audience. Watching them recently - as I start on the last leg of a complete rewatch of Doctor Who that started nine years ago -  it's striking to note how the storytelling suddenly gets more sophisticated in the Seventh Doctor's final TV adventures.

There is no secret that script editor and his writing team were trying to do the sort of things people like Alan Moore were doing in comics, slapping the sharp metaphors and grown-up themes on things designed for 8-year-olds. But the new sophistication is also there in the basic storyline - there is a lot happening between the scenes, and there's entire stories behind the adventures we actually see on screen.

Silver Nemesis relies on events that took place centuries ago; Battlefield has the Doctor's escapades as Merlin take place offscreen and in a future incarnation, and The Curse of Fenric isn't the first time the Doctor has had to smoke his most ancient foe with a game of chess.

The sets were as wobbly as ever, but this was confident stuff, expect the audience to keep up with huge bits of plot that you never get to see, but are vital for the story.

None of it stopped the series from the yawning void of cancellation, and with all due respect to the magnificent Paul McGann, it would be another 15 years before the Doctor would really come back.

But this mood of confidence and experimentation and outright reverence for everything the Doctor stood for, and this mode of storytelling with hidden depths that go far beyond a BBC soundstage built up in novels and audio adventures and in the show itself when it finally came back.

Because even as it died its first death, Doctor Who was starting to show that it could do anything, and that it was really easy to keep up.