Walking away from the Dead


For several years now, the Walking Dead TV show has got by on a very successful formula – 50 minutes of pontificating and angsting and crying, with 10 minutes of astonishing action and some phenomenal make-up effects work.

That was more than enough for a few years, but the open-endedness of the whole story, whether it's TV or comic book, starts to become a grim shamble through the apocalypse, and it proves easy to give up. 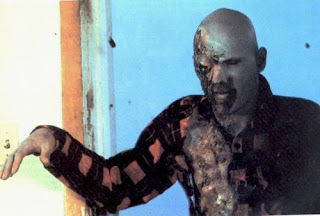 Zombies have always been my favourite monsters – there is real horror in the plodding decomposing masses, shuffling forward in silence, and then unleashing torrents of gore when they get their decaying hands on some poor soul. They're the only monsters I have serious nightmares about.

Romero's Dawn of the Dead is, without any irony, one of my top five favourite films ever. I am unfortunately intimate with the zombie work of Lucio Fulci and all those other hack Italian directors who loved to throw guts at the screen. I still think ...28 Days Later is one of the great horror films of the 21st century, and I got every daft gag in Shaun of the Dead.

And I watched every episode of the Walking Dead, even as its main characters began to turn into fucking fascists, and even when it weirdly turned into 'Rick is the messiah!'. Because there was always a spark of humanity, or the odd witty line, or a beautifully put-together piece of make-up work. (I'm also a total child of the Tom Savini/Rick Baker/Rob Bottin era of gore make-up, and I'm constantly and pleasantly surprised by the amount of hardcore gore they get away with on modern TV screens.)

But I've become one of the horde who seem to be stumbling away from the show, having stuffed our rancid guts with enough of that story now. 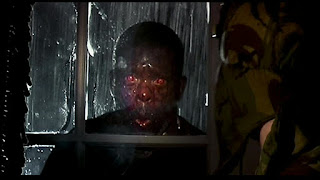 It's not that it's run out of steam - it's still smashing ahead with its plots and drama, ratcheting up the tension and pressure until it explodes in grim, sudden action.

But there is a growing sense that it has said all it really had to say, and is now just going back over the same old ground.

The whole point of The Walking Dead is that it carries on with the story, when all other zombie stories end with some kind of climactic carnage, and the survivors - if any - stumbling out into a grim new dawn. It's playing a long game, showing how people change over months and years, in almost real-time. But it's now made the point that the living cast are actually the title characters 10 times over, and in a quest for drama, has spiraled down into inevitable conflicts with murderous arseholes, over and over again. 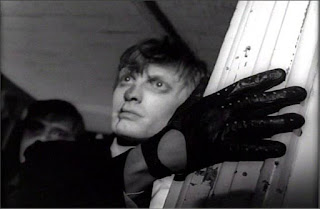 I also totally lost interest in it at the same time as the comic, right around the same period it had been running, and all the grimy, gritty characters started to flow into one, and it had casually killed off a lot of the people I actually cared about, and replaced them with characters I don't.

So the appearance of Negan, who isn't really as interesting as the creators of both show and comic seem to think he is, has been a natural end point for following both versions of the story. It’s a good place to stop. 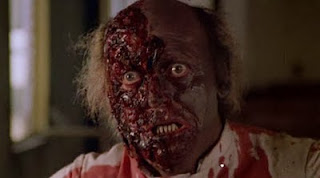 It doesn't sound like I'm the only one to get a bit itchy over the Walking Dead, with ratings at their lowest levels in four years. Maybe there really is just an objectively obvious end point for all these gory shenanigans, or for almost any TV show – there are very, very few shows that have lasted much longer, without a serious dip in quality.

Or who knows? Maybe the new main villain – a loud, talkative braggart who talks utter bullshit and resorts to smiling threats and dickhead thugs to get his way – is just a bit too much right now. There is enough of that shit in real life, you know?

Or maybe we just all really fucking liked Glen, and we're just pissed that they killed him off. He was a fucking survivor, man. 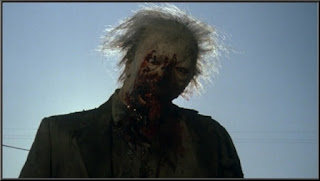 As part of my determination to remain a huge fucking hypocrite, I’m still going to be watching Fear The Walking Dead, because even though it is full of the same kind of jerks, and the same kind of dubious morality, and gives some talented actors some total dogs of lines, it is still new, and hasn't quite shuffled out of ideas yet.

Plus, Frank Dillane is bloody great, and I wish the whole show was just his story. 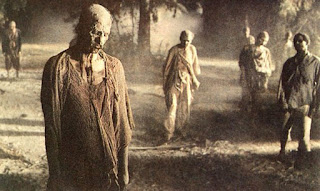 There is little chance of the Walking Dead actually coming to a full and proper conclusion anytime soon. Ratings may have dropped, but it’s still sticking a knife in the forehead of other shows.

Maybe the main characters should just move away from this terrible part of the country, where everybody is killing the shit out of each other, because it doesn’t seem to be working out for them very well so far around Atlanta. Maybe just a few hundred miles away, everyone is getting along fine, and has withstood the zombie apocalypse by co-operating and working together as proper communities, instead of roving murder bandits, and are appalled by their neighbors’ bloodthirstiness.

(I like to think that New York has actually done well out of the end of the world, and survived by pulling together and turning Central Park into a hiuge corn field or something, because New Yorkers are fucking tough, but also huge on community and working together with different cultures. (I also like to think they actually call them zombies there, instead of walkers, or biters, or rotters, or whatever, because they're grown-up enough to own how fucking silly it sounds, and don't waste time trying to come up with new names for things that are obviously zombies. (Like comic nerds who have to use the term 'graphic novel' all the time, because they're shamed by how juvenile 'comic books' sounds. Fucking own it.)).

It will almost certainly be worth watching the odd YouTube video of the best of the show in the future, just to see what they’re doing next with all those wonderful, wonderful gory effects.

But there isn’t much need to actually watch the whole show anymore. Not when it has less to say than the groaning, moaning dead folk outside the gates.
Posted by Bob Temuka at 1:37 PM