When my lovely wife and I first hooked up, we lived hundreds of kilometers away from each other, and kept in constant contact by phone and e-mail. Which worked out fine for a while, although she kept ringing when the first season of Battlestar Galactica was on TV, and I was, naturally, much more focused on her than the adventures of Starbuck and chums, and totally lost track of the series.

It took a few more years to catch up on it all, and we both watched the last few seasons together in our cozy Auckland flat. She liked all the foxy boxing and Saul Tigh and his amazing emoting eye, and I liked the metaphysical malarkey and Baltar's complete and ongoing failure at being a decent human being. 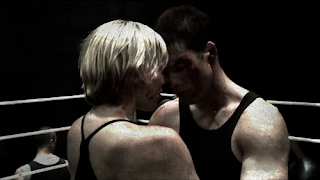 But it was only a couple of weeks ago that she actually saw the original series, on some vintage TV channel. I'd grown up on that crap, watching shitty patched-together episodes posing as feature productions at the local cinema, but she's a bit younger than I am, and she hadn't seen a single minute of the original Battlestar Galactica.

And she was appalled. She could handle the magnificent seventies hair, and even the boorishly repetitive special effects, but she couldn't handle how goddamn cheerful everyone was, arguing with some logic and passion that there was no place for cheesy, blinding smiles after most of your species has been wiped out.

She had a definite point, but I had to defend the honour of the original, if only because those flight jackets they wore are still the coolest fucking thing I've ever seen on a science-fiction television show. 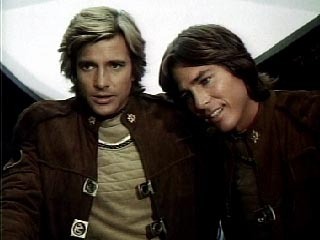 And because it was an argument that neither of us could win, it all degenerated into blatant accusations that the other person was just plain wrong, and from there it degenerated to me loudly singing the theme song to the original, while she did a warbling semblance of the rebooted series' main tune.

If the neighbours are ever sneaking a peek while we're doing this, we must look like absolute fucking idiots, but it makes us laugh, and that's all that matters.

You have to agree on a lot of the big stuff when you're in a long-term relationship, and you can even disagree on a few important things – we do still have awful arguments about the moral relativity of the death sentence – but you should always have your differences of opinion about the dumb shit you watch, read and hear. 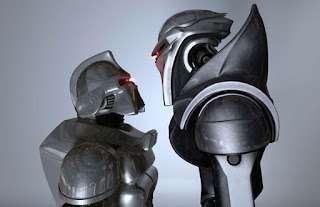 We got married exactly 10 years ago today, and it's absolutely been the best decade of my life. We've seen some things, and done some stuff, and had some stupid fights, and she's made me a better person. She tolerates, and even occasionally condones, my ridiculous obsession with comics books and other nerditry, and I'm baffled by her love of craft-work and horse-riding. She is an exceptional baker, and smarter and funnier than I'll ever be, so when I make her laugh, it's like gold.

I could spend all day singing her praises, and often do. But we're off to stay in yurt in a beach town for the weekend, so there isn't enough time. We've got to go, and she's letting me stop at the comic shop on the way.
Posted by Bob Temuka at 10:19 PM

Dueling Theme Songs has to be the best way to have an "argument" in a relationship. Congrats, you two.