20 things I learned from the Mighty One 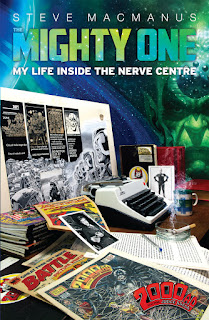 While current 2000ad editor Matt Smith is definitely one of the great Thargs, maintaining a high level of quality thrills for more than a decade now, there is little doubt that if you ask anybody who the greatest editor of the comic ever was, the answer would almost always be Steve MacManus.

MacManus was editor during the comic's absolute golden age in the early to mid-1980s, with outstanding work from writers and artists at their total prime, producing week after week of essential and instantly classic stories, and printing them out on paper that wasn't much better than bog roll.

He's recently written Mighty One: My Life Inside The Nerve Centre, all about his career. And it's a cracking read, from his early days when all the editors were alcoholic war veterans hidden in clouds of spite and cigarette smoke, to the days of corporate takeovers and celebrity creators. He isn't afraid to admit there were times when he was a total shithead to people, but at least he can stand up and be accounted for it.

It is, obviously, full of entertaining anecdotes and fascinating trivia, and this is a tiny fraction of the things to be learned while reading Mighty One: 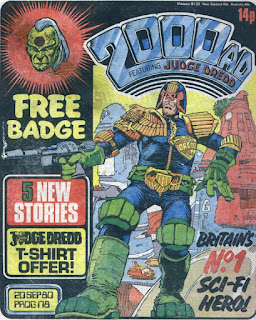 1. MacManus never thought of 200ad as a science-fiction comic, at least not in his early days as editor – it was an adventure comic, that just happened to have a lot of stories set in space, or the future. They were still cop stories, or war stories, or sports stories, even with all that fashionable sci-fi.

2. He originally decided to write a book about the experiences as editor back in the very early nineties, so he had time to get his stories right. (Neil Gaiman was also planning a book on Alan Moore around the same time, which sounds like another great missed opportunity.)

3. If you get called into the boss's office, after running a story that satirised an industrial strike that cost the company a shedload of money, show up dressed as a Betelgeusean, and let them now that heavy is the head that wears the Rosette of Sirius. It can only help. 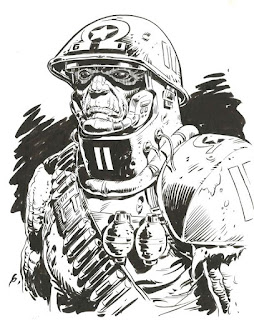 4. Rogue Trooper's title was inspired by Geoffrey Household's Rogue Male novel, which I just read a few months ago. It's pretty messed-up.

5. John Wagner's long-running T B Grover pseudonym, on the other hand, was based on a bully in a radio play named 'Tubby Grover'. 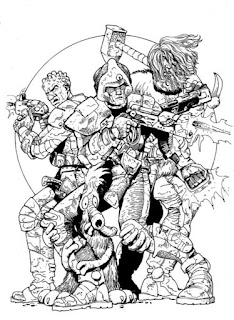 6. I had to have it pointed out to me that Middenface McNulty's first name actually means 'Rubbish- face', with a hint of shit. Get me drunk enough and I'll insist Middenface is the greatest comic character of all time, but when I pointed out this new information to the lovely wife, she said I was an idiot for not knowing what a midden was.

7. Get me even drunker, and I'll swear that it's actually Wulf Sternhammer and his happy stick that is the greatest comic character ever, but he almost started out as a “wisecracking Manhattan taxi driver”.

8.Every war comic strip involving a German anti-hero in WW2 had to end with the tough son of a bitch standing in the ruins of Berlin as it fell. 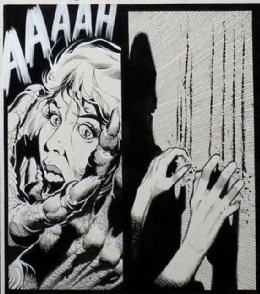 9.  The first victim of a man who has turned into a dinosaur in the classic Judge Dredd story the Blood of Satanus was originally supposed to be Dredd's ex-girlfriend.

11. They used to be allowed to give away spud guns as free gifts.

12. Artist Ian Gibson is actually in Halo Jones, as a pest badgering a female at a party. 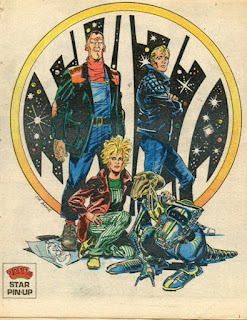 14. If you're trying to impress the suits with the fact that your new comic is down with the kids over the green issues, talk about some whales and play some Enya. 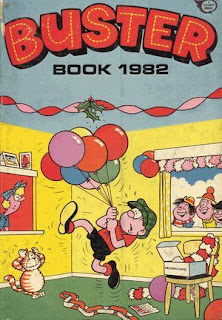 15. Buster was the spawn of Andy Capp? It's a bit obvious now, but I still needed it to be pointed out.

17. When Bolland's first pages for the first Judge Death story started rolling in to the office, everyone was blown away and awestruck, and MacManus couldn't get past the fact that one of Judge Anderson's nostrils was bigger than the other.

19. The Fleetway archive had 10 million pages available for syndication in the 1970s. Ten million! 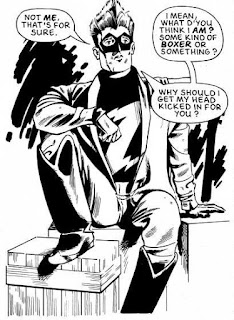 20. The last thing MacManus ever did as editor of 2000ad was give Morrison/Yeowell's Zenith the green light. We could argue from now until the end of time over when the bronze age in American comic books finished, but if you want a clear line between classic 2000ad and the shiny new generation, it's right there.
Posted by Bob Temuka at 2:49 PM