The late, great Mark Gruenwald wasn't a brilliant comic book writer – his plots were often hackneyed, his characters were damp, and his dialogue was cheesier, and riper, than a 17-day gouda – but he was a terrific ideas man, and he could see which way the wind was blowing.

He was way ahead of his time with his Squadron Supreme series in the 1980s, with ideas and concepts he introduced there still being successfully mined by contemporary creators. And he could see the audience for superhero comics getting more bloodthirsty, so he got Scourge to walk into the Bar With No Name in an issue of Captain America, and blow away 18 supervillians with some explosive bullets. 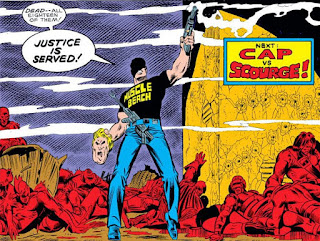 In this day and age, when Wolverine happily guts anybody who looks at him funny, or when every second superhero comes equipped with some high-powered weaponry, it's easy to overlook how unsettling the Scourge saga was in 1980s Marvel comics.

The Scourge character (or characters) popped up in a dozen different Marvel comics over a year or so, shooting some costumed villain dead in cold blood, hollering 'Justice is served!' and disappearing again. He (or she) could show up anywhere, or kill anybody, and the random violence was often used as a grim punchline to some other ongoing storyline.

While many of Marvel's top talents had their shot at a Scourge cameo, it all came to a head early in Gruenwald's mammoth Captain America run. Some of the villains banded together and met at the Bar With No Name to discuss the murderous problem, only to be brutally killed by the bartender. And then Cap took down the villain, only for him to be killed by yet another shadowy killer, in a Russian doll of psychopathic vigilantes. 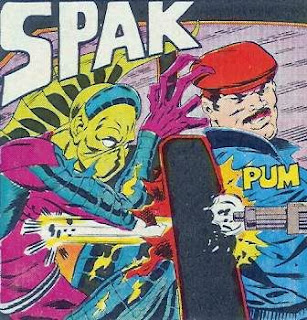 This kind of carnage would become regular fare in the trigger-happy 1990s, and there had certainly been plenty of death and gore in Marvel comics before, with the Punisher mowing down legions of unnamed goons since the seventies.

And it was certainly the sort of things you saw in plenty of For Mature Readers comics at the same time, with even the immortal Batman dragged into some awkward adult violence. This sort of violent nihilism wasn't exactly unknown in comic books at the time.

But this was something new for Marvel in the 1980s, as the company tried to shake off the stagnant air of a 20-year-old comic company, looking for a new direction. And the sheer amount of corpses left behind was new, with damn near half of the Book of the Dead volumes of The Official Handbook Of The Marvel Universe (Deluxe Edition) filled up with Scourge's victims at that time.

And it was just so brutal. Scourge killed women and cowards and reformed henchmen. One female victim met her end while showering after a wrestling match, and the killer frequently appeared out of nowhere. He could disguise himself as anyone, and any character could suddenly become a cold-blooded murderer.

Editorially, Scourge might have been nothing more than a good excuse for disposing of some of the Marvel Universe's dorkiest villains, including some that went all the way back to the earliest days of the publisher. But it was also unsettling, and you couldn't help but feel sorry for the poor bastards who ended up facing the wrong end of his gun barrel.

The history of Scourge was later revealed to be a vast conspiracy, and some version of the character still pops up every now and again. And even all those villains that were killed have been resurrected, with The Hood bringing almost all of them back to life for no real good reason a few years ago.

And those Captain America comic are as clumsy and stilted as most of Mark Gruenwald's stories, but they have those hints of the future, that plenty of other creators still use. While Scourge's victims never lasted long, the legacy of his initial appearances still lives.
Posted by Bob Temuka at 4:42 PM