Love and Rockets: All the young punks


Love and Rockets is still the coolest comic there ever was, is, and will be. After more than 30 years of absolutely brilliant comics, the Hernandez brothers' work remain second to none.

The latest annual issue of Love and Rockets – the last to come out in this format – has been released in the past week, and is more than welcome, because it’s just as fabulous and thoughtful and real as it ever was. 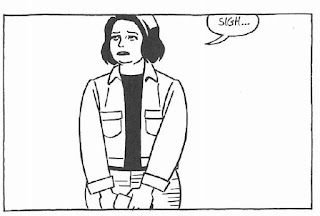 After years and years of producing brilliant, heart-wrenching and beautiful comics, it would be so easy for Los Bros Hernandez brothers to give their devoted audience exactly what they want.

It would be so easy for them to just do more and more stories about Luba and Maggie, and just tell stories of these weird and wonderful women, and their fabulous friends and family, and just focus on that. Building up a body of work like that, creating a small and personal mythology, is a worthy goal in life.

Or, you could do what the brothers do best, and go wherever their whims take them, with goofy, energetic and slightly disturbing new stories that are as good as any of their classic work, while still making room for catching up with old friends. 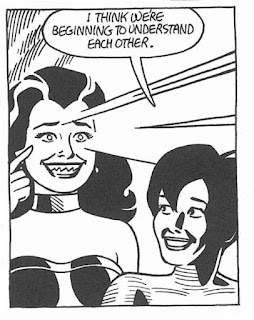 The artists keep their various long-running stories moving in various interesting and emotional ways, but still have the fiery passion of doing something new. There is always room for a bit of experimentation, or for some plain old fun.

They have always done this. Issues of Love and Rockets, in any format or volume, have always had that mix of stream-of-consciousness wackiness and madly ambitious world building, right back to the earliest days. And they’re still doing it, never content to rest on their considerable laurels, or take it too easy. There is always something new to say. 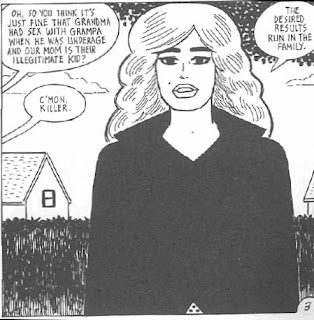 So while Gilbert’s comics expand his ongoing saga of Fritz and her family into new and sordid directions, with strange doppelgangers and insidious lineages, he has still got room for the goofy and gory adventures of Aladdin, as he continues to blur the line between movies and reality in his world.

Actually, for once Beto isn't the one going off on a crazy unrelated tangent, with all of his stories in #8 taking place in the same universe as his whimsically jagged Palomar tales, but they are a long, long from the world of fried slugs and submerged sculptures.

It’s far more of a head game, consumed with questions of identity, all laid out in the artist’s typically straight-forward style. His cast of characters has grown so vast, and he still brings in more and more people, populating it all with reincarnations and rebirths, new clones and old ghosts. Fritz is still there, but this is a murkier, darker corner of her world than we have seen before. 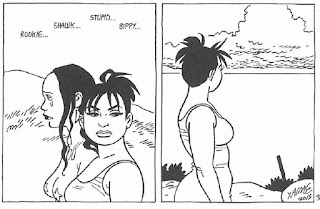 Meanwhile, Jaime’s comics are even more frenzied in their rush to do new stuff. The anarchic sci-fi adventures of Princess Animus continue in new stories, while the new adventures of Isla Guerra have a familiar Jaime character in an unfamiliar location – a young girl stuck on a idyll Pacific island dreams of bigger things, only to have them dashed against the deadly sharks of reality, and then her story crash bangs into the galaxy-spanning looniness of Animus' glorious nonsense.

And the Locas world continues to expand with the ongoing story of Tonta and her crew, taking them on a little bit, growing up so fast. Viv remains Viv, and Angel's painful downfall is never clearer than when we don't even get to see her properly. (Queen Rena operated the same way - Beto isn't the only one playing with the idea that these people keep having the same stories over and over again.)

If nothing else, it's all worth it for the still astonishing beauty of Jaime’s staging and body language, on show for all to see again. Check out the posing in this panel – the straight back of Tonta’s greeting, the coiled nerdiness of her best friend, even the casual flick of the hand in the girl walking past. It’s a perfect piece of comic panel staging, and every character, no matter how minor, has a life. (And that’s without getting into the balls an artists needs to break all the proper rules of storytelling and start off a story by showing the main character from the rear.) 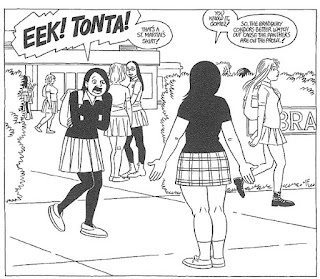 The new directions that Jaime heads down are an essential part of a living artist, but there is no denying it’s so good to see all his young punks from years ago together again, a bit more wrinkled and a bit more swelled, reunited in another endless night at a dirty punk gig.

It’s right at the back of the new book - after promising the return of all sorts of old faces in the last 2015 issue of L&R, Jaime only returns to that world for the last 17 pages of L&R #8, but it’s just so fucking good.

In those 17 pages there are plenty of characters showing up for the first time in years – Joey Glass in the same old tee-shirt, with a brand new beer gut; Daffy and her too-cool-for-school daughter; Terry still failing to ever connect with Maggie; Izzy back in the world briefly; and holy shit! Is that Mike Tran? 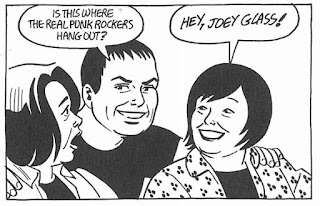 It’s the same old story with the same old faces, they’ve gotten older, and jumping in the mosh pit might actually kill them now, but Maggie and Hopey are having another dumb argument, while La Llorona gets ready to play.

It’s the old story of not being able to go home again, and about the great bullshit and utter reality of the generational divide, and how some nights, you just can’t get away from the place you’re stuck at, and how new people can sound interesting in theory, but turn out to be weird and boring snobs. And it all ends with two wonderful silent panels, of the same old story going on, and some things never change, no matter how many wrinkles there are. Best to just go with it. 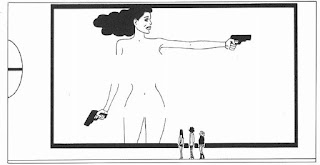 It’s a little astonishing to think the New Stories have been going for eight years now, but it is time for a change. It’s been an absolute thrill to get so much Love and Rockets goodness in one shot every year, but can lose the details in the long wait between issues, and a more regular schedule would help fill those gaps.

But it doesn't matter if Love and Rockets comes out four times a year, or just once, it's always fucking amazing, and still so fucking cool.
Posted by Bob Temuka at 8:56 PM

I have been reading L&R since i was 12 yrs old. I'm 43 now. It has been an amazing influence in my life. Far beyond any other "comic book". BLESS Los Bros. I'll buy anything from them regardless of format. Oh, & very nice article as well!