The death of the Ultimate


Marvel's Ultimate comics universe is coming to an end again, with the best bits and pieces of the entire world being merged into the proper Marvel universe. Ultimate Spider-Man - unquestionably the most successful comic of the line - will carry on, but everything else will just fade away.

This is not the first time they've promised some big climax to the Ultimate line - there have been at least four other promises that it was all over - but it looks like the most permanent. Even with some interesting talents behind the scenes, it's been steadily declining in sales and buzz for more than a decade, and right now it's a bit of a mercy killing.

The exact moment the Ultimate line started to die is a debatable one - it could be about the time of Jeph Loeb's awful Ultimatum story, or when they rebooted all the titles for the fourth time. But as far as I'm concerned, it was all downhill from a very early point, and that point was exactly 17 pages into the first issue of Ultimate X-Men. 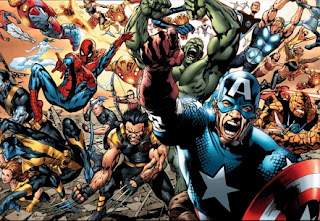 The Ultimate Universe did look shiny, new and exciting when it launched in 2000, but that wasn't hard, considering the glitzy dullness of the regular Marvel universe for the previous decade. Nobody seemed to know what to do with the Avengers, or X-Men or Spider-Man, with stories in the regular universe continually circling the drain of mediocrity for the past few years.

And then came the Ultimate comics, and they really did look like something fresh. The artists had to be old pros to get things up to the standard level, but the writing duties went to a bunch of young punks like Bendis and Millar, who took just as much delight in poking fun at the conceits of Marvel's superheroes, as they did in reverentially referencing them.

With equally inexperienced hands at the top of the Marvel editorial ladder, and after all the life had been drained from its massive cast of regular world characters, the Ultimate creators were encouraged to go wild and shake things up a bit, and give it all more of a realistic  sheen. And for a while, it really did work. 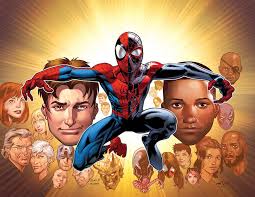 When Ultimate Spider-Man came out, it tried a little too hard to be the first great superhero comic of the 21st century, but it damn near got there anyway. It soon built up a rock-solid corner of its own in Spider-Man mythology, with consistent work from both Brian Bendis and Mark Bagley, who had been rendering the slickest of slick superheroes since his wonderful, brilliant and dumb New Warriors days

And, due to the fact that I lived hundreds of kilometres away from a comic shop at the time, the next series I read was the Ultimates, which was just as awe-inspiringly glossy and snarky and fun, to the point where it's arguably the biggest single influence on the entire Marvel cinematic universe, and partly responsible for the billions of dollars it generates. 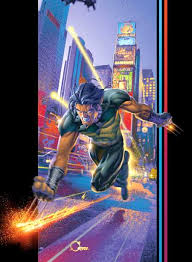 The future looked bright and new and interesting. And then I read the Ultimate X-Men.

I would like to make clear that I actually enjoyed a lot of Mark Millar and Adam Kubert's Ultimate X-Men comics, they're really well-paced action blockbusters with a wickedly nasty sense of humour. Millar's mad attempts at creating post-human societies really don't work, but they certainly made a change from the tired old 'protecting the world that fears them' angle. It pointed the whole mutant metaphor in a new direction.

But then I got to this, and I knew that it might have been a  new direction, but it was still ending up in the same old place: 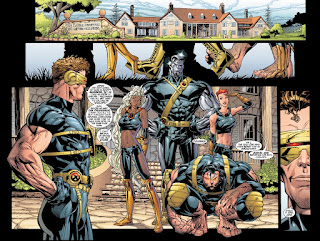 The characters were younger and the attitudes were sharper, but it was just the same old shit. Same dorky - and surprisingly forgettable - superhero costumes, same old posing. All the hope of a new look turned out to be the same old guff. Nothing new to see here.

It was particularly weird at the time, because the contemporary stuff was Morrison was doing in New X-Men did take these new ideas about evolution and change and do something new with them, with the mighty Frank Quiteley designing uniforms that didn't look like anything from the past. When the old school were showing the new school how to do it, the young pups didn't stand a chance. 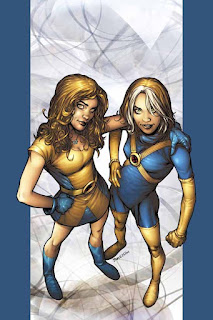 And that was that. The Ultimate line lost that sheen and never got it back again. There were more decidedly average limited series, as more and more creators came and went on the core title, and everybody singularly failed to do anything interesting with the Fantastic Four, (which made the recent movie's constant name-dropping of it in pre-publicity a bad sign).

And now it's running out of time, but that was always going to happen when it tried to mix more superhero bollocks into real-world situations. The Ultimate universe was built of the foundation of the world outside your window, and it's unique selling point was always meant to be that it was more identifiable than the regular Marvel Universe and its decades of continuity.

Again, you can see all that already going wrong in Ultimate X-Men #1, when the very first pages already showed this Earth was so different from our world, because it was a place where random people can be blasted away on the street by giant robots and nobody bats an eye, with the same kind of dumb hatred on the part of the general public that felt so 20th century.

From there, the Ultimate world got so screwed over, with millions of people dying in superhero bullshit, that the world was left shattered by the exposure to superheroics and parts of the USA turned into Mad Max territory. This was nothing to identify with any more. 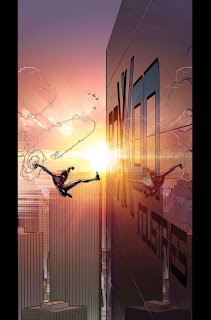 Once the Ultimate crowd starting living in this science-fiction nightmare, it lost all that real-world charm, and the dire predictability seen in that first team shot of the new X-Men led to the usual creative dead-ends.

Marvel should have known this was always going to happen, when you try to explain how superheroes would operate in the real world. After all, they had to blow up the New Universe in the 1980s when it got too complicated. Still, that only took three years to run out of fire, and in that respect, the Ultimate has done all right out of its 15 years.

But for all the successes - and again, Spider-Man has done very well out of the Ultimate world, and Miles Morales is an excellent addition to the Spidey saga - few will really mourn it when it's gone for good. 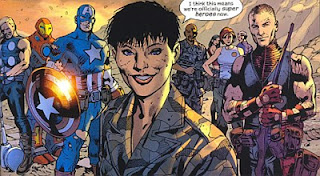 Which is a shame, because some of those early Ultimate titles do still have a lot of bite to them, and the fact that they never quite lived up to their potential can't be blamed on the original vision.

If anything, the Ultimates' influence on the entire Marvel cinematic universe shows that this vision was clear. It's certainly more financially successful in 2015 than anybody could have imagined in the year 2000, and has helped take Marvel's stories into unexpected new dimensions.