Ennis has been asked these types of questions for about a quarter of a century now, so he's gotten really good at coming up with a response. He will patiently explain that even though his comics are filled with strange and terrible sights, it's okay, because none of it is real. It's just words and pictures. Lines on paper. No actual people were harmed in the making of his comics.

He will usually go on to point out that this is a concept that most people figure out by the time they're three years old, and he's a bit baffled why grown-ups have such a problem with it. And then he'll move on to the next question. 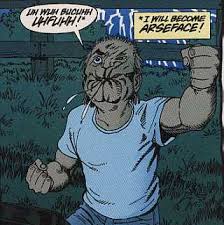 Ennis is being both totally disingenuous and completely truthful when he makes these arguments. Of course his stories are more than just lines on paper - all stories are more than just that. They're containers for ideas; interesting and crazy and entertaining ideas. They can make us think in different ways and change us as people. They can also be full of harmful ideas, and cause all kinds of grief.

But he's also right. It's not real. None of it is real. And I know it sounds awfully callous and privileged – and I do have serious concerns that there is something important missing in my brain - but I don't get personally offended by the sex and violence I find in the fiction I ever consume. Ever. 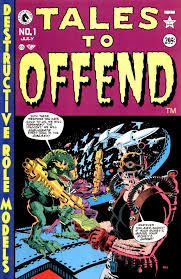 Hell, I seek out the intentionally offensive, always with a clinical eye on seeing how far people will go to prove a point, no matter how gross and sticky it gets. A good, hard dedication to extreme fiction is inevitable when you're seeking out the utmost intensity in your stories.

Obviously, I still won't tolerate anything blatantly sexist, racist, homophobic or anything like that, and I'm only too glad to see those things get an ideological slapping, because we're supposed to be better than that. But while I find these things appalling, I still don't have a personal stake in these fights. A dumbass comic is just a dumbass comic, disgust doesn't rise into outright offence and ignoring it through the power of total apathy is the only sane response.

So I stay out of those arguments altogether, and let some genuinely noble cultural warriors fight that good fight, even if I often think they're wrong. 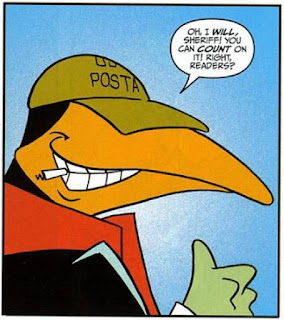 I can't help speaking from a perspective of privilege here – I'm a white heterosexual male. My people ain't been persecuted, we've been the motherfuckers doing the persecuting for the past millennia or two.

You can make fun of my culture all you want, because it's an oppressive and omnipresent culture that has swallowed up all the rest and deserves all the shit it can get. I'm totally in favour of new ways of thinking, and I actually really like seeing pale white guys get humiliated and belittled, because we fucking deserve it.

But as much as I cheer that on, I'm still on the side of The Man, just because of who I am and the advantages that have come with it, and I'm painfully aware of it. I don't have that powerful personal response to something which can be properly upsetting for people with other points of view, who have been pushed down their whole lives, and I don't want to add to the shoving, in any direction. 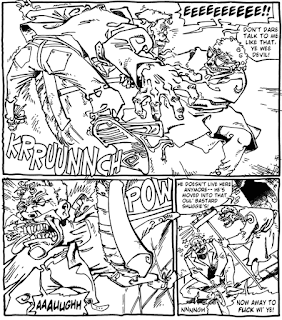 And I'm not a total monster. I still get offended by all sorts of real world shit - inequality, greed, selfishness and ill-treatment of our fellow human beings are things I still find deeply upsetting. What sort of person doesn't get offended by the great injustices of the world? They make so angry sometimes I choke on my own frustration.

But I just can't get that bothered by something as frivolous as silly entertainment. There is a lot to take offense at in this world, stupid movies comic books come way down the list. 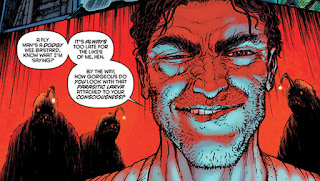 And I do actively seek it out. Stories that push the envelope are always interesting, I look for intensity in my art, and that often ends up taking me down ideologically suspect lines.

But I can't help it - I still think it's hilarious the lengths some people will go to be offensive without being outright horrible. I enjoy seeing how far Mark Millar goes with his blasts of stinky comics -  I'm not ashamed to admit I have a real soft spot for his Unfunnies, which I know I'm awfully alone on - and I always like seeing how far Warren Ellis and Grant Morrison occasionally go. Morrison is currently doing his worst in Nameless, which would be even harsher to take if the narrative wasn't deliberately eating itself alive, while Ellis hides his beautiful soft heart beneath layers of nastiness.

And all these nice British lads - even Ennis - ain;t got nothing on the things that were going on in the US undergrounds of the 1970s, or the bonkers Japanese scene of the late 1980s. There were all new levels of depravity there, they don't just push the envelope of taste, they turn it inside out and stick their dick in the results.

It's still happening - in between tales of heart-wrenching epic family dramas, Gibert Hernandez regularly lets his id run wild all over the page, with some appallingly beautiful result. When Beto goes far out, he really goes far out. 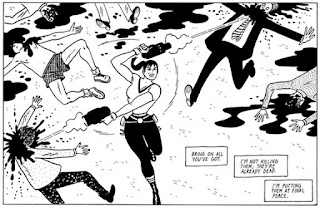 And why not? Go hard or go home! If you're going to go for the hardcore violence, then you really need to push it all the way. Any whiff of restraint and you're doomed. 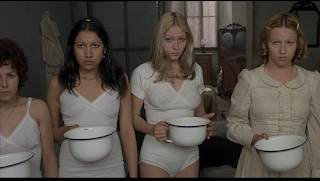 I do still have my limits, and it's usually for purely aesthetic reasons - I don't like the Crossed comics at all, even as I sneakily admire their ability to get really depraved, it's still nothing I actually want to read (especially when they feature the usual butt-fuck ugly artwork of Avatar comics), and I can sit through Pier Paolo Pasolini's Salo, or the 120 Days of Sodom, but it's not something I ever need to see again.

But I don't want to ban these things, or stop anybody else from ever seeing them. It's your own choice how far you go, and how much offense you take at things.

I actually like the political correctness debate - as long it stays a debate, and not a rigid set of baffling, inflexible rules. I'm glad there are those cultural warriors out there, taking offense so I don't have to. Sometimes I wish I could, but I'm still happy to wallow in the outrageous.
Posted by Bob Temuka at 8:51 PM