There has always been a totally illogical feeling of value for money when you buy something like a Justice League comic book. It might have just as much actual story as every other DC comic, but when you're getting all the big heroes in one place, it's hard to avoid the feeling that you're getting more bang for your buck.

The same idea also applied to team-up books, with comics like DC Comics Presents and The Brave and The Bold successfully giving readers double the fun in the seventies and eighties, usually in sharp, short stories.

And the same idea applied to one of DC's most unlikely successes during that strange period, with Weird War Tales dosing the standard war story up with a proper dose of the macabre. 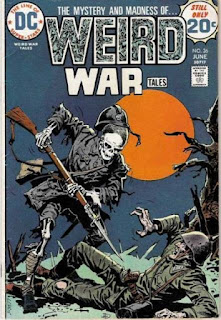 By the mid-1970s, DC had been publishing horror and war comics for a few decades, and were constantly looking for ways to shake things up a bit. They tried mixing tales of the supernatural with the western and romance genres, and produced some interesting results, but there was only one comic that really hit the right mark.

Weird War Tales ended up being published for 12 years, only dying out when DC's entire war and horror lines came to an end. That longevity was undoubtedly due to the whole appeal of the genre mix-up, and the extra kick it gave each of them.

After all, while even perennials like Sergeant Rock could occasionally be used to tell a quasi-supernatural story – which usually meant the use of a creepy-ass ventriloquist's dummy – a standard war comic like GI Combat looked pretty vanilla next to Weird War Tales, where stories of war also happened to have vengeful ghosts, arrogant vampires and grotesque zombies popping up.

For kids on a limited budget, forced to choose between the latest Unknown Soldier or Unexpected, there was something that took care of everything. 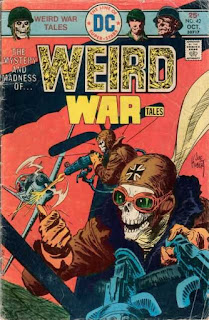 Besides this strange sense of value, there were two other big appeals behind the comic. The first was that there was a pretty broad definition of war, which meant it could go all over the place, and with a couple of dozen of pages to fill every month, the creators would often tell stories of forgotten conflicts in ancient history.

There were, to be fair, more stories set in World War Two than any other, because that was the biggest war story of all, (and only a few decades old at the time) but there were tales of conquistadors, and tommys in the Somme, and Japanese warlords, and battles against colonial overlords, and civil war horror.

There could even be stories set in future wars, with more than a few post-apocalyptic morality tales. This gave the readers even more genre thrills, now that they were getting some science fiction added into the mix, even if 99 percent of them ended with the usual 'Man is the real enemy all along!' twist ending. 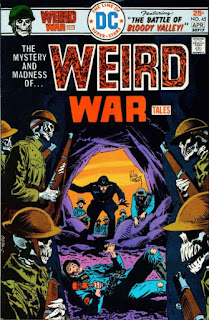 The second great aspect about Weird War Tales was one it shared with a lot of second-tier books that made it through the DC implosion of the late 1970s - they're chock-full of veteran artists doing a thoroughly professional job, and just as many future comic superstars, getting their first chance to really strut their stuff on the printed page.

The classic artists showed all the young punks how it was really done, with old pros like Steve Ditko and Sam Glanzman doing some strong stuff, while the magnificent Joe Kubert produced a tonne of beautiful covers and frontispieces.

But with three or four short stories in every issue, they were often handed out as try-out pieces for young and hungry talent. A lot of first-generation graduates of Kubert's own school get their names in print for the first time in WWT, and there is also loads of fabulous early work by Chaykin, Simonson, Miller, Giffen, Von Eeden, and some wonderful stuff by DC's woefully treated Philippines division.

Marc Silvestri even shows up in one of the later issues, and there is a lot of clumsiness in these early efforts, but also plenty of signs of things to come, while artists like the mighty Walter Simonson seemed to arrive almost fully formed. 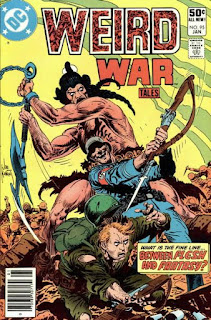 Unfortunately, they were also used as a testing ground for writers, who took a bit longer to find their feet, although there is a lot of enthusiasm leaking through from behind the word balloons.

The stories were often trite and repetitive – the moral of nearly every single story was that Death was the only winner – he showed up in some snazzy new uniform on those Kubert frontispieces every issue to remind you of it, before you even got into the stories.

But you also got a lot of crazy shit, and so much variety, that the odd clunky eight-page plot couldn't fully bury. The brevity also made it a lot easier to swallow, because any predictable or plodding tale would be over in a few pages. 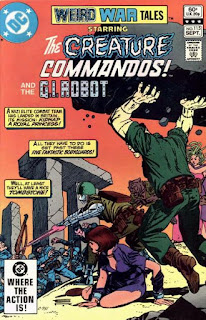 Unfortunately, by the end of WWT's original 12-year run, there was more and more of those dull stories, as the mash-up of war and horror started to run out of steam. You could only have so many angry soldiers rising from their graves, or phantom battalions coming to the aid of modern troops.

In its last few years, the editors resorted to more continuing features, in a bid to build up loyal readers, with concepts like the Land That Time Forgot, the Creature Commandos and the GI Robot showing up and crossing over. It was fun for the kids, but added a further dose of predictability as these more-focused concepts were also bled dry, and the comic eventually faded away.

It has come back a couple of times, usually under the Vertigo imprint, but despite the odd nice, old-fashioned tale, the stories tended to be a bit too clever for their own good, lacking the easy charms of the original series. 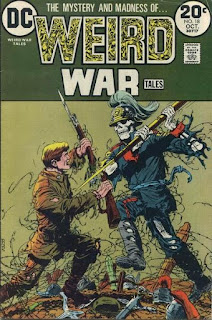 There is more than enough senseless horror on the battlefield in real life. You don't need monsters to chew up human lives in vast meat grinders- normal human beings are more than capable of that.

But the intensity of combat can combine well with the surrealism of the supernatural, and Weird War Tales proved that for more than a decade.
Posted by Bob Temuka at 5:59 PM