Who criticises the critics?

Of course, they can't see the wood for the trees, because there is a ridiculous amount of terrific criticism and strong reviews out there for anybody to find, if they could be bothered to look.

The idea that there just isn't any decent comics criticism at all any more, not like the good ol' days, keeps coming up again and again, and it always just sounds like fatuous nostalgia.

It does often come from a lot of critics themselves, bemoaning the fact that people aren't reading the same obscure things like they are, or penning long-winded think-pieces that reveal how appalling it is that tiny mini-comics out of Ohio don't get the same kind of attention as the latest Punisher relaunch.

But comic readers really do have an abundance of good criticism to choose from. It might take some time for it to appear, and it might by a case of quality over quantity, and it might actually take some effort to find, but it's out there. Okay, so it can actually take a lot of effort to dig it out. It's not just a matter of googling a title and hoping for the best, because the first hundred search results are probably just trying to sell you something.

Comics criticism is like anything else in modern pop culture – you have to sort though a mountain of chaff to find the diamonds. Print and internet media are both drowning in worthless reviews, full of flagrant shilling, pointless plot regurgitations and simply terrible writing.

And it doesn't take long to figure out that there are some particular critics that are more enjoyable, informative and, well, more fun than others. 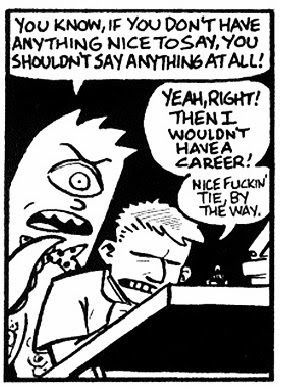 This is often a matter of taste, and not everybody has to like the same critics, or get get similar rewards from the same review. There is nothing wrong with this – some people will be more into the Don MacPherson style of reviews, while others would be more inclined towards writers like Noah Berlatsky. Considering their target audiences, they're both perfectly valid.

My own tastes towards particular critics and reviewers are fairly standard. I only just started getting my first monthly X-Men comic in a decade recently, but I never stopped reading Paul O'Brien's X-Axis reviews, and Joe McCulloch has turned the Comics Journal preview of the week's comics into a indispensable glimpse of beauty in non-American comics.

J Caleb Mozzocco still writes the best weekly mainstream comic round-up, even as price and taste force him to cover less and less actual titles, and I might not always agree with writers like Tim O'Neill or Sean T Collins, but I still appreciate their opinion and point of view.

I also read everything posted by the The Savage Critics, because they are a rare group effort that doesn't drift towards the lowest common denominator, and often feature reviews – like Abhay's latest – which have a curiously charming sense of self-loathing in their funny-book opinions. 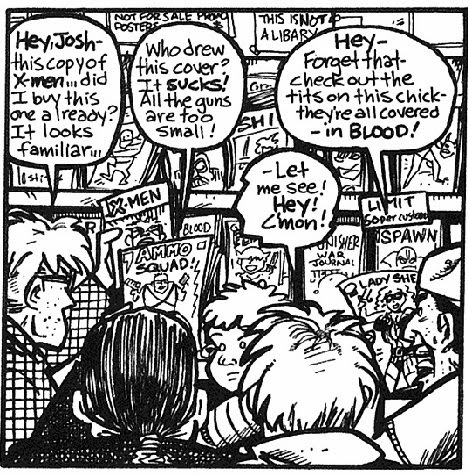 Some of of my favourite critics don't reveal their opinion as often as they used to – Tucker Stone's always-hilarious Comics Of The Weak seems to have unfortunately fallen over since it found a home at the Journal, and Alan David Doane's fantastic rants have also gone quiet, (probably because Alan's love of mainstream has been totally broken by the inexplicable mega-popularity of Geoff Johns-type comics.)

But I still enjoy the odd pieces they do, which show up here and there, and there are always other thoughts and opinions to consider. Every day, more and more comic readers write down their opinion of something they've just read, and there are always new names to remember, and perspectives to share. 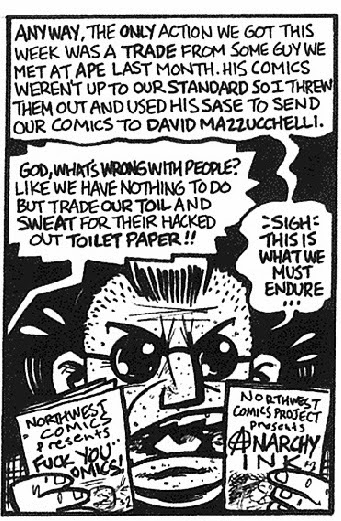 It can sometimes be a long time to wait for something specifically worthwhile, but that's part of the deal. It can take time for a proper critical consensus to form, once the work is divorced from the hype and ephemera that surround the initial release. It can take time for works to be discovered by just the right reader. And it can take time before genius is really recognised.

This isn't just confined to comics – it always took at least a decade before Stanley Kubrick's films became undisputed masterpieces – but comics are so fixated on the now and near future, and nobody cares about last week's shipment, even though some meaty works really do take some time to digest.

I only just read Chris Ware's excellent Building Stories comic box a couple of weeks ago, and I'm still looking for a really comprehensive analysis. There was plenty said about it when it first came out, but there hasn't been the really deep commentary that the book deserves since then.

(It certainly won't be coming from me, when I talk about the comic next week, because I'm far, far more interested in How It Makes Me Feels, rather than What Does It All Mean.)

But I also have total faith that this critique that I'm craving will appear, sooner or later. It might already be out there, and I just haven't found it yet. It might actually be the work of several different writers working on separate pieces, rather than one complete analysis. All I know for sure is that one day I'll stumble across it, and gain a richer appreciation for Ware's original work. 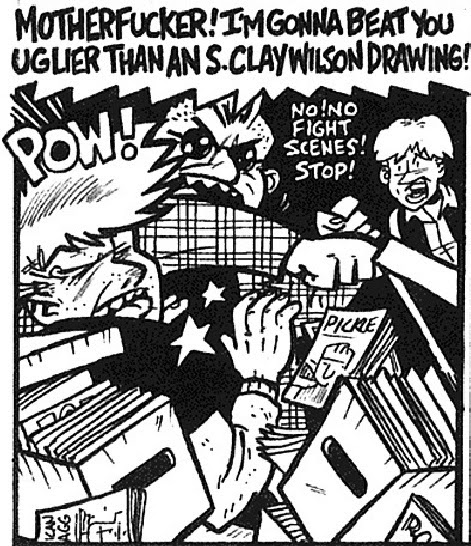 I've made the same argument before about the state of comics journalism, that there is more good stuff out there than anybody will admit to, and other viewpoints are equally valid, but I'm gorging on great critique, even if it takes some time and effort.

Putting time and effort into something might be incredibly unfashionable in the lazy, lazy 21st century, where we all demand instant gratification, but there is always a direct correlation between work and reward. It's just worth it.

Moaning about the state of comics criticism is easy, but it's not nearly as much fun as putting in the effort to find the good stuff.