I came to Chris Ware's comics at a very miserable time in my life. I first read Jimmy Corrigan around the turn of the century – during a period where I had no job, no girl, no car and no prospects.

And then I started reading Ware's precisely melancholic comics, and they actually made me feel better. Because they were a lot funnier than I expected, as all those grim silences between lost characters end up becoming more than a little absurd. And they also helped because they gave me the kick up the arse I needed to get out of a rut. 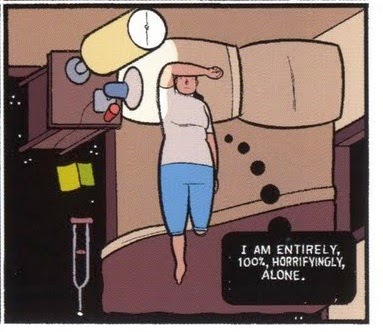 I finally got the chance to read Building Stories in the past few weeks, when pal Nik gave me the box set to look after while he moved house, (this worked out well for him, as it’s a significantly sized object that he doesn’t have to worry about). It costs well over a hundred bucks in this part of the world, and as rewarding as Ware's comics always are, that was still just a bit too much for any comic story.

But even though it took almost two years to get to it, I was delighted to finally get my hands on the comics, and even more delighted that Ware's stories are as precise and sombre as ever.

It is still a bit intimidating when the box is first opened, and there are a number of dense comics of various sizes within, and it's especially daunting when there are no clear indications of what order they would even be read in. But Building Stories is a surprisingly easy and engaging read, and that lack of order turned out to be a major bonus.

And there is still that same sensation I felt, of connection with miserable characters, and the weird, miserable shame of a possible life. 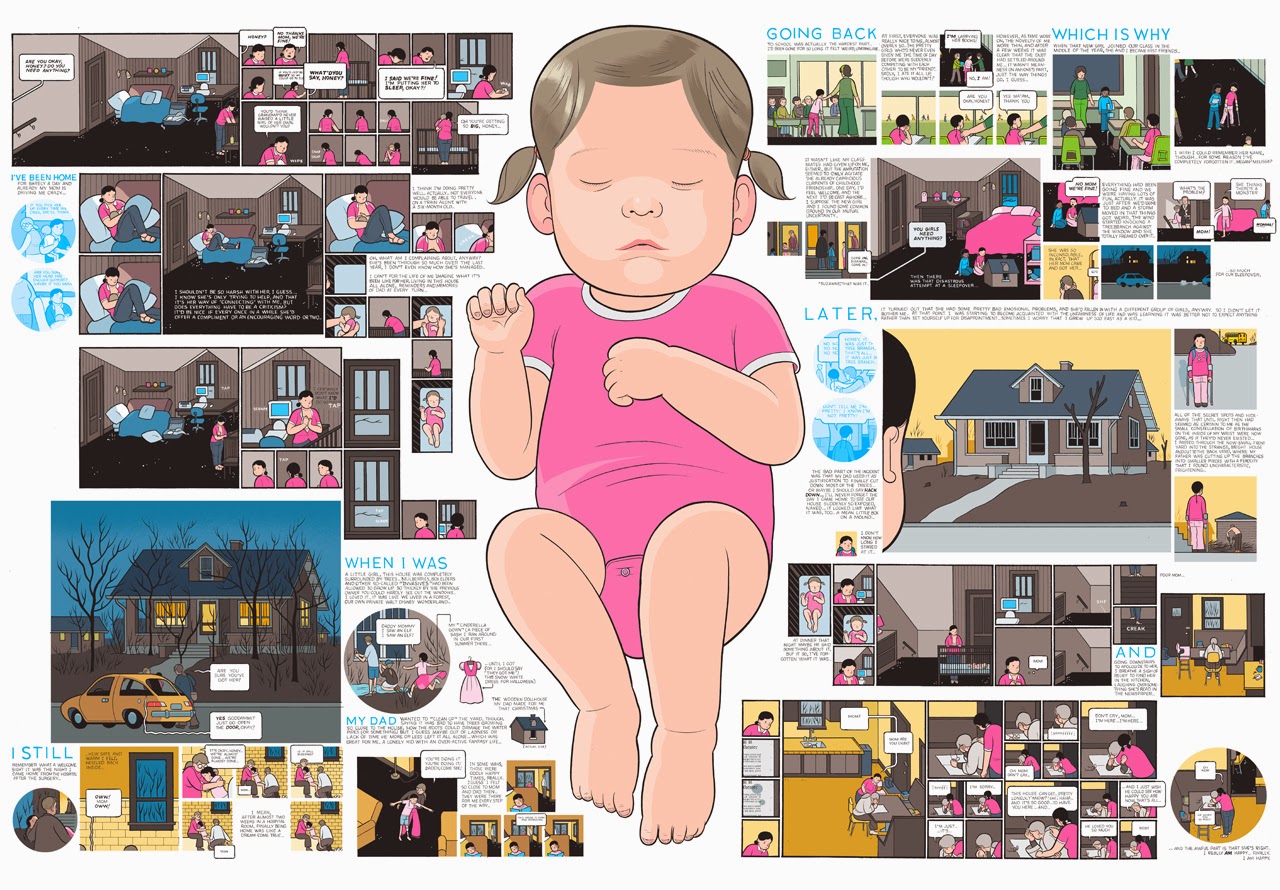 The Building Stories comics do look complicated, but are really incredibly easy things to get through. It can be genuinely discouraging to look at these sprawling, dense pages, especially if you’re not perfectly in the mood for some fictional misery.

But Ware knows what he is doing, and each page is as easy to follow as a decent Donald Duck comic. There is a consistent narrative flow, and absolute logic to the packed pages. Any time it gets a bit too complicated, Ware throws in a helpful arrow between panels to show you where you should be going.

And it also helps that Ware’s art is so consistent and exact – every character might share that same worried brow, but you could never mistake one character for another, even as they age decades between the panels. The characters’ presence in the physical architecture of the story is always absolutely distinct, and there is never any confusion about where they are in life, or in those cramped, empty rooms of dying buildings. 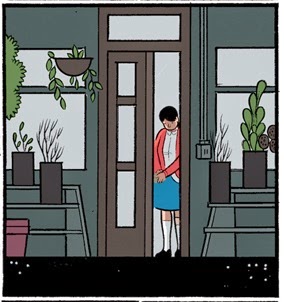 Some of the larger pages of Building Stories have up to a dozen different stories happening on the same spread, but they're easy to follow, and it often doesn't matter which ones the reader tackles first, as the benefits of non-linear storytelling kick in. It's all the same story, no matter what order it's in.

And that extends to the whole package – the Building Stories box comes with more than a dozen separate books and pieces, and there is a definite order to them, as the few main characters grow old and change and move on, but there isn't an absolute need to follow that line. It’s just as rewarding to dip in and out of these lives, especially when the stories are separated by a lifetime of years.

In fact, it's arguably fore learning of the events that led to that fate.

Reading the comics in this way, along with Ware's extraordinarily pleasant cartooning style and the fact that some of his main characters are anthropomorphic bees, makes them a genuinely entertaining read.

But they are still miserable stories about miserable people, and this misery is the thing that is most often picked up by most people talking about the comic.

It's a different kind of misery in this latest work – the adolescent fears, worries and concerns of his earlier work grow into middle-aged angst, with more than one character feeling stifled by the rigour and exhaustion of a normal life in the suburbs. The details have changed, but the fear remains. 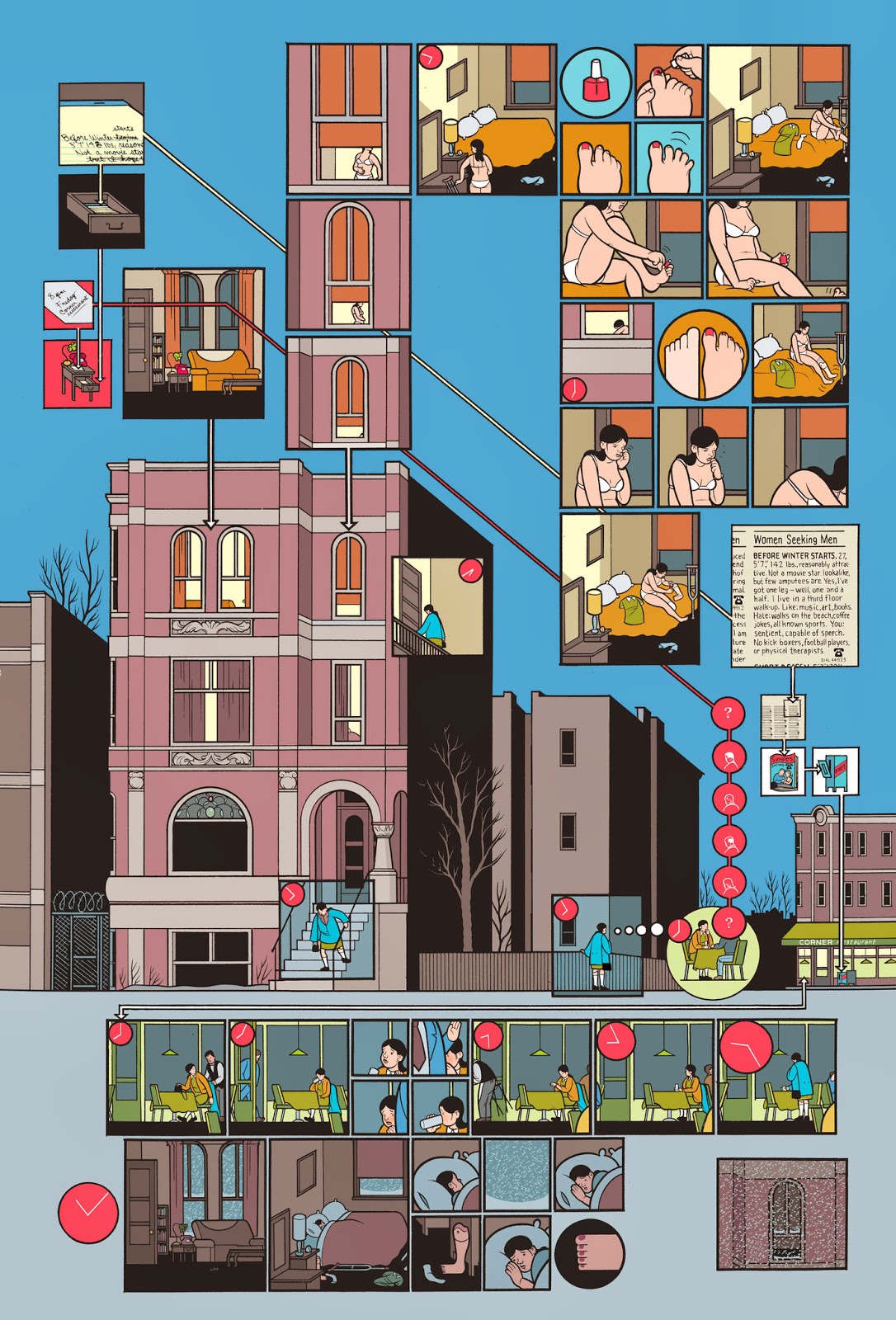 My own fears and worries have matured along with them. Jimmy Corrigan was the story of a reasonably young man still trying to find his place in the world, Building Stories is more about the funk of middle-aged drudgery, and they’re both recognisable.

And they're something to avoid. When I first read Jimmy Corrigan, I recognised more than I would like in the main character, and I knew how easy it would be to turn out like that – a shy and stumbling lost soul, too terrified to make a proper human connection, in case it hurt too much.

And I desperately wanted to avoid that fate. I have a deep fear of change, of anything that upsets the current status quo, but I also crave it like nothing else. It might be painful, and hard work, but avoiding the road to Corriganville was something worth working for. 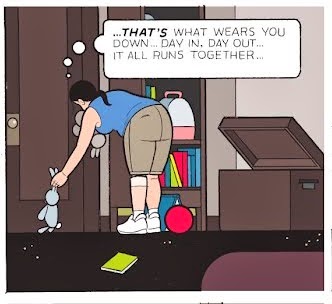 These days, I identify less with Ware's characters than I did when I first meet them, and even if I can recognise parts of me in them, I ain't no Jimmy Corrigan.

But even with this lack of identification, Ware's comics are still razor sharp, super smart and utterly moving. It can be hard to open them for the first time, especially when everything looks so incredibly complicated and downright miserable, but there are always simple joys to be found.
Posted by Bob Temuka at 10:52 PM

Slightly ashamed to admit that I've had this sitting aside for over a year. There's something daunting about the large physical presence of the box set. And how/where do you start? Can it be picked up from any starting point and read through in any combination? First time caller, long time listener

Just go for it, Alfie. They're not as hard as they look. When I got through them, I read them in the order of smallest to biggest, mainly because I was terrified of losing one of the little pieces.

There is a definite order, some comics move seamlessly into others, but there are also hidden rewards in going back and forth....

Ashamed to admit I read most of the box and then got distracted and never finished it... Ware's work blew me away the first time I saw it, the Chicago Exposition issue of Jimmy Corrigan, but I was left cold by Rusty Brown which seemed to mine the same emotional territory. Bought Building Stories because I loved the concept, the format, the production values and it was cheap over here, but found that again it dwelled on fear of contact, minor humiliations, the endlessness of even temporary loneliness. He's an incredible artist restating the same themes, and either because they're not my thing or because of exhaustion I find his work, to paraphrase I think Joe Orton, hard to put down but increasingly easy not to pick up.

I'm paraphrasing heavily here but believe Alan Moore said of Ware's work 'you're born, life is hard, then you die, so what, everyone knows that'. That clinical focus on the trudge and drudge of life can be off-putting without offering a handful of magic dust or 'something more' that other great writers bring in to their work