The wit and wisdom of Mr Grant Morrison, (at his most obnoxious)

I have a fierce addiction to old magazines about comics from the eighties and nineties. In the past couple of months, I've bought up old issues of Tripwire, Amazing Heroes and ARK, I've burned through more than a dozen old Comic Journals, and I even pick up the odd old Wizard, because it pleasantly reminds me of a time when I actually gave a shit about Green Lantern.

I dig the old news sections in these magazines, especially when it's about projects that never happened. I love the critical analysis, which is still charming, even though it now looks incredibly clumsy. And, most of all, I adore the old interviews, because they are often with people who aren't with us any more, and because the interview subjects aren't afraid to say what they think.

The internet has almost killed off the interesting interview. Most new efforts are focused on shilling for a new product, and almost all creators are so net-savvy that they won't say anything too controversial, because it can easily get taken out of context and twisted into other people's agendas. And they can't slag anybody off, because they might end up working for them again in this tiny industry.

There are still some good interviews like that, including one from Paul Jenkins recently, but that was still pretty bloody mild, compared to the blood and thunder seen in the heyday of print magazines.

The obnoxiousness is another thing that gets toned down a lot in modern interviews, and sometimes I stumble across an old interview in an old magazine which attempts to crank the obnoxious attitudes all the way up to eleven. Like the interview with Grant Morrison I just read in issue eight of Comic World, the 'enthusiasts magazine for buyers, sellers & collectors' from the UK. 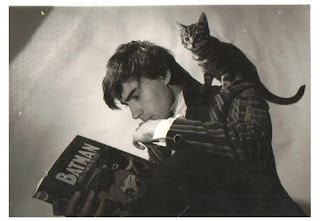 It's dated October 1992, and it features an interview with Morrison where he is spectacularly obnoxious. This is post-Animal Man, pre-JLA Morrison, just before he started work on the Invisibles. So the interview with Martin Conaghan comes right in the middle of Morrison's working-class art-terrorist phase, and he's playing it up for the cameras in this magazine piece.

It's all artifice, and that's where all the fun is. It's hard to take seriously when Morrison is introduced screaming his way through an 'elaborate Tae Kwon Do fighting pattern' and hanging out with a tall Nordic man dressed in a leopardskin thong and a pair of wrestling boots, who Morrison got from an agency.

But it's still full of nasty and vile little quotes, as Morrison plays up his enfant terrible persona, the sort of interview creators just don't give anymore, because they'd be endlessly retweeted and reposted, and any major point that Morrison was making about the superficiality of hedonism gets lost in the white noise.

Unfortunately for Morrison, anybody could still drag up his old persona and stand around and laugh at it. That's what happens when you go on record, and while I feel a bit sorry for Morrison for dredging up embarrassing stuff best left forgotten, it's just too fuckin' funny not to share some of it. 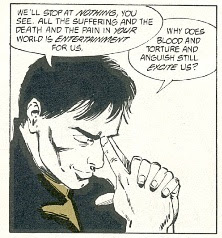 Morrison on adult graphic novels: 'Nobody wants to read them. The only comics that adults want to read are things like Viz. I've been trying to warn them for years, but my colleagues thought I was the cynical voice of doom – and now look what's happened to the 'adult comic revolution' – A Small Killing for 50p in the bargain bin at WH Smith. No-one gives a toss.”

Morrison on comics criticism: “As far as I can make out, comic critics are just a bunch of washouts trying to exercise the final shreds of what feels like power in their tiny worlds. The failing effort of the hobby element in comics to raise its reedy voice in praise of sameness, tedium and 'solid', 'craftmanslike' work.”

More Morrison on critics: “Pricks! They're so easily manipulated, It's like pigs at a trough. Give 'em exactly what they're familiar with and they slurp it up every time. I'm looking forward to their pathetic attempts to criticise me now that I've got them sussed.”

Morrison on modesty: “It looks like I've produced one of the finest and most eclectic bodies of work in this, or any other country.”

Morrison on the comics medium: “Look at someone like Rob Liefeld; he sits on his arse all day, churning out a few pages of barely literate, totally incompetent drivel – and he's raking in millions. Comics is a medium populated and consumed by morons.”

Morrison on Alan Moore: “Alan Moore is the King of Comics and don't you forget it. Even when he writes short stories they're just comics without pictures. The man's committed to the comics medium and it's a good thing we've got a trailblazer like him to look up to.”

Morrison on the possibility of someone else doing a Zenith comic: 'If anybody tries it, I'll kick their head right in – and that's a promise” 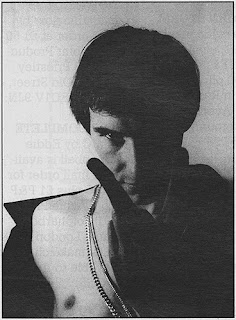 There's more, some of it which gets quite personal, as he sniffs at Tom Veitch's 'ultimately amateurish' take on Animal Man, or the fact that John Wagner didn't do anything seriously until he saw all the young punks doing it (particularly ironic, since Judge Dredd remains the one comic character that Morrison just flat-out can't do properly), and some bitching about Pat Mills' plotting.

And like all good all interviews, there are little pieces of interesting information I hadn't heard before – tiny bits of new trivia, like how Sebastian O actually started as a Janus Stark comic, or that foolish people once slagged off Brendan McCarthy, or that Morrison was working on a Whip idea 15 years before Seven Soldiers.

And it's all an act – the art terrorist who is willing to bugger any sacred icon and look fabulous while doing it. It's just a phase. It's just another primitive fiction suit.

(Besides, as obnoxious as Morrison gets, I largely agree with him on most of the points he makes, even if I'm too polite to say anything about it.)

Comic creators use Twitter these days to craft this kind of persona, but often trip up and inadvertently reveal the odd real, unsettling truth. But tweets are so transient, and unless they get a lot of attention – both good and bad – they're soon forgotten. Going down on record in print as a total douche takes a bit more guts, because you never know when it might be dug up again in 21 years time by some arsehole with a blog.
Posted by Bob Temuka at 7:02 PM

Or even worse, scanned and put up for everybody to see. Bloggers = Arseholes.