Comic masters and baiters: The Judas Coin and Batman: Odyssey

While most of the new 52 line remains utterly mediocre and lacking in any kind of style, DC still has the pleasing habit of getting older superstar artists of days-gone-by to do something new for them, usually involving some kind of prestigious presentation, with almost zero editorial influence or oversight.

These artists – who have been influencing the look of modern action comics for decades – often deliver works that drive nerds mental, with a callous disregard for current continuity or the “right” way to do a character, but this is usually the most attractive thing about the work: it doesn't look like everything else.

The ultimate example of this is still Frank Miller's DK2, which polarised readers to an incredible degree – some loved it (that's me), and many hated it. Either way, it still sold a shit-ton of copies, which inspired the company to pursue other fading greats, getting them to return to DC and do whatever the hell they want.

Sometimes this works rather well, and you end up with something worthwhile, like Water Simonson's terrific Judas Coin book. And sometimes, you get Batman: Odyssey 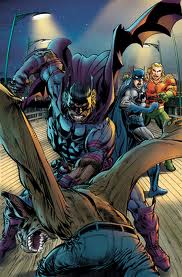 Neal Adams' Batman: Odyssey really is as nuts as everybody says it is. It has a demented and hysterical tone, a bizarre and complicated plot, and worrying digressions into dodgy philosophy. The few examples of this craziness I saw on the internet quickly convinced me I didn't need to read that comic straight away, but I eagerly nabbed it when it showed up in the library, because I wanted to see if it was really as mental as everybody says it is. It is, and they're right.

Adams was an incalculably large influence on the look of superhero comics, bringing a flowing grace to capes and boots that is still being imitated, years and years later.  His Batman comics from the late sixties and early seventies are still remarkably powerful, (and still fairly profitable, as well), so you can't blame DC for being so willing to let Adams go crazy with a new Bat-project for 13 new issues.

Which is exactly what he did, with this mad rambling story of ninja bollocks and evolved dinosaur versions of Batman and Robin with fetching blond hair. It's so dense with weird twists and extreme overeactions, that it can be hard for the modern reader to even get through. 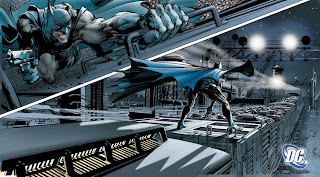 The strange thing is that I found it incredibly readable, once I got into it, and I did read the whole 13-issue collection, which is not something I can say for all the regular-flavour Batman books I got out of the library. It did take me a few weeks to get through it, but I kept picking it up and reading it in 30-page bursts.

That was all I could get through before the ridiculousness got too much, but I would always want to see where the story would go next, because I legitimately had no idea where Adams was going. And while modern Adams art looks a bit rushed and over-staged, and drenched in that dull and muddy colour palette, it is still occasionally quite effective. Adams still does a mean hands-thrust-out-at-reader, and there is something gloriously goofy about Batman riding a flying dinosaur.

Batman: Odyssey really is one of those so-bad-it's-good books, but it's not just that. The plot unpredictability is really refreshing at a time when every other bloody scriptwriter still think they have to do what Robert McKee says, and it was a singular, idiosyncratic chunk of comics, which I can never help sneakily admiring. 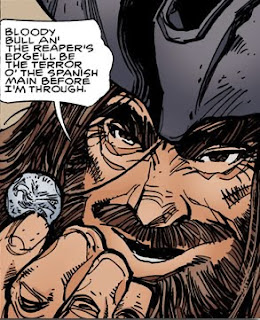 Walter Simonson is another comic great whose influence is everywhere. His work for Marvel in the 1980s was a fantastic blend of strong craftwork and messy chaos, which was a huge influence on the Image artists, (even if they took the mess and left the craft behind).

He's been keeping busy in the past couple of decades, with his art and writing showing up in odd, surprising places, but his most recent big project was back at DC. The Judas Coin is a lot tighter than Batman: Odyssey, but the principle is the same – let the artist do what they do best and leave them to it.

It's about a hundred pages long, with half a dozen short stories, but it's still pretty ambitious – telling the story of one of the silver coins given to Judas for betraying Jesus, and the sad fates of those who come into contact with the cursed currency, over two thousand years of the DC universe.

There are ongoing themes of betrayal and honour amongst the stories, but they also give Simonson the chance to play around with a few different styles, with a few different characters, with some warm contrasts. The only story set in the present day is told in the form of an old newspaper comics page, and features the Batman – the man who never loses – failing to accomplish much when he tangles with Two-Face.

The scope of the story means there is also room for some Bat Lash fun and stories about the Viking Prince, Captain Fear and the Golden Gladiator, who all haven't had stories in years and years. They're all ridiculously entertaining, with monsters and daring deeds and evil scum to be vanquished. The final story, featuring Manhunter 2070, is a fairly old fashioned version of the future, but that's just part of its charm, which works well with Simonson getting even looser with his line, and piling up the storytelling tricks in finest post-post-modern fashion.

The lack of editorial oversight that leads to these kind of works is both a blessing and a curse, and sometimes you really wish somebody had tapped the artist on the shoulder and asked them to have another go with some of the cheese-tastic dialogue, or filled in that gaping plot hole, or taken another go at that pencilling that leg.

But I can't just write them off for this kind of thing, because I have too much affection for comics by artists who are just doing whatever the hell they feel like. They might go to places I'm not really that interested in, but at least they're going somewhere.
Posted by Bob Temuka at 7:15 PM