A double dose of Vertigo: Fables and American Vampire

Vertigo managed to get some attention last week, with the announcement of half a dozen new titles, and it felt like a direct answer to questions over the line's relevance, and whether it still had a place in the modern comic market.

While the best way to still do that is to put smart and stylish comics, I have to admit that I will only get one of the new titles just announced, and that's the long-planned Sandman comic. Some of the others do sound interesting, and have got some solid creators, but they mainly feel like the sort of thing that 2000ad is already giving me every week. I'll wait to see how they're received, and might catch up with the best of them when they are reprinted in a book format.

I'll be getting the Sandman comic because I have a deep personal affection for the comic, but it might be the only brand new periodical Vertigo comic I get all year, and my inner 18-year-old is appalled by this fact.

But this doesn't mean I've stopped reading Vertigo comics. I just wait a little longer for them.

I've been heading down Vertigo way since before the imprint started, and there haven't been many times when I wasn't getting something regularly in the line. At some points, more than half of my regular comics came via Vertigo (including times when names like Ennis, Morrison, Milligan and Ellis were all doing fine work at the same time), but I haven't been buying a regular Vertigo comic book since Sweet Tooth ended.

But I'm still living in a Vertigo world – I don't get that monthly fix, but I save it up and just get the collections instead.

And while I just finished getting the trade paperbacks of Scalped and will soon finish buying the books that are reprinted Milligan's lovely take on Hellblazer, there are still two other series that I always buy in trade form, and look forward to each new book: Fables and American Vampire.

(I'm putting off getting the last Hellblazer book. I took a look at the Constantine comic they replaced it with, and it was just so awful it made me want to cry.) 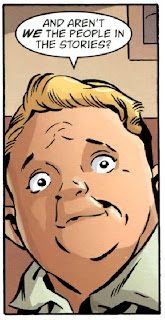 I was singing the praises of Fables here in the tearoom just recently, but I also just read three new books in the series within the past few weeks, and enjoyed them all immensely, because they scrape away that fairy tale veneer of the series and its concept, and find the real brutality lurking underneath

Cubs In Toyland, the 18th collection in the series, is another Fables book with a distinctly grim tone of hopelessness and innocence lost. It's not just the infinite tragedy of children dying, it's the despair of being separated from loved ones, in a surrealistic nightmare that never ends.

Meanwhile, Werewolves of the Heartland is the latest unnecessary stand-alone Fables graphic novel, (which isn't actually that much of a criticism, since most of my favourite Fables stories have been thoroughly necessary), and has its own brutality. It's a Bigby Wolf story, and while Bigby has, through no fault of his own, become a decent person, he is still a primal force of nature, immensely powerful and utterly unmerciful. His impact on normal people can be devastating, and this story sees him deal with the consequences of his own boredom during World War 2 – decades on, people are still dying because of his actions.

It's bluntly portrayed when two people tainted with the wolf curse battle across a forest, and destroy the home and lives of a normal old couple, or when it's implied that thousands upon thousands of people have died to keep a werewolf town secret.

And things don't get any better in Snow White, the latest Fables storyline, which has the death of yet another main character, (and while I haven't even read this storyline properly, just seen the last two issues in it, his return is more obvious that usual). All in all, it's been a dark year in the Fables comics.

Fortunately, it's never a slog, and there is plenty of tragedy, but also some tenderness, and some farce, and some compassion, and some terrific action, (with the art team, led by Mark Buckingham, doing some beautiful work). The Fables characters might come from a storybook, but their reactions to these devastating events are all too human, and makes Fable still incredibly enjoyable, 18 books into the series. 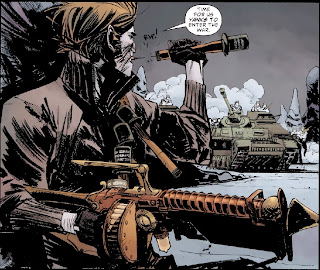 The basic idea behind Fables, of all these storybook characters impacting on the real world, has been ripped off in the past few years with varying degrees of success. But the idea behind American Vampire could be none more Vertigo, which isn't really a good thing.

A comic that uses America in the 20th century as a great big metaphor for everything, with vampires. The whole idea sounded so tediously predictable – variations on themes Vertigo had mined a dozen times before - that I didn't even bother reading any of the comic until the books showed up at the local library, and I discovered that it was a grossly entertaining read.

It gets a lot of charm out of Rafael Albuqueque's churning art, which is equally suitable for moments of quiet grief, and moments when the vampires vamp the fuck out.

The plot also rockets along as it winds its way through the decades, filling in with the odd flashback, but always moving onward, never sticking with any status quo for too long. Combined with some deft characterisation – everybody is a monster to some degree, and sometimes the monsters have the most honour of anybody – and it's easy to overlook the hoary old sub-plots (vampire politics are never, ever, interesting, although Snyder does do something pretty fun with Dracula).

By volume five - which appears to be the last decent chunk of American Vampire for a while as Scott Snyder concentrates on making a Jim Lee Superman story interesting – there has been a century of bloody entertaining stories, erasing those first doubts of a tired premise. 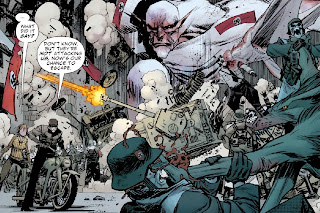 Snyder has, of course, also been doing The Wake with the delightful Sean Murphy, and it seems to be pretty popular too, and will almost certainly be another book to collect, somewhere down the line.

Vertigo's place in the comic market is a lot more blurry than it used to be, with a number of companies, including Image, producing the same kind of thing with the same kind of creative conditions. But as long as Vertigo keeps publishing smart, stylish comics like Fables and American Vampire, I'll keep reading 'em.
Posted by Bob Temuka at 10:26 PM