A cos worth fighting for

The biggest comic convention in the world happened over the past weekend, but like most of you, I wasn't there. I've never been to San Diego, and I'm unlikely to go in the near future, mainly because I live exactly one Pacific Ocean away. If I went down to the local beach and squinted, I might have been able to see the Marvel booth far, far off in the distance, but it's not quite the same.

But while I can't replicate my main reason for going to conventions – buying up cheap comics – a lot of the good stuff that comes out of Comic-Con is still easily available. Any new news is instantly on the internet, and interesting panels are quickly covered, and soon analysed. There are glimpses of new projects, and some unexpected candour among the shilling.

And I love it. I love Comic-Con time, even if it always makes me feel insanely jealous that some people get to read the new Love and Rockets a whole damn month before the rest of us. I love hearing about all the new comics that I'll want to read, and I love the panel coverage that looks behind the scenes of this crazy medium, (I can take or leave the panels that are purely publicity driven). And I love all the movie crap too, even if a Comic-Con rave session is really not to be trusted.

And I love seeing photos of all the crazy costumes that the crazy kids come up with. 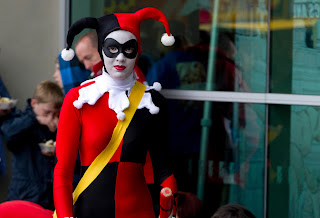 As long as there have been conventions, there have been people dressing up as their favourite characters. Even the earliest real comic conventions, which drew several hundred people to some hotel ballroom in a washed-out 1970s, had those dudes in Spock ears, and that one guy who always went to extraordinary lengths to look like Gandalf The Grey.

Those people are still there, year after year, but the whole cos-playing thing has really taken off in the past decade. They're no longer rare exceptions among the crowd – they're a significant minority, who get louder and louder every year.

It's a hobby that attracts a lot of young blood into geek culture, and one that women enjoy as much as men (if not more). They add colour and volume to any convention, and all this seems to fiercely piss off some nerds, but screw those guys, because these costumes are often incredibly awesome. 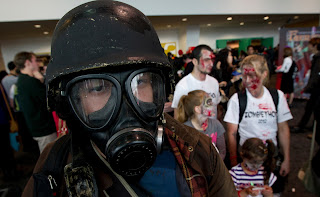 I'm hugely impressed by some of the technical skills on display on modern convention floors - some of the in-mask animatronics are astonishing (and are something that would have had the 1980s Doctor Who techincal department creaming in the spats), and new technologies in fabrics and latex produce some incredibly nice costumes.

I am getting to the age where I feel like a real pervert for staring at young women in extraordinary outfits, but I really am impressed by their costumes, and they are there to be looked at and appreciated, and I surely appreciate their efforts.

But I'm just as fond of the fat balding bloke who just covered himself in green paint and turned into the Incredible Sulk, or the kid with the cardboard sword and helmet. Because the thing I like most about cosplayers is that they're totally not afraid to wear their heart on their sleeves.

They don't care that they're going to be stared out by genuine pervs, or that they're being judged, or that people are laughing and sneering at them. There is too much enthusiasm to bother with that crap and you can't judge people for their enthusiasms, if they do no real harm.

Last weekend we went to see the Lone Ranger film, and there were two late middle-aged people there who had honestly dressed up as cowboys for the film screening. Teenagers openly laughed at them, and they genuinely didn't give a fuck, and had a great time watching the film, and that was probably the cutest fucking thing I seen all week.

There is more safety in numbers at something like Comic-Con, because there are so many of them, but they still stand out in the crowd, and they’re not afraid to show their love for some comic, or movie, or anime, or TV show, or whatever. And I’m all about the love. 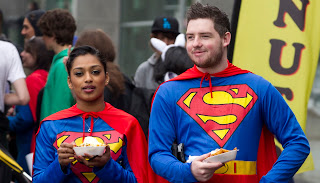 But not everybody feels the same way I do about it, and I often see grumbling and moaning about cosplayers, much of which is hopelessly misplaced.

The annoyance is understandable when people with huge costume pieces do take up space on a crowded convention floor, (made even worse by others trying to get photos of them). But that’s not really the cosplayer’s fault, more an organisational issue, and if you start banning people for taking up space, there are plenty of other candidates, such as people with big backpacks, or groups of friends who stop dead in the middle of a choke point, and if we got rid of everybody who got in the way, there wouldn’t be anybody left. Which would be a fairly rubbish convention experience.

Another annoyance directed at cosplaying also has a tiny smidgen of merit, and that’s when mainstream media covering these events head straight for the people in the weird outfits. This leads to unrealistic portrayals of all comic readers as fanatical fans, when the vast, vast majority of readers are perfectly happy in normal clothes, and don’t let silly things overwhelm their lives. But again, that’s not the cosplayer’s fault, it’s the clichéd media portrayal of them. (And besides, it’s really only an issue for those who get way too worked up about how the regular world sees the comic medium, which is really not worth worrying about.)

These are relatively minor annoyances, easily forgiven and forgotten, but other complaints have that fetid reek of entitlement about them, with a hint of the loathsome snd ignorant idea of the 'fake geek girl'. Some moan that cosplayers “aren’t true fans” or are only interested in getting attention without actually liking the thing they’re impersonating, but those complaints are pitiful. After all, we all hate it when our favourite things become succesful, but that doesn't mean the new fans don't love it as much as you did, and just because the girl in the Spider-Woman costume wasn’t even born when you first fell in love with Jessica Drew doesn’t mean she isn’t as passionate about it as you are. 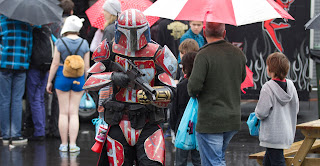 I've never, ever felt the urge to put on a costume myself - a cool tee-shirt is enough to identify me as one of the nerd herd. But I do have a tiny bit of admiration for people who do go to the effort of putting on a costume.

You have to appreciate the effort, the imagination, and the sheer technical skill in creating these costumes, and they come in such an incredible variety. And you have to admire the guts to wear it, and show the world your love.

(There are some terrific examples of the costume at this year's Comic-Con here. My favourite is the Aquaman dude.)
Posted by Bob Temuka at 12:57 PM