There is a guy at my work who does these great little cartoons to let off steam, but we’ll never be friends, because he doesn’t like Batman.

Well, of course he likes Batman – everybody likes Batman. But he doesn’t think Batman’s a good superhero, or even a superhero at all, because he doesn’t actually have any powers.

He said this to my face nearly a year ago, and I’m still silently fuming about the wrongness of this point. And I’m not just saying that because, when it comes down to it, Batman is my favourite superhero of all time, I’m saying it because it’s just plain wrong. 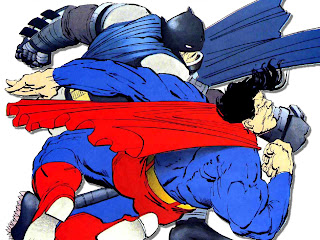 It’s not the first time I’ve encountered this attitude, but it always baffles me a bit. You can have a different favourite superhero – even Drax The Destroyer is somebody’s favourite hero – but to not even acknowledge Batman as a superhero is a sin.

I mean, if you’re looking for superpowers as a criteria, Batman is the fittest man on the planet and possesses a fierce intelligence, along with the strongest willpower in the universe. That’s pretty fuckin’ super.

But really, the only way to work out who is the greater superhero is in the usual superhero way - imagining who they could beat in a fight. So we’re going straight to the top, because if Batman could beat the greatest superhero of them all, he could beat anybody.

And everybody in comics – from indie kids to jaded farts – knows Superman is the greatest. He’s the first, and the most iconic. There were heroes with strange powers before him, but he was the first superhero, and set the standard for the rest. Superman is everything that is right with America, and a symbol for fairness, compassion and a firm hand against bullying. He’s the greatest superhero, and Batman will totally take him in a fight any time.

(I’m also doing this because I’ve had to make this argument a dozen times, and now I can just silently point to this post and point out that I Am Right About Everything.) 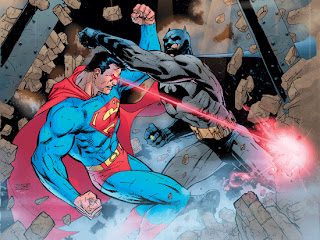 WHY BATMAN WILL ALWAYS, ALWAYS BEAT SUPERMAN
By Bob Temuka
Aged 37 and a half

Make no mistake, Superman could just zap Batman with his supervision from space, leaving a bat-shaped smear on a Gotham alleyway. In sheer power, Superman always wins. He could crash the moon into Earth if he wanted, he could break Batman’s bones with the sonic wave from an armpit fart.

But Superman doesn’t play that game. The fairness that makes him a genuinely aspirational character means he wouldn’t resort to such scorched earth tactics. Even if he was being mind-controlled by that dick Brainiac, there would be some kind of subconscious protection from this sort of thing.

So even though Superman could just pick Batman up and throw him into deep space before Bats has a chance to think, he wouldn’t do that. He’d try to make it a fair fight, even if he is awesomely more powerful.

Besides, Batman would know if he’d pissed Superman off. Another of his not-quite-superpowers is an unparalleled sense of deduction, and he’d see signs that Superman was gunning for him. Maybe he didn’t reply to his Valentines Card this year (“Dear C. World’s Finest Forever. Love, B.”) or maybe Superman said something at the last Super Friends reunion, but nobody noticed because Jayna got drunk again and kept taking her top off.

Batman would know. And he would be taking precautions against a surprise super-attack, and he certainly wouldn’t be wandering around in th open, waiting for a laser from heaven to reduce him to ashes. 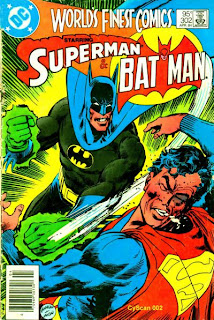 So no matter what, Batman would know it was on, and this is why he always wins – he can plan for anything.

This obsession with outthinking an opponent before the target even knows they’re an enemy has been used against Batman (most recently in the JLA: Doom cartoon film adaption of a Mark Waid story), but it also works. Batman always wins, because he’s always thinking ten steps ahead of anybody else.

So when Superman comes for Batman, you just know that Batman has a Kryptonite shank that he’s going to embed in Superman’s kidneys, or some kind of red sun generator that makes Superman as powerful as a slightly perturbed girl guide. 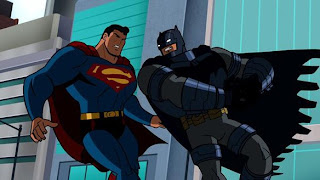 I’m certainly not the first to point out this fact, and there have been plenty of examples of the two heroes having a throw-down, dating all the way back to their earliest adventures.

But there’s actually never any clear winner when the two clash, because DC can never afford to piss off their Bat-fans, or their Super-fans, or anybody. You do get some sort of result in things like Elseworlds books, although the defeat of Batman in something like Mark Millar’s Red Son is weirdly ambiguous, suggesting that the Bat In A Hat got what he wanted all along.

There is also a fairly definitive battle in The Dark Knight Returns, but again, it’s unclear who really wins. Superman is the last guy standing, or is he just playing his part in some larger plan?

In fact, the Dark Knight Returns is a perfect example of Batman’s winning-by-planning. At the end, old Bruce realises he can’t beat still-powerful Clark, so fakes his own death to try something new. He tears it up and starts again, and even though Superman knows he’s been played in the final pages, he lets Batman have his victory. 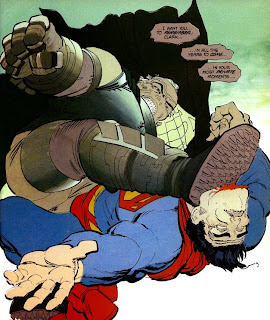 It feels good to get that out of my system, and I only feel a little foolish about the geekiness of it all, and will undoubtedly feel a bit more justified the next time I get into one of these stupid arguments.

Life is full of these stupid little arguments, and while it’s always fun to get into a good debate, some things - like the fact that Batman will always beat Superman - are irrefutable.
Posted by Bob Temuka at 9:55 PM

Never believed it. Superman would fry him with his heat vision, and that's that, and the rest is just fanboy mentality gone mad.

Saw this on cracked: http://www.cracked.com/blog/5-reasons-batman-always-wins/

Quote: "What we perceive as a defeat is just Batman reverting to a less preferable form of victory. So whether he gets crippled or dies, you can be sure it's just the Dark Knight's way of getting the upper hand."

Think it has some relevance here?