We're not savages here, you know


One of the absolutely dorkiest things about growing up in New Zealand is that you always get a little bit excited every time you see the country mentioned in a movie or novel or comic book produced somewhere else in the world. We're such a tiny and insignificant nation, right down here at the arse of the globe, and we're actually quite touched when it feels like anybody is noticing us.

That excitement is there when Tom Cruise mentions getting married at Lake Wanaka in one of the Mission Impossibles, when the islands get wiped out by the moon's explosion in the Legion of Super-Heroes, and when the Ultimate X-Men fought the Brotherhood of Evil Mutants on top of Auckland's Sky Tower. It's there when it's used as an impossible escape hatch for master criminals in films like Point Break and Heat (which is probably 90 percent of the reason why tech-bros keep talking about coming here to sit out the apocalypse).

This tiny excitement doesn't just apply to total fucking nerds like me. When the tiny town of Greymouth on the West Coast was featured as a bit of global set dressing in a recent issue of an Avengers comic, they did an item about it on the national news. Locals were quite excited, it turned out.

Most of these representations – even the one from Mark Millar – are surprisingly accurate, but sometimes you get a reference that is so off-target, you can only assume that the creators have learned everything they know about the country they're depicting from watching the Lord of the Rings movies, because that doesn't look like any part of New Zealand anybody has ever seen.

Like the example seen in these pages from a recent issue of Wildstorm: Michael Cray: 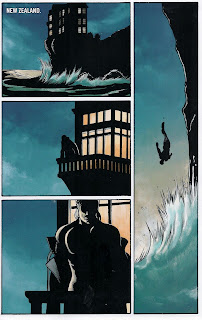 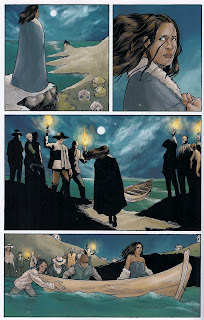 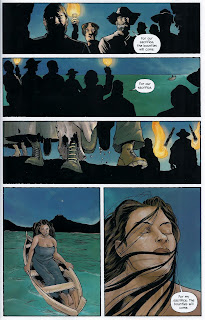 I don't know if it's writer Bryan Hill or one of the artists involved (the credits are a bit vague about who actually drew this part of the story), but somebody thinks this is an accurate depiction of a boring first world nation in the year 2018

The Michael Cray comic  is part of the latest attempt to reboot the Wildstorm universe of characters, and takes place in a shiny modern world. It's a world of jet packs and sinister superhumans and nano technology and interdimensional teleportation and orbital space stations.

Well, it's like that, except in this world's version of New Zealand, where crowds of ragged villagers with flaming torches are still sacrificing virgins to a sea monster before returning to their thatched huts beneath an ancient gothic castle.

This depiction of a modern country as something so medieval goes on like that for an issue or so, and it's extremely jarring for anybody who knows more about New Zealand than they read on its Wikipedia page.

Because New Zealand is the suburbs of the global city, nice and very boring. There are no thatched huts, and definitely no old foreboding castles (the closest thing to a castle in the whole country is Larnach Castle in Dunedin, which is just a very big and quite nice house).

There are some parts of NZ that do get a bit inbred – hello Waimate! - but nothing like this set-up. Even in the remote Chatham Islands, you couldn't get away with feeding your children to the sea without the Ministry of Social Development coming along to have a word about your parenting skills.

It's especially puzzling since the locals claim to have been there since the 1500s, which means they've actually been living in this country for hundreds of years before the first white man even spotted it, but somehow they still don't seem to have the internet hooked up yet.

A bit of artistic license is all good and it is nice to be noticed, but this is so weird it's just laughable, which isn't a great thing for a comic that is taking itself very, very seriously.
Posted by Bob Temuka at 3:44 PM