Carlos Ezquerra wasn't just considered the definitive Judge Dredd artist because he co-created the character and the crazy world around him, it was because he continued to refine his interpretation of Dredd over 40 years of magnificent artwork.

Ezquerra's line would straighten, then soften over the years. Those weird black rectangle outlines he would coat on every edge would come and go, and his computer colouring would go through various regrettable phases before turning into something shiny and textured. Dredd's look is open to vast interpretation, even among the artists who draw him for years and years, but Ezquerra's Dredd is, was and always will be the Ultimate Dredd.

His Dredd always had heft and a bulky presence. He was always the heaviest man on the page, always the focus of attention, as if the entire world revolved around the main character. When he came on to do a Dredd in the past decade, it was always a great big important story in the entire mythology of the strip (with just the occasional one one for a laugh). He was that big a deal.

And Dredd was only a part of a comic career that produced a vast and beautiful body of work. Carlos Ezquerra has left this world, but he leaves so much magnificence behind him. 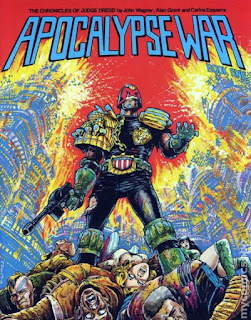 He did westerns and science fiction and both at the same time – Strontium Dog is the best space cowboy ever - and he did a lot of the dopey Tharg The Mighty stories. He did the ABC Warriors in 1979 and 2003, drew some spooky WW2 vampires in Fiends of the Eastern Front, and gave Harry Harrison's Stainless Steel Rat a cocky grin. He covered pregnant gangsters in Al's Baby and political injustice in Third Word War. He did war comics at the start and end of his career, and he drew Bob The Galactic Bum.

His American stuff was limited, usually involving Garth Ennis. It never seemed to really catch on with the US audience, but that always seemed fine with Carlos, who always looked far more comfortable with the dark, ironic humour of the British comics. There were not a lot of superheroes in his art. 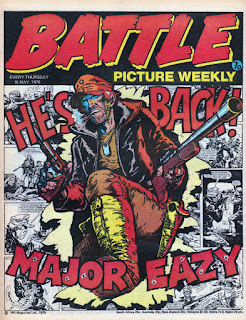 He was such a solid and regular presence in 2000ad over the past 40 years that it was always an unexpected pleasure when he'd try something new. Sometimes he could slip a really experimental use of negative space onto the page, or would mess around with the whole iconography of the judges.

He dived straight into the computer colouring thing, and it didn't work out at first, with his mid-nineties work the only time in his long career that his art actually looked ugly, but he soon toned it down, kept the texture and produced slick, shiny new comics that were gorgeously colourful. 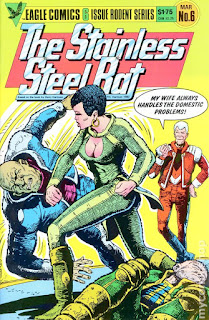 Ezquerra's design work was absolutely iconic and long-lasting. Dredd's uniform shouldn't work, with those ridiculous pads on the knees and elbows, that bright badge on a giant gold chain, those bloody eagles, and that strange helmet with the flowing lines and lightning bolt eyes. But Ezquerra's look, which combined the leather of a motorcycle punk and the garish touches of a fascist police officer, still stands up strong.

Johnny Alpha's outfit is even more outlandish, with that bulbous helmet and shoulder pads that are even more impressive than Dredd's, stretching all the way down the body. But Johnny's look has also aged incredibly well, and looks as tough as ever.

The main character in the Dredd comics isn't the title character, it's the city of Mega City-One itself, and Ezquerra defined that look, several times over. He drew the sky-high tower blocks and tangled roadways of the earliest issues, and then captured the post-Apocalypse War devastation of the ruined city, in all of its griminess and filth.

He could come up with the most outlandish mutants and aliens and high-tech weaponry and vehicles, and while a lot of it didn't make a lot of logical sense, it all looked cool as hell, and that's all that really mattered. 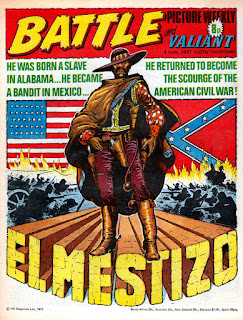 Above all, his passion for the comics was right there on every one of the thousands and thousands of great comic pages he gave this world. They're fizzing with energy and momentum, while rock solid. He could cover a character in a thousand tiny lines to give them a rugged, ragged face, and then get the perfect smirk or grimace with a single line.

He was just a passionate artist, in every sense of the word, and not just on the page. He walked away from Dredd immediately after he created him, pissed off that the first published story wasn't his, and he never compromised or capitulated artistically in any way.

And after abandoning Dredd soon after his creation, then he came back five years later and did more great Dredd comics than any other artist ever. He was there at the battle of Dan Tanna Junction, when the Dead Man walked home and reclaimed his city, when young Rico and Dolman found out what it really meant to be a Judge, and when Chief Judge Sinfield finally went down. No wonder any new Dredd story by the great artist was always so keenly anticipated. 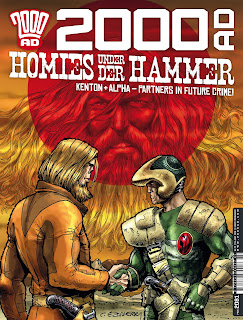 He has always, always been one of my absolute favourite comic artists and I'm genuinely shattered by this loss. He's my Jack Kirby, unloading so much brilliance on me at an incredibly young age that it took years before I really noticed how brilliant he was. The issue of 2000ad that really hooked me for life featured one of his covers, and I actually said 'fuck yeah ' out loud on the street when I got to the last page of Judgment Day

I can't imagine what a 2000ad without new Ezquerra art on a regular basis even looks like, and I'm gutted that we have to find out now. The comic is bigger than any one artist, but Carlos Ezquerra was definitely the biggest of them all.
Posted by Bob Temuka at 7:31 PM