Carlos Ezquerra is still The Man

There have been dozens and dozens of artists who have worked on the Judge Dredd comic over the past 38 years, and the strip is highly unusual in having a number of definitive Dredd artists with wildly varying styles – a Bolland Dredd is just as iconic as a McMahon or Smith or McCarthy or Hairsine Dredd.

But there is still one artist who stands above all as the one, true Dredd artist. Right from the start, he's been the man they call in for the big, epic storylines, and the man they can always rely on to deliver the strange day-to-day life of Mega City One like no other.

Nearly 40 years after he co-created Judge Dredd, Carlos Ezquerra is still The Man. 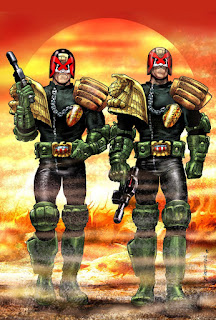 Ezquerra was part of a great wave of Spanish artists who flooded into the British comic market in the 1970s, where they pumped out a huge amount of pages for UK publishers, who were only too happy to take advantage of the cheap labour.

A lot of that art was just average enough to be forgettable, but there was also some incredible talent shining through, and Carlos Ezquerra soon made his mark in the British war comics. Even before they put the credits on the stories, you could never mistake the craggy beauty of an Ezquerra page for anybody else, with the consistency and vitality of a great comic artist. His figure-work could get a little rigid, but his storytelling was silky smooth, and things could get all wonderfully shaky when the bullets started flying.

No wonder they got him in to design Judge Dredd when 2000ad launched in 1977. Even though co-creator John Wagner was after a sleeker, meaner look, Ezquerra piled on improbably design elements, including a big gold badge on the character’s chest and a giant bloody eagle on his shoulder – and it somehow worked. Dredd's design is immortal because it doesn't look like anything in the real world, and remains almost totally unchanged, all these years later.

Just as crucially, he created the actual look of Mega-City One. Originally envisioned as a near future New York, Ezquerra created an awesomely futuristic cityscape that forced the writers to send things another hundred years in the future. No Ezquerra, no Mega-City One, and everybody knows the main character of the Judge Dredd comic is the city itself, and it's all thanks to Carlos. 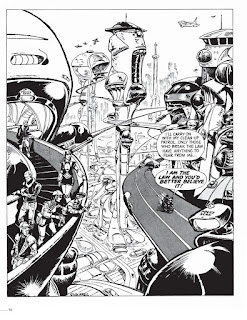 Despite all his work, the first actual published Dredd story didn't feature Ezquerra at all, with Mike McMahon doing his best to emulate the Spanish artist. Ezquerra rightfully took offense and refused to have anything to do with the character for years after that, but eventually softened. And that worked out well for everybody, because he went on to draw some of the greatest Dredd stories ever.

He drew decades of great Dredd comics, and his work was always consistently satisfying. Even with those weird little bumps he'd put around characters' outlines, a Ezquerra Dredd was always a terrific Dredd. He would disappear for years, and then do months of comics in a row, blowing up the city he created several times over, or doing some intimate epic about life in a Sector House. 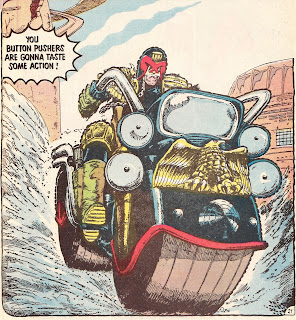 All those years, and his work was always so recognisable. It still evolved - figurework becoming rounder and fuller, while his Dredd just got harder and harder, with a face that never, ever cracks.

Ezquerra was also busy experimenting with colour, trying out new technologies with glee. This saw some unfortunate results in the 1990s, with tones that had all the charm of garish mud, but then he got the hang of it, bringing a new shine to his work that gives it even more heft and weight.

Because that's what Ezquerra does best – he is always the master of bringing power to the comics page. He can could make a man striding down a corridor into a huge dramatic moment, he could craft huge action scenes that were grounded in reality and he captured Dredd's superhuman senses of will, honour and duty like no other. 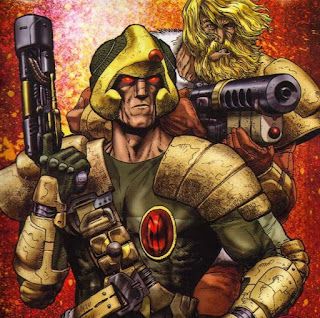 Creating something like Dredd is a great achievement that would be enough for some artists, but Ezquerra also co-created – and still draws - the other great 2000ad character: Johnny Alpha, the Strontium Dog.

Alpha is just as hard as Dredd, but is also more human, even if he is an intergalactic bounty hunter. He will kill any scum that crosses his path, but he's also a good mate, somebody who has your back, somebody you can have  beer with. A noble fighter, who would break the rules to bring justice, and Ezquerra captured it all, with a more haunted action hero.

And somehow, Ezquerra created the most bizarre outfit for Alpha, with a rounded helmet and massive pads, all in bright greens and yellows, and it is just weird enough to be just as eternal as Dredd's outfit. We can see this even now, because Ezquerra is still drawing the ongoing adventures of Johnny Alpha, recently completing the terrific and fun 'Stix Fix' storyline in 2000ad. Nobody does Johnny Alpha better. 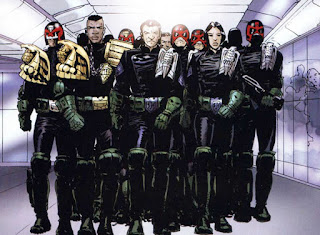 Outside these two big characters, Ezquerra has always been keen to try something new, from the Mafia pregnancy silliness of Al's Baby to the space age shenanigans of the Stainless Steel Rat. He's happily imported the Major Ezy character from his Battle days into Dredd's world with Cursed Earth Koburn, and wasn't afraid to get a bit political with the launch of Third World War, written by Pat Mills, for the Crisis bi-weekly title in the late eighties.

The artist has stuck with writers he explicitly trusts, and rarely does anything for 2000ad that isn't written by John Wagner or Alan Grant, and has also had a lot of fun with Garth Ennis' scripts. There he could do comedy nonsense like the Rifle Brigade, or the odd deeply serious and deeply affecting war story, like the brilliant Condors, a tale of humanity in the Spanish Civil War, which Ezquerra took personally and still ranks as one of the best things he has ever done. 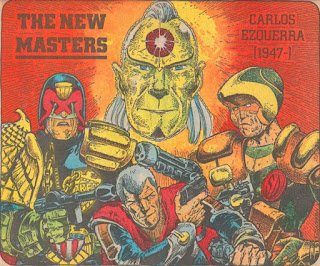 Ezquerra has spent the past few years bouncing between Strontium Dog and Judge Dredd, and even after all this time, and after thousands and thousands of pages of comics, an Ezquerra strip is an absolute delight, and always welcome. He's still massively under-rated, so a recent award for his incredible life-long career was more than overdue.

He suffered a health scare a few years ago, but has vowed to keep working until they put him in the grave with his pen. Hopefully, that day is still some long way off. He's given us thousands of pages of great comics, but we could always use a few more Ezquerra comics.
Posted by Bob Temuka at 7:16 PM

What a lovely appreciation of Ezquerra. I remember puzzling over those bumpy outlines when I read 2000 AD as a kid; they always seemed so weird and unnecessary. Now I look at them and they're just another aspect of Ezquerra's idiosyncratic genius.

I'd put Condors in my top ten comics for its sheer power. The story's a bit overly schematic but the build of the story and the visceral art and colouring make it really compelling stuff and the Spanish Civil War is a fascinating bit of often forgotten history.

Also, fun fact, as someone once pointed out Johnny Alpha is pretty much the only comics 'hero' with dark curly hair!