Love and Rockets: Fuck off with your bullshit, dudes 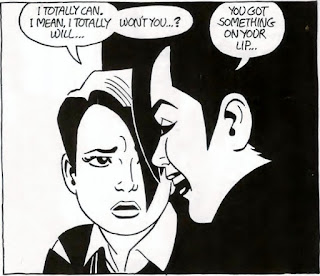 There has never been any room for any toxic masculinity in Love and Rockets. Maggie and Hopey never put up with that shit, and all the biggest swinging dicks of Palomar swung themselves right into the grave or a jail cell.

It's still there, just like it is everywhere in our modern society, but it has never been not tolerated or normalised in Love and Rockets, and it's definitely not being tolerated in the latest issue, in the stories beneath a cover of a beautifully craggy Maggie, scowling at at a world reduced to rubble.

Beto's comics in L&R #5 deal with the issue by getting rid of all the men almost entirely - the women of his stories don't need any masculinity in their lives. His latest chapter vaults over the Bechdel Test in the first page, with a group of women discussing the finer merits of calculus, and the only blokes who appear are well-meaning minions who are really no fucking use at all.

Maggie and Hopey don't have that much luck in Jaime's pages, where he finishes off his 'one crazy night' story that has been running for a couple of years now. Toxic masculinity is literally stalking them in the guise of Eugene, a guy who sounded like an interesting dude to meet at first, only to turn out to be a creepy piece of shit.

Eugene sums it everything you need to know about this kind of behaviour. It's not just harmful and genuinely threatening to two women who are just out to have a good time, it's also dull, plodding and boring. And so fucking dumb - the kind of dumb that doesn't know to run off the flash when you're taking a selfie in the mirror - and loud at it, with dopey homophobic and transphobic insults.

All he has got is his bulk, which he can use to silently intimidate, but he's just a coward who sulks away when called upon it by a larger group of people.

Neither Hopey or Maggie have the energy or inclination to deal with Eugene's crap. They've got enough problems of their own, and are left unloading their deepest regrets and shames, and left sitting with forced smiles in empty rooms.

After all, they know where all that dumb male behaviour leads. In the flashback parts of the story, we see Del Chimney, one of the biggest dickheads of them all, left standing alone and naked at the front door, and about to be crucified on the living-room floor. That path never leads anywhere good.

There are a lot of problems in this world, and we can't blame them all on silly and pointless men - Maggiue and Hopey's troubles with judgemental arseholes don't end when they ditch the dick. But we can pin a lot of them on the wide-reaching effects of toxic masculinity, and it's about time we all tried to do a bit better.

Nobody is helping anything by acting like a boring bully. Even some of us idiotic men - and the creators of the world's best comic - can figure that one out.
Posted by Bob Temuka at 2:17 PM