The Visitor - How & Why He Stayed: A little light in the abyss 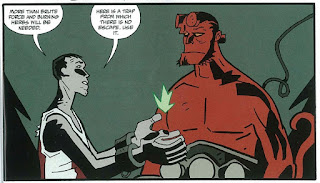 One of the most pleasant things about the small universe built up around Mike Mignola's Hellboy comics is the strong art direction. While many small comic companies are more interested in the high concept than great artwork, the comics put out under Mignola's careful eye feature art that is a vital and integral part of the overall storytelling,creating mood and atmosphere, and conveying fernetic action when called for.

It's an approach that encourages artists to have their own different styles, while still keeping a cohesive overall aesthetic. There is only the vaguest of house styles, somewhere between the heavy weight of Mignola's own line, and the fine detail of later Hellboy artist Duncan Fegredo.

There has definitely been more experimentation with that cohesion in the past couple of years, especially with a number of spin-off mini-series featuring side-characters of this vast and sprawling saga. Some of them are in the capable hands of the reliably excellent Ben Steinbeck, and others look like nothing else published under this imprint. The Visitor: How and Why He Stayed is most certainly one of the latter cases.

Paul Grist has been producing his own great comics for a couple of decades now,  but his simple, elegant and utterly distinctive artwork is still a breath of fresh air into the world of Hellboy. It's more heavily stylised than the usual comic in this universe and just a little bit more brighter and colourful.

It's especially fitting for this particular story, rather than in the ones about the Black Flame or Rasputin, because this isn't really like any other Hellboy story. There are still huge, unfathomable monsters from beyond the veil looking to soak up all our souls, and it does give the backstory to a weird character who made a tantalisingly tiny appearance in a Hellboys comic years and years ago, but this is something else.

Instead, the key relationship at the centre of The Visitor is a quiet love story that stretches over a lifetime. It subverts an obvious expectation of shock horror, when the alien's true form is revealed to his human wife, but she just tells him to stop speaking in alien jibber-jabber, and they get on with their life. It's a comic that says that the beauty beneath the skin, and how that's just as important when it comes to overcoming the darkness all around.

There is still also a melancholic air to it all - a being who just wants to stop the world suffering the same sad fate that his did. Even as the light of the alien's civilization dims in this cold uncaring universe, one of the last survivors continues on, as best he can.

There are still plenty of monsters that need to be punched back into the dark abyss, but it's not as important as losing somebody you love to the ravages of time. And even a dead alien, chained up and slumped against a castle wall, was somebody who loved, and was loved.

Grist's clear and efficient art effortlessly sells this heartbreak in a way other artists would struggle. It might be more cartoonish than other stories in this massive tapestry of a saga, but it's perfectly suited for the delicate touch the story requires. This one isn't set in hell, or in ancient forests, or on some battlefield. The Visitor takes place in the heart.
Posted by Bob Temuka at 8:28 PM