Ganges: What were you thinking? 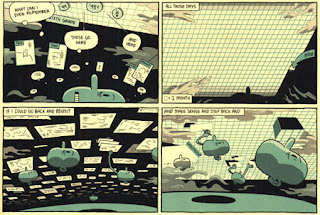 The thought balloon has fallen hopelessly out of fashion in mainstream comic books, which is weird, because they just got filed down at the edges and turned into caption boxes. There's no real difference - square boxes are just so much cooler than fluffy ones. Apparently.

But even with the sharper corners, these glimpses into the inner-most thoughts of a character still always feel a little faked and forced, because nobody really thinks like that. Nobody thinks in clear, concise and grammatically-correct sentences. Human brains just don't work like that.

We're still struggling with what this whole 'consciousness' thing is all about, but there is a cacophony in the mind, as thoughts are created, processed and discarded. When we say words out loud, even if it is the most mundane sentence, there has already been a staggeringly complex process going on in the head to find the right thing to say

We don't think in straightforward sentences - our thoughts go back on themselves, interrupt previous ideas and keep repeating.

Capturing that kind of thought process in comic form is fucking hard, so it's no wonder so many writers default to hard-boiled narration. It's easy to comprehend, and follows a long tradition of first person narratives that dates back to novels from hundreds of years ago.

But some comic creators try to capture a different thought process, and Kevin Huizenga is certainly one of them. His Ganges comics have plenty of straightforward and clear thought balloons and captions, but also aren't afraid to break things down, especially when the main character is bone-tired, or half-asleep, or just wandering through life in an everyday fugue state.

With gorgeously accessible art, his comics are full of stories that drift around lazily, while managing to be stunningly complex on a craft level, with pleasantry universal themes of confusion, alienation and curiosity about the world. But nothing feels quite as familiar as Glenn Ganges tripping over his own thoughts, and losing himself in that strange white noise in his head.

He could be wandering around the streets of his dull suburbia, or lying in bed at night, wondering where the hell all that time goes, but when he doesn't even try to keep his thoughts in order, he could be any of us.

There are a lot of other curious delights in these comics, including some startling twisting of the conventions of a simple story or a brilliant willingness to follow a train of thought all the fucking way, but it's the rambling brain that give it all such an unmistakable taste of truth.
Posted by Bob Temuka at 7:48 PM

Thought balloons always fascinate me, because when I was getting back into comics as a teenager in the 80s, they were utterly out of fashion, thanks mainly to Watchmen and DKR, which shifted their non-spoken dialogue into diary excerpts or just plain captions - and also Elektra: Assassin, with its fragmented single-word panels.

These relatively sophisticated techniques made thought balloons seem a little silly, a vestige of the Bad Old Days, and I remember when I first started to hear about Love & Rockets the old UK fanzine FA ran a review that reprinted a panel from Human Diastrophism with a thought balloon - "Senor Munkres sometimes lets me hide under his bed, so I better not fart!"

I was a little baffled that these adult comic critics were putting up with thought balloons in their #1 modern pick, but luckily for me I quickly got into L&R and escaped the modern superhero trap, and the magic of thought balloons - arguably a far more comic-specific device than speech balloons, which really are just dialogue transcriptions - opened up for me again. But they still jar a little when I catch them in the wrong context, like a Moore issue of Swamp Thing or a Miller Daredevil.

(I had similar problems and feelings at the time towards motion lines in art - the single instance in Watchmen where the Rorschach bounces The Comedian's bloodstained badge off the kitchen worktop makes me wince to this day.)