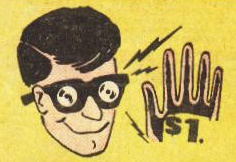 It took me a long, long time to realise that the advertisements in my comic books were lying to me about everything.

Sometimes I wish I was still that ignorant, and that those x-ray spex really did work, and that you really did get a whole army in a footlocker.

Still, once you get past the musty stench of bronze-age comics, the ads are priceless. They almost always get lost for the reprints, cut out to keep the page count down, and certainly not important enough to worry about now.

But some of the biggest thrills I get from old comics is the adverts. Even another crushingly dull 1970s Flash comic has some exciting and propositioning marketing going on inside, and it only took me a couple of decades before I realised they were pretty much all full of shit. 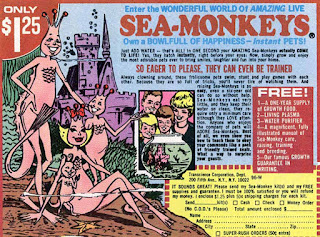 There was always a  history of bullshit to advertisements in comic books. Everybody knew comics were only for dumb kids and mental defectives, so you could get away with selling them any old crap.

The x-ray specs were the biggest tease, with tiny ads offering the possibility of seeing the bones in your hand (the more sordid use of such an ability never occurred to me as a kid, but became painfully obvious as I grew into a dorky adolescent), only to be cheap little plastic and cardboard things that produced a minor optical effect. Which is probably just as well, since we'd probably have a generation of people whose faces were falling off from eye cancer if real x-rays were involved.

It was a history of cheap gags and rip offs, dollar-making machines that seemed like the answer to all my financial woes when I was eight, and produced bitter disappoint when I discovered it was all a sleight of hand trick, or Charles Atlas promising you that could beat up people who kicked sand in your face, with the astounding observation that exercise may make you stronger.

It all reached a high water mark of bullshit with the goddamned sea monkeys, which are just a buch of microscopic bugs. There is still something intriguing about the way these tiny little bastards can sit there in suspended animation, and spring into life when introduced to water, but none of them are wearing any goddamned bows in their hair. 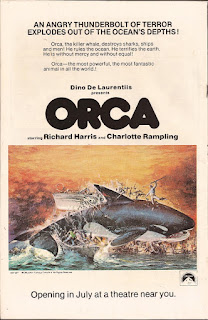 By the 1970s, the biggest rip-offs in advertising lies were the ads for movies like Orca, Meteor and King Kong, where unnaturally talented artists made these cheap and flimsy films look like absolute goddamn epics, with towering monsters and total carnage.

Orca has a giant beast of a killer whale, which looked like it was devastating a whole bloody town, with a mushroom cloud of destruction blowing up behind the monster rips apart a boat, Meteor promised mega-destruction of a kind unparalleled in cinema, and an enormous, angry and thrusting King Kong stands astride the twin towers.

None of these films delivered on the promise of those paintings, but at least we have these great images still sitting on the page, even if they never came close to that kind of grandeur on screen. 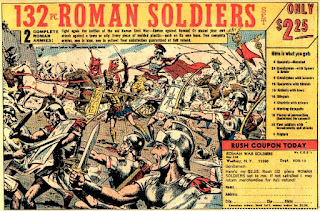 Another great disappointment was the comics that promised armies of toy soldiers, for the low, low price of a couple of bucks.

And the ads were really gorgeous, with massive crowds of Roman Centurions or WW2 marines facing off against a giant enemy, with a list of a huge variety of cavalry, infantry, tanks, planes and artillery. You could stage entire campaigns with the number of toys that these footlockers promised.

I never even thought about actually getting them from overseas, because the US was a world away when I was a kid, and that was a relief when I found out in recent years that they were completely dogshit, and mainly just cardboard cutouts. Even entire armies could be pathetic. 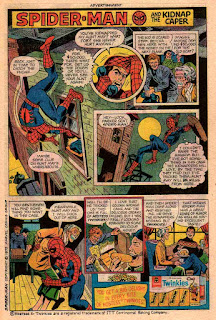 I still held some hope that those bloody Hostess ads, which filled almost every superhero comic, would deliver, but then I had my first ever Twinkie from a store full of imported US junk food, and it was revolting, and I knew there was no way the Penguin would give up riches, freedom or revenge for a rubbery bun full of fake cream, or some gross chocolate muffin.

It was astonishing how fucking many there were of these tiny, one-page morality tales, and some of them were quite well done, but the gastronomical delights they promised didn't actually taste much better than the paper the ads were printed upon. 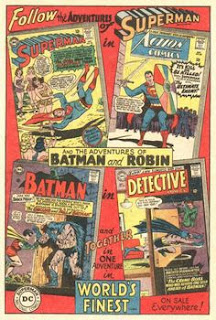 The only ads that ever really delivered were the in-house beauties for other comic books, with tantalising covers for all the other titles DC and Marvel were putting out at the time.

These were the only ones that really delivered, even if I usually had a hell of a time actually finding the comics the publishers were boasting about. Even now, when I snap up cheap, tatty and wonderful old comics, it's the ads for other comics that stand out, and still inspire me to find more.

The ad game has changed a lot since those days, and not always for the better, especially when they interrupt the flow of the comic they're in (I genuinely got confused by Thor's sudden dramatic appearance in a recent Avengers comic, before realising it was just another ad), or when they're lacking even the basic charms of the Hostess one-pagers (all the DC comics I've seen recently have a shitty three-panel thing for Snickers bars that are ugly and clumsy, with the fading stench of a stale Twinkie).

People do have a higher bullshit detector, so the adver-lying has to be more subtle. It remains to be seen if the current crop will ever still match the utter brilliance of Jack Davis' ad for Spalding basketballs. I have no idea if the balls they were advertising were any good, but the way Dr J slams the basket, while Rick Barry stretches out for his '30-footer', is still wonderful.

Sometimes the movies and toys were complete ratshit, but the ads were goddamn gorgeous. 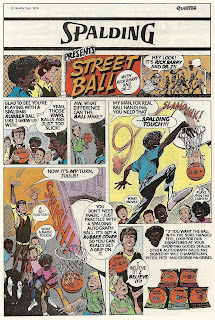