A week of recycling: New Adventures in time and space

I'm a total fucking hypocrite, because after bitching about the hedonistic bullshit of Chrononauts, I have to admit that if I had a time machine, I'd go back 20 years and buy Doctor Who novels. (And probably go back to the sixties with a video recorder and tape those lost episodes.) I almost have all the Missing Adventures now, after a superb score at a Winnipeg bookshop recently, but those last few are going to be a bitch to find.

Doctor Who: On the beach with New Adventures
Originally posted July 8, 2015

Doctor Who started to die a long, slow death when the BBC took it off the air in 1989. Apart from a lamentable crossover with Eastenders, 89 minutes of Paul McGann and the odd comedy sketch, the TV show was off the air and gone from the world.

Russell T Davies and chums sorted all that out 10 years ago, and brought back the Doctor, better and bigger than ever. But for 15 years there, Doctor Who was pretty much dead in mainstream culture.

But it was only his TV adventures that were dead. Something strange and wonderful was happening with the Doctor in a new format, with a new series of novels that took the Doctor into previously unexplored realms of time and space. They were called the New Adventures, and if you get me drunk enough and thinking about girls with short, dark hair, I'll swear they are the best Doctor Who stories ever. 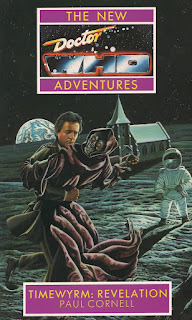 Here's a slice of space and time: Sometime in 1997, I'm on a beach in Dunedin on the arse end of the world, drinking a bloody big bottle of scrumpy cider and reading a book that has the best Wings-based pun ever, and it also features an incredibly smart woman with short dark hair who orders a pint of vodka, and I fall in love with Professor Bernice Summerfield.

Benny is the first proper companion introduced in the Doctor's novel adventures, and she's an absolute delight – snarky and sharp and clever and resourceful and expanding her mind as she falls through the universe. Never mind about running off with the good Doctor, I want to explore the limits of space and time with somebody like Benny.

She's still out there now in 2015, starring in the occasional book or audio adventure, and she's still as beautifully sharp as ever. 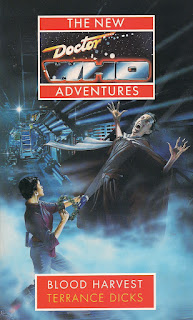 The New Adventures were published by Virgin and were born in the immediate aftermath of the TV show's end, with the Doctor and Ace strolling right out of Survival and into the Timewyrm saga. It only lasted a few years, until the BBC grabbed the rights back in the wake of the McGann movie, and almost all of the Virgin novels have long since fallen out of print.

But they burned brightly, and remain a massive influence on the current generation of Doctor Who writers. Some of the New Adventures novelists went on to write for the series themselves, and some of them peaked a long time ago, but there was such a sudden rush of infectious enthusiasm for what you could do with a Doctor Who story at this time, with a burst of creativity and cleverness. 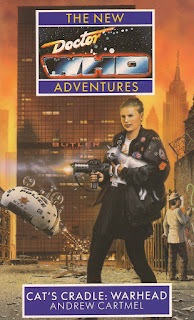 It became a series that got inside the TARDIS crew's heads like nothing before, or since. Unashamedly going for an older audience, the stories were complex and human, with a direct focus on characterisation – lots of hugs and hurt feelings as the Doctor saved the world again.

They could get quite brutal and dark, with massive body counts and destruction on a galactic scale, but they also featured the Doctor going off and getting drunk on his 1000th birthday and singing Happy Birthday to the universe, and they featured strange, lyrical tales set in long-ago English summers.

Paul Cornell set the new standard with Timewyrm: Revelation, and would come back every year or so to raise the bar again, and it was a level of quality that no other TV tie-in novel series came close to touching. There were consistently brilliant books by Cornell, Kate Orman, Lance Parkin, Andy Lane and Ben Aaronovitch, and they were all must-reads, with stunning ideas and swaggering style. 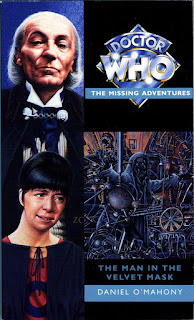 Here's another slice of time and space: One night during this period of New Adventures, I have this ridiculously vivid dream about pain and loss that leaves me with an inexplicable crush on the character of Dodo, a young woman with short, dark hair who was in the TV show in the 1960s and is precisely nobody's favourite companion.

I'm not sure where this comes from, all I know is that I'm fucking shattered when I get to the part in Who Killed Kennedy where she is callously murdered for plot purposes, and it isn't helped when she ends up with a brain-eating STD at the end of The Man In The Velvet Mask. Dodo deserved better. 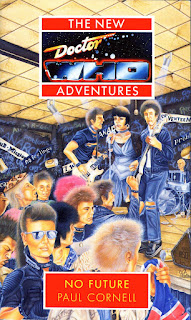 The Man in The Velvet Mask wasn't actually a New Adventure, it was a Missing one. A couple of years into the run of NAs, the editors started putting together new stories about past Doctors, filling in the character's continuity with new travels and confrontations. Some of them emulated the new style, and weren't that successful for it, while ones that were more blatantly homaging the era they were going for worked out all right.

But my favourite Doctor is always, always the current one, and it was the New Adventures that mattered. They started getting deeply weird as they built up a new story of the Seventh Doctor's new role as Time's Champion, a Machiavellian mastermind who played chess with the cosmos and still understood the value of a single life, who negotiates for peace on apocalyptic battlefields and then goes off to play the spoons.

They played fast and loose with the Doctor's world, and I totally understand how it turned a lot of people off, and some of them had the worst book covers I've ever seen on a science-fiction novel (they got tremendously better towards the end), so I can see how Who fans could reject it.

They also got delightfully self-indulgent, with the 50th book a huge love-fest for the whole series, a book line that got drunk on their own possibilities. The end was near, and things got tangled up in psi-war nonsense and real-word computer failure, and the last few books came out of order and became legendarily rare, even as they promised answers to the oldest of questions. 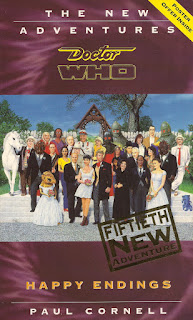 One last slice of time/space is longer than the others, and stretches over a year or so as I get obsessed with these books, almost too late for my own good.

I know about them, but other than watching the odd old story on video, I have little to do with Doctor Who in the early nineties. I see the books in the stores and check out the back covers, but it's only when I get Return of the Living Dead, another continuity-drenched piece of gushing Who love, that I fall for them.

It's fortunate timing, because I'm just able to grab the hardest ones to find before they disappear, and spend the rest of the time buying them in bulk, the first time I ever use the internet to figure out and track down a new obsession.

And it is an obsession - I'm in my early twenties, and my entire pathetic life revolves around getting as fuckin' wasted as possible, re-reading The Invisibles in search of the meaning of life, and tracking down Doctor Who books. It all melts together, and I'm sitting on that damn beach, getting drunk as fuck and spinning out while reading No Future and Flex Mentallo. It all seems so normal. 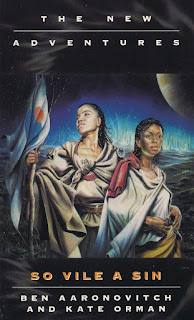 And then it was all over. The BBC books came in and were never as satisfying, with a lack of a strong editorial vision or real point. They got briefly interesting with Lawrence Miles' additions to the saga, but they proved too inherently self-destructive to really get anywhere.

And then, at long last, the TV show came back, and it was amazing, with strong actors and high production values the old series had only ever dreamed about. Most of all, it came back with brilliant stories which built a whole new level to Doctor Who, and the debt they owe to the New adventures is palpable.

There is that same cleverness, and that same naked sentimentality, that could be found in the best New Adventures, and they gave the good Doctor's adventures a new credibility. They could be about more than running down corridors and filling 25 minutes of air time. They could be about anything, as small as hurt feelings, or as large as threats to the universe. 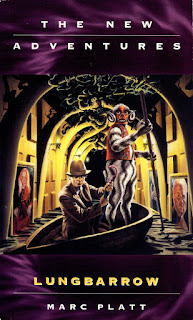 I came in so late, and had to go back and read the books in totally the wrong order. And it too me years to track down the last few New Adventures I needed, which was understandable, considering the last few's pitifully tiny print runs. I paid more than fifty bucks for a copy of Lungbarrow a few years ago, because I had to have it, but the one I could never track down was Cornell's Human Nature, the one that everybody raved about, until I got it the other week.

It was weirdly easier to live with that hole in the collection when the story was used as the basis for a two-part story in the TV show, with the Seventh Doctor's story claimed by the Tenth. But I was always looking for the book then I got it a few weeks ago, and it's done.

I still haven't read them all, because I'll have to be pretty desperate to finally crack open The Pit, but I'll get there one day. Like all particular periods of Doctor Who, it was the perfect thing for its place in time and space, and we've all moved on, but I still have a lot of dopey affection for these stories, too wide and weird for the small screen.
Posted by Bob Temuka at 6:34 PM