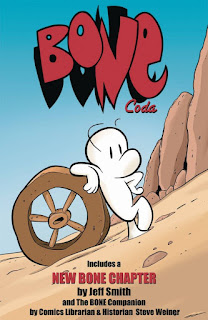 When Jeff Smith finished his wonderful Bone comic a decade ago, it was clearly done. The story which he had been telling since the early nineties reached its natural conclusion, all the plot points were tied off, and there was nothing more to say.

That did not stop Smith from returning to his greatest creation, of course, and he put out a new Bone comic recently, to mark the 25th anniversary of the first issue. It was a great surprise, but also a little concerning. Was there any need for a new Bone story? Was there anything more to add?

Not really, as it turns out. But that doesn’t make it any less enjoyable. 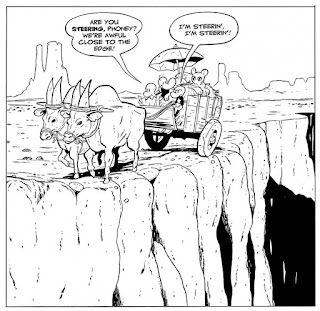 Bone: Coda came out last month as a softcover book, packaged with a lengthy essay on the creation of Bone by Smith, and the entertaining, insightful and only slightly patronising Bone Companion by Stephen Weiner. It’s an all-new 35-page comic that starts immediately after the end of Bone, with the cousins heading out into the desert, heading for home, and getting into another wacky adventure.

And it ends with the cousins heading out into the desert, heading for home, and probably getting into another wacky adventure. There was no great addition to the Bone saga, no vital piece of information to impart – just a big, creepy animal messing up the Bones’ day. 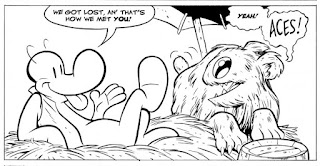 As the title suggests, it’s just a little coda, and is a lot of fun, as fun as any of the other great Bone stories.

It’s funny, with the usual great comic timing, goofy body language, zipping one-liners and mad eyebrows. Smith revels in the slapstick, and always finds humour in the quiet moments between the frenteic action.

And he’s still a great action artist, pacing out a crash or fall over multiple open panels, living in the calm moment before the sudden impact, capturing the uncontrollable grace of bodies flying through the air, and the dusty, awkward landing.

And it is nice to see these characters again, and see them interact, just like they used to. Smiley Bone’s idiotic grin is still hiding a big heart and bigger balls, (and he is bloody great at lateral thinking), while Phoney Bone is as mean and selfish as he ever was, and just as brave and helpful when it really counts. Fone Bone is still the straight man who holds it all together, and Bartleby the friendly rat creature is just as sharp as the rest of them. 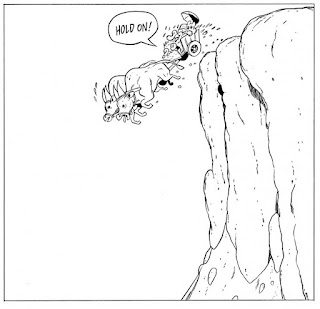 But the best thing about the new comic is that it really is as superfluous as it claims on the back cover. Comic nerds get so hung up on only following stories that matter, like the latest summer mega-crossover, but there are real pleasures in a story that isn’t weighed down by metatextual depths, or its claim to be at the centre of some huge, sprawling saga.

Instead, it is what it is. It’s just a story that is getting by on its own merits. It doesn’t have to matter. It can just be fun. Any fears that it might pick at some thread of the greater story and unravel the whole damn thing, or that it would make the fatal mistake of showing the town of Bownville, are totally unfounded. It’s just a fun adventure.

Jeff Smith’s Bone got suitably epic for a while there, but this is more than enough for one last little story, as long as it doesn't matter.
Posted by Bob Temuka at 10:44 PM