Chrononauts: If I had a time machine.... 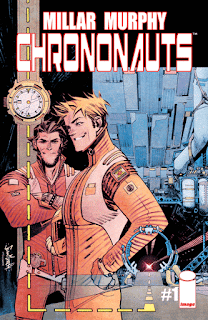 What would you do if you had a time machine? Would you go back and kill Hitler, or find some answers to some of the biggest questions in creation? Would you follow up some of history’s greatest mysteries, or travel to the future to see how it all works out? Or would you use the technology to be in The Smiths and be a shit to Morrissey?

Mark Millar’s comics often come with the stench of hedonistic wish fulfillment, and can come off as little more than daydreaming about what he would do if he had fantastic superpowers. It’s there in almost all of his superhero comics, and is more obvious in books like Super Crooks and Superior. MPH, his Duncan Fegredo-drawn comic about working-class super-speedsters, was the most obvious example until now, as Millar had his heroes use the ability to travel incredibly fast to amass ludicrous amounts of personal wealth and play crazy practical jokes before the inevitable comedown.

But at least MPH pretended to have a story underneath all that self-indulgence, even if it was the most simplistic thoughts about class and race. Chrononauts, which was drawn by the great Sean Murphy and published last year, doesn’t even have that, and might be the most superficial thing Mark Millar has ever written. Which is saying something.

The ‘heroes’ of Chrononauts are a couple of jerk dude-bros, who crack the secret of time travel, and use it to blast around the timestream, stealing credit for things like The Beatles’ music, Breaking Bad and Harry Potter, and conquering some of history’s greatest empires by using rad future technology.

It’s hard to tell if we’re supposed to feel any sympathy for these shitheads as they leave piles of dead bodies and time paradoxes behind them. Some trite moralising at the end about making time to spend with your loved ones comes far too late to give a damn.

The rest of it is infantile fantasizing – ‘If I had a time machine, I’d snog Cleopatra and shoot dinosaurs with a bazooka and make dumb jokes at the birth of Christ’ – in search of a story. I just read it half an hour ago, and couldn't twll you much more about the comic than that. 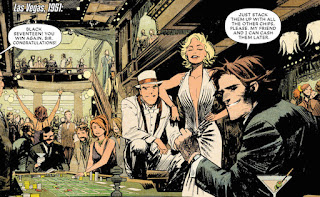 Because that’s it, there is nothing more. I’m certainly a Millar apologist, and can usually find something nice to say about his most vulgar works, but sometimes even he leaves me cold, and this one did.

Shit, I even liked The Unfunnies, and this comic didn't work for me at all.

At least, like almost all of Millar’s comics, it has a decent artist, and while it seems like a waste of Sean Murphy’s time to be working on this rubbish, he still makes it look great.

After all, Millar may occasionally go off the rails, but his ability to give artists cool shit to draw is undiminished, and Murphy seizes the chance to render rampaging dinosaurs, ancient badass warriors, gangsters and pop stars.

His sketchy detailing gives his comics an energetic pace, while he gives the humblest of background characters some supremely goofy expressions, helping them to stand out from the crowd. 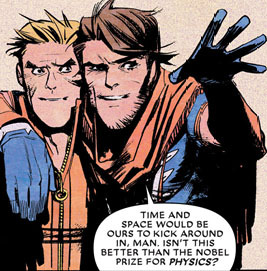 But even with Murphy's best efforts - I can only hope that he made enough from the movie option to justify this crap - it’s that adolescent wish –fulfillment that starts to grate after a dozen pages.

Millar has been doing the whole ‘what cool things can you really do with awesome superpowers and crazy technology’ things for most of his career, and it’s one of the few tics he still regularly uses from the days when he used to slavishly copy Grant Morrison’s style. Morrison did it all first in Zenith, more than 30 years ago now, when he realised that if he was superhero, he wouldn’t go around getting into punch-ups, he’d be trying to get on Top of the Pops instead. Millar is still following in those footsteps, without really adding anything new. 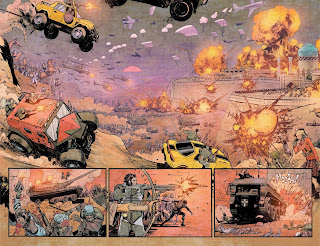 There is always the possibility that Millar is taking the piss, and that you’re supposed to think of the main characters in Chrononauts as fucking idiots who deserve all the shit that comes down on them, but it's too awfully sentimental about them to argue that case. I think we're actually supposed to give a damn about them.