Hellboy in Hell: A light for the damned


When Hellboy fell in his final battle against a Great Dragon, his story was far from over, and his path was still clear. He was heading to Hell, to face his final destiny, one way or the other.

There was a good chance he was going to seize control of the armies of Hell, and march them out onto the Earth, either to save it from greater threats, or to lay waste to it. Even though he was dead, it looked like his story was far from over.

But his creator knew better, and Hellboy really was dead, and while his story continued, it was heading towards a quiet of end, and an empty and silent Hell 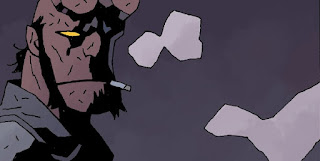 Mike Mignola's Hellboy comics never went where you really expected them to go, and there were plenty of shocks and surprises over the past few decades. Combined with some of the modern comic books' finest art, this unpredictability made Hellboy something that was always something worth watching, (even if it took too damn long for some of us to come around).

Mignola's last surprise was the melancholic and haunting nature of his Hellboy in Hell story. It's a comic that is as beautiful as it ever was, taken to a whole new level as the ghost of the artist's favourite creation wanders around with the doomed and the damned. 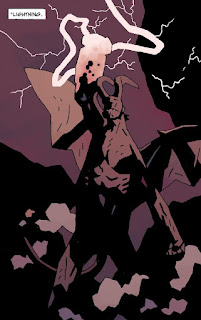 The 10 issues of Hellboy in Hell were still goofy and absurd as Mignola indulged in his deepest, darkest whims, all held solid by the usual straight-talking and no-nonsense of Hellboy - no character in all of comics is more likely to point out how screwed-up a situation is getting, even as he is hip deep in it.

The great benefit for Mignola of setting the story in Hell is that he is free from the shackles of realism and little things like the laws of physics - the bane of all great fantasist artists. So he can let his imagination run free and populate the story with all new monsters instead of wasting time on real life things like power poles and cars, and can follow artistic whims all the way, no matter how weird it gets.

So there are still demonic monkey bartenders, and grotesque leviathans from the oceans of Hell, and hordes of  the forgetful dead, and shifting geographies, and buildings that are more metaphor than mortar.

Sometimes it' s a murder mystery in the halls of Pandemonium, and it's one of those stories where the main character is the killer all along, and he doesn't know it. Sometimes it's just an action movie, with Hellboy laying the smack down on some fool.

And it's a story about the end of all things, as the streets of Hell empty out. Even with a shifting landscape, Hell is limited, and has an end, and there is nowhere to run. 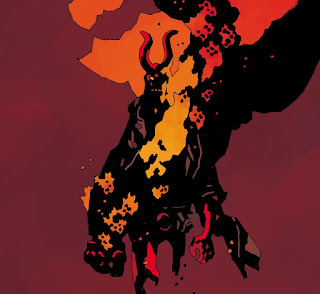 It does all end with a giant Hellboy striding across Hell, after embracing the power that was always his destiny. And he uses it to extinguish the last flames and destroy the last great houses, and close the door on it all.

It's an ending of epic grandeur  that still manages to be fairly low-key and unsettling, because it all happens in silence, and because it's not told from the main character's perspective at all, but from one last, dying demon, who seeks the comfort of family at the end of all things. 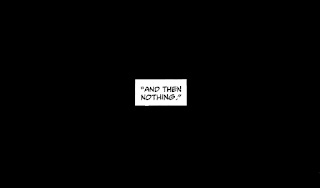 It's a pretty damn dark way to end the series, and raises unsettling questions, like where do the dead go when they die? If the damned aren't welcome in Hell anymore, where do they end up?

It does get epic towards the end, but the overall tone of Hellboy in Hell has been that melancholic one. A tone of hopelessness and loss and despair, because life is over, and there is only this cold eternity. 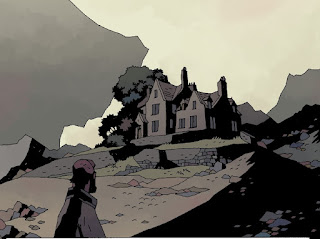 Mignola hasn't fully ruled out some further chapters in Hellboy's story, but if this is it, then it's a fine and fitting end for the big guy. Besides, there are decades of Hellboy's adventures on Earth still to tell - we're still in the early fifties there - and the effects of Hell's fall are already impacting on the ongoing BPRD title.

It's up to Mignola, and if he's off to paint for a year or two, then he's more than earned the break. Hellboy has always been the artist's purest vision, even with his company of talented collaborators, and it all depends on him. He's done well by following those whims, and it will be fascinating to see where they take him next..
Posted by Bob Temuka at 6:52 PM