Aama: What is this future? 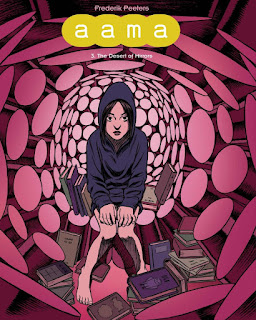 Comic creators who set their stories in the far, far future are given free reign to get imaginative and inventive, but always face the problem of keeping things identifiable.

Comics like Brandon Graham's excellent Prophet series just manage to keep things audience friendly, even in a universe where the only human face is the same cloned John, and the landscapes, food, transport, clothes and cultures are all entirely alien.

The world of Frederik Peeters' fantastic  Aama comics is somewhere in the deep future, but still features a world that is still recognisable as something that has evolved from our own. Something to hold onto.

This does not last. 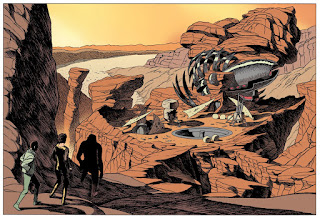 Aama is a four-book graphic novel about a shattered loser sent off on a strange expedition across a great alien landscape, published by Self Made Hero over the past few years. It's the Swiss artist's biggest work, and manages the always welcome trick of being a rollicking adventure tale that tackles some big philosophical questions.

It also has weird robots that look like gorillas that have suspiciously human legs; and grossly alien landscapes full of things that shift and don't make sense; and hyper-sonic armored insects that mindlessly rip flesh to pieces; and a technological evolution that goes beyond organic, into something pulsing, strange and alive.

The artist has a very open and inviting style, with a smooth and flowing line, even in jagged action. The story is also told in bright, blocky colours, which helps the reader get into this mysterious new world. Things get very fucking strange, very quickly, and it's all easy enough to follow, even when reality itself breaks down. 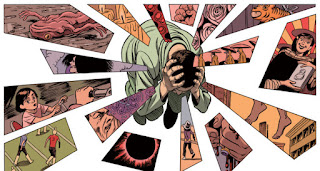 Once the main character really gets into his quest, it swiftly all goes mental, and gets a bit philosophical, as matter breaks down on a sub-atomic level and the borders between reality and dreams all merge into one.

Human beings are killed with horrific indifference by a new life form, which doesn't look like anything we could ever understand, even as it proves able to get inside our heads and twist our thoughts.The reality of the story takes on a queasy dream logic, where anything goes and anything is possible, before being shat out the other end of something disturbingly blobby.

It's all a bit of a mind trip, but it is highly readable, with a good mystery plot going on - the main character has lost his memory, and he has to reread his own story, while a young girl that looks exactly like his daughter shows up on the other side of the universe.

And there is plenty of mortal peril and adventuring, and action scenes that fizz with energy. By the end of things,it somehow turns into a superhero saga, as a new and evolved man is able to twist reality to his whims, and falls back into a world of fragile humans, only to battle another mega-powered creature

And it's all about a Dad who loves his kid, and is piss-poor at showing it, so he has to go to the far side of creation to prove something to himself. 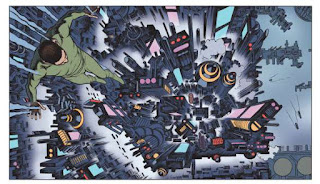 It's a whole new world by the final pages, and while it's not clear what that actually means, it is an optimistic conclusion, full of possibility. There is so much blood and fears to get there, but it's a path worth taking.

Any new world is going to be incomprehensible to those who live before it. Some things are eternal, but the world changes, all the same.