The most conspicuous – if unsurprising – omission in Marvel Comic's latest round of relaunches was the Fantastic Four. After more than fifty years of continuous publication, there will be no monthly Fantastic Four comic in the new year.

It really is a muted end to an era – the Fantastic Four launched the whole Marvel Universe on the back of Lee and Kirby's stellar decade of comics, and it's always been there, through thick and thin. It hasn't really been able to live up to the World's Greatest Comic Magazine' for most of the time its current readership have been alive, but it was a constant presence, even as just a bedrock symbol of the company's identity.

But it's still hard to worry too much about its disappearance. We all know the Fantastic Four will, after all, inevitably return as a team one day. Just because there is no Fantastic Four right now doesn't mean there never will be again. And it could use the break. 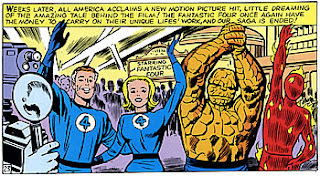 After running non-stop for years, the entire Fantastic Four concept is looking a bit tired. Attempts to refresh the idea for a whole new millennium have been greeted with general apathy, right up to the point of the most recent movie, which managed to make adventurous exploration of an alien dimension look gritty and boring.

There have still been plenty of terrific Fantastic Four comics since the days of Lee and Kirby. Marvel's editors have often hired some of their top creators to have a crack at the title, and there have been lots of fun and ingenious stories, beautifully illustrated by some of the industry's best artists.

And yet, while these stories have their fans, they still never really catch fire. The Fantastic Four might be an absolute-must read for a short while, but only for a while.

By biting the bullet and giving the title a rest, Marvel can now take its time, waiting for the right moment, and the right pitch. The inevitable return will be a major event for Marvel, but if they can come at it with a fresh, new and exciting angle, it could be even more massive. 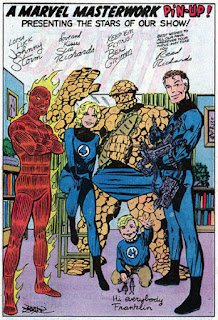 After all, it works so well in other media. Look at how Star Wars fades away on a relentless onslaught of average spin off novels and comics, only to get everyone excited again when a big new movie comes along.

And it's especially good for stories that have been running for decades. I still maintain that Doctor Who is still the greatest TV show there ever was, is or will be - and the most recent episode, with Capaldi eating up the screen for the full hour, was a stone-cold brilliant episode - but I really haven't been bothered by recent talk of a longer gap until the next season.

They did it for Tennant, with his final year in the role confined to a bunch of one-off specials, and it built up the appetite for each new story, when they were so rare. When you're getting new Doctor Who every year on schedule, a general malaise creeps in. We've seen it all before, and recently, too.

Hell, when Doctor who was taken off the air for 15 long years, with only a McGann interlude in that time, my obsession with the show was at an all-time high, fuelled by video releases of the classic stories, surprisingly meaty issues of Doctor Who Magazine and a mad hunger for the New Adventure novels. 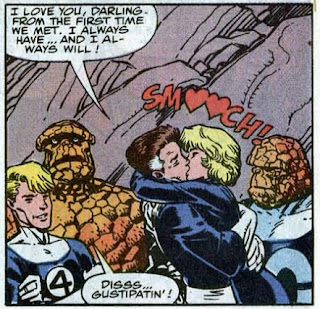 When Doctor Who came back in 2005, better than ever, it was worth the wait. Incredible production values, impassioned performances and sophisticated script-work wiped away all those wilderness years, and restored the programme to full glory.

The Fantastic Four has been running almost exactly as long as Doctor Who has, but hasn't had that kind of gap. It could use it. 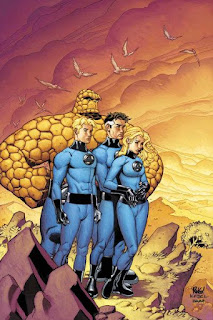 It's worked for Marvel already, in the relatively recent past. A while back, sometime around the turn of the century, the Thor comic reached another apocalyptic conclusion, and actually ended this time.

Even though the big man still showed up in Avengers comics and the like, after 40 years of continued adventures, there was no Thor. And Marvel actually managed to restrain itself for a couple of years before bringing him back, to pleasing success.

They could have waited longer, and created an even stronger comic to come back with, because they quickly ran out of ideas again, but it was a great example of the benefits of taking a rest stop. 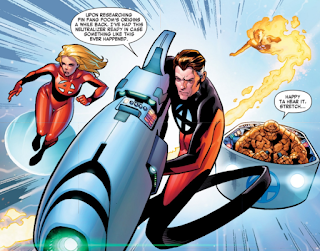 In fact, the comic that is arguably Marvel's greatest ever was cancelled for a while. The Uncanny X-Men devolved into reprint hell in the early seventies, fading away entirely for a little while before exploding in an all-new team in the hands of of Claremont/Cockrum.

The original X-Men have their charms, but it was only when the gave way to a more international flavour that the comic become something incredible. It was only after they were rested and retooled, that they found success. It's a lesson Marvel learned decades ago, and they're still playing that game. 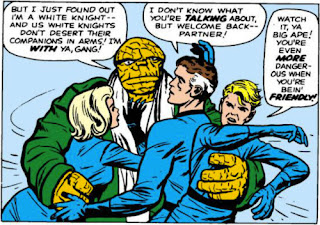 I do wish Marvel could go all the way, and not feature the Fantastic For themselves in other books, but I know they won't be able to resist putting the Thing in the Guardians of the Galaxy, or team the Human Torch up with Spider-Man.

But there is still a melancholic air around the whole Fantastic Four, and the bitching about rights, poor movie and generally average comics has led to the only possible conclusion. Time to put these characters to bed for a while. Let them rest, and see what they've got to say tomorrow.

Good night, Mr Fantastic. We'll see you in the morning.
Posted by Bob Temuka at 4:14 PM