The issue of creator's rights used to be so simple. I had it all figured out. All the moral and ethical rights belonged to the creator, and it was a great injustice that they didn't have all the legal or financial rights. Anybody could see that.

That ideal is still out there. It's still valid and it still does work for many of comic's greatest creators. Everything that was ever published in Love and Rockets belongs to the Hernandez brothers, Evan Dorkin will always be the only artist to do proper Milk and Cheese comics and nobody but Frank Miller will ever own a piece of his Sin City comic, unless he wants to give it to them.

But the history of the comic industry is still full of outright injustice and it’s always worth pointing out that this shit is not acceptable, and that companies that have made millions from certain characters and series should always, always acknowledge and suitably reward the creators, and they should always respect their work and opinion.

But it's not as black and white as it used to be. I might be just as militantly opposed to creators getting fucked over as I ever was, but now I can’t help seeing that there are all sorts of grey areas.

Image fucked up the utopian ideal of creator rights – all those arguments in eighties convention hotel rooms  faded away like the smoke after Youngblood. That didn’t mean the battle for creator rights wasn’t worth fighting any more, it just meant we couldn’t pretend that this would usher in a golden era of great comics. (It can certainly be argued that it eventually did, but it would take years and years, and that definitely wasn’t how it looked in 1993.)

And there certainly are people still fighting the good fight – Peter B Gillis has recently stuck to his guns on the possibility of Strikeforce Morituri becoming a TV show, and has the undisputed moral high ground, (especially if reports of some incredibly ham-fisted attempt to grab the rights are accurate). Gillis is smart enough that he wasn’t tempted by the breathless offer to “get exposure”, and would rather hold on to his rights as they are, and deal with any new version of his story on his terms.

And that’s something I can rightly get behind. But when that line of thinking means I could have missed out on the greatest comic story I’ve ever read altogether, I’m suddenly more conflicted. 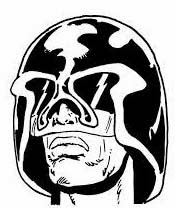 Judge Dredd is the most thrilling, exciting and stylish comic story I’ve ever read. It’s now been running for almost four decades, and has grown as a story to become this vast, weird tapestry, with real emotional depth and storytelling that can take decades to pay off. And if the original creators got all the rights they were morally entitled to, it might never have existed in its current form.

In David Bishop’s Thrillpower Overload, the absolutely essential history of 2000ad, the original publisher John Sanders repeatedly makes the point that he had no great attraction to the title and he was quite willing to shut the whole comic down in the early days if it got too problematic, but it kept making money for the company, so he was happy to let it run. But he also repeatedly stresses that giving the actual creators any slice of the pie, or any kind of overall control, would have made the comic strictly unprofitable, and he would have cancelled it without a second thought.

Which means those creators who have made Dredd such an incredible long-form story would never have even got the chance if they had got what they really deserved.

This is a deeply selfish opinion on my part – screw the creators, I just want this crazy 37-year story. And I can't help but hope that if they hadn't worked on Dredd, they would have created something just as lasting, and as deep. But it's far more likely that they would have faded away from comics altogether, and we might not have even heard these rich creative voices on this incredibly versatile and adaptable comic.

Besides, while it is noted that John Wagner and Carlos Ezquerra are the original creators of Dredd – and it was incredibly satisfying to see their names come up first on the credits of the most recent Dredd film – writers like Pat Mills & Alan Grant and artists like Brian Bolland & Mike McMahon have all contributed vital aspects to the look and feel of the Dredd world, and dozens and dozens of other creators have added interesting pieces to the story. Don't they deserve something too? 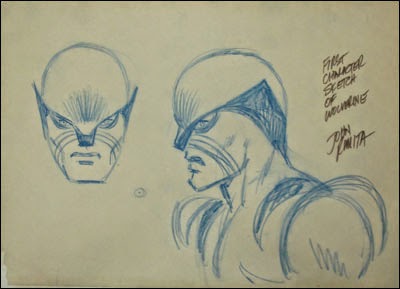 The issue of multiple creators on work-for-hire mainstream comics clouds things considerably. The truth about who created what can easily be distorted or lost over time, and while there is usually a primary original creator, it's not that simple.

After all, some creators can't even agree on the definition of the word. Lee and Kirby had entirely different definitions of what ‘creator’ actually meant, and they both have valid points that are irreconcilable. Wolverine first appeared in a comic by Len Wein and Herb Trimpe, but John Romita designed the look of the character, and the incredible popularity of the character is almost entirely thanks to Claremont, Cockrum and Byrne – they all the credit, and they do deserve some rights, (which they are, admittedly, extremely unlikely to get).

Wolverine has generated millions of dollars in revenue over the years and those responsible for that popularity should certainly get a slice of the pie, but it's hard to advocate for those slices when nobody can be sure who really deserves it, even those who had a definite hand in the creative process. 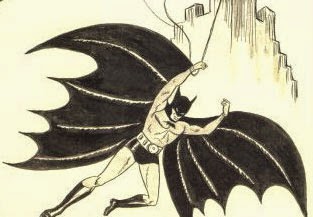 These kind of situations keep getting more and more complicated - I long ago lost track of the deep, sticky mess of the Marvelman mire. It is always a little surprising when something like that can actually get sorted out, and series like Marvelman do actually get published again, (even if the credits do get horribly over-complicated).

I'm always going to be on the side of the creator who takes on the corporation for their moral rights. But the simple black and white ethics that I could once stand behind have been eroded by uncertainty and recriminations. Creator rights are an essential part of any major artistic movement, but working out which creator to support just isn't that simple.
Posted by Bob Temuka at 10:38 PM