Who can rid me of these troublesome Wizards?

The lovely wife and I are moving house in the next month, so I have to get my shit sorted, and that takes weeks. Getting all the thousands of comics and books and movies and other shit into order, and all boxed up, ready to shift.

It's actually a fairly painless process, and I even enjoy it a little bit. Digging into boxes I haven't opened since the last time we moved, and finding scraps of short stories I wrote when I was 11, or forgotten magazines about horror movies, is always embarrassingly exciting.

It's also a good chance to ditch a bunch of stuff, and this time is no exception, as I made a small pile of things to go to charity. This time I finally decided that I didn't really need that small pile of British music magazines from the late nineties, no matter how much they remind me of the Best Summer Ever, or that I had never even glanced at the MUP Encyclopaedia of Australian Science Fiction & Fantasy that I've been carting around for years, and probably never will. 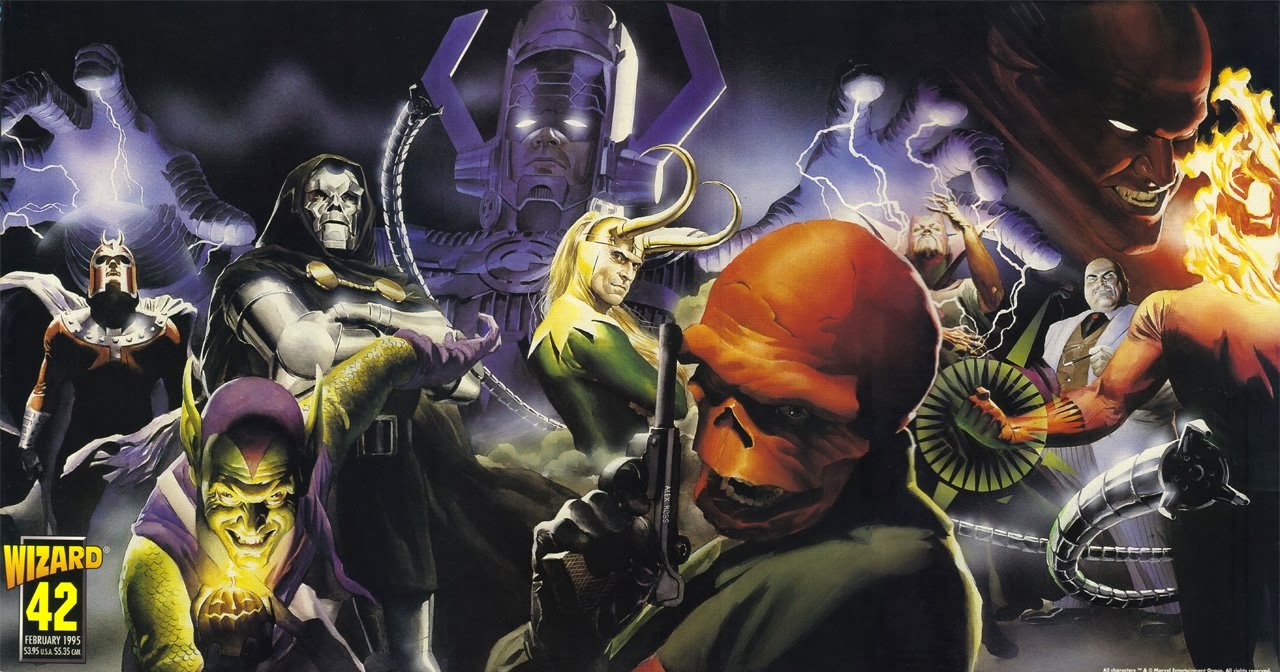 I managed to skim off a couple of banana boxes full of magazines and comics I didn't really need any more, and that's actually better than usual, even if I have another two dozen that I couldn't bear to part with.

I didn't ditch any comics by any favoured creators (and there are dozens and dozens of those guys), and I'm still holding on to all my Neon movie magazines from the mid-nineties, because that's the first place I ever got my name in print. I still can't throw out any of those Federal reprint comics from the eighties, because they were the first place I ever read Byrne Fantastic Four, Simonson Thor or Miller Daredevil, even if they're losing their covers.

And, once again, I completely failed to get rid of any issues of Wizard magazine. That's not right, but I just can't. I love the Wizards. 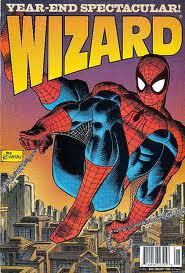 I have about 30 issues of Wizard, all stashed away in the same box that has been sitting under the bed for years. They mainly date from around 1995 until around 1998, although there are a few stragglers from outside that timeframe, and I have far more issues than I really need, but I keep holding on to them.

Let's be clear – I think Wizard magazine had a terrible impact on the comic medium, culture and industry, mainly through the fierce devotion to the speculator mentality, but also through a crass and outright sexist attitude masquerading as humour, and a hypocritical sniffiness that saw it declare that good stories were the main reason for successful comics, while drooling over near-illiterate T&A garbage.

Nobody who wasn’t directly involved with Wizard magazine gave much of a shit when it finally withered away a couple of years ago. Its news coverage had long been supplanted by the internet, and one homophobic ‘joke’ too many had left it with little goodwill. There was some vague effort to take the magazine online, but that didn’t go anywhere, and Wizard passed into history, its memory living on a legacy of the lowest common denominator during a particular era in comic books. 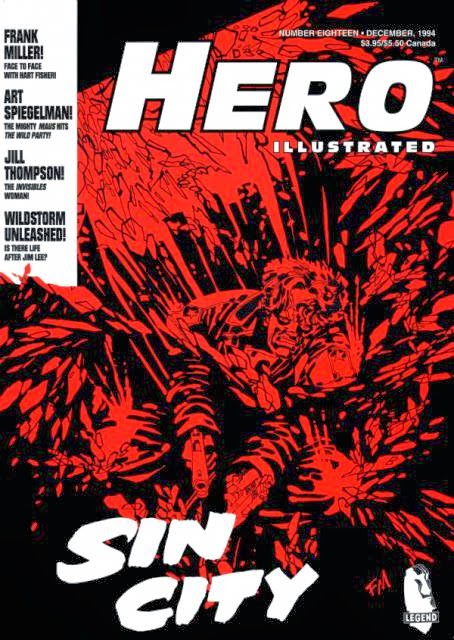 And yet, there was a time when I happily grabbed every new issue of Wizard every month, and I would devour those things.

I actually came into Wizard through Hero Illustrated, a Wizard clone that went for a slightly classier tone. I stumbled across a copy of that magazine one Friday night, when I went into town to get my regular Red Dwarf Smegazine, and I thought it was outstanding. This was the early nineties and I'd never lived anywhere near a comic shop, so I was still relying on the Johnny DC and Stan's Soapbox columns for all my comic news, and these mags had hundreds of pages of news and analysis and price guides, (mainly used to help figure out when, say, Morrison started on Doom Patrol).

While I still have a few issues stashed away, including that first one I found that fateful Friday night, Hero Illustrated only lasted a couple of years, and then the local Paper Plus bookstore started getting Wizard magazine every month instead, so that was an easy switch.

And it really was one of the few ways of getting any type of information about new comics for a while. The internet existed, but the idea of websites updating daily with all the latest news was still a couple of years off. There were other print options - there was always the good ol’ Comics Journal and things like the Comic Buyers Guide, but I never even saw any of their issues in the small town I lived in. Wizard really was the only source of any type of comic news and analysis I could get my hands on. 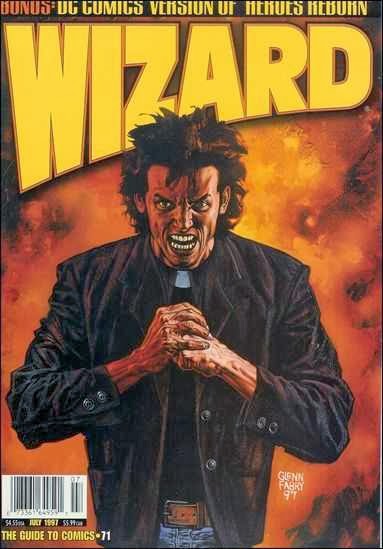 I could still recognize a lot of its faults, but that smug frat-boy tone eventually got a bit much after a while, and I stopped getting it regularly, and only bought two or three more issues before it eventually faded away.

So here we are, more than a decade and a half after Wizard’s heyday, and I still have those 30 back issues, and I pulled them out again for this purge, and started flicking through them one last time before I ditched them, and then I put them all back again, and they’re coming with us to the new place.

What is wrong with me? These aren't worth holding on to, are they? 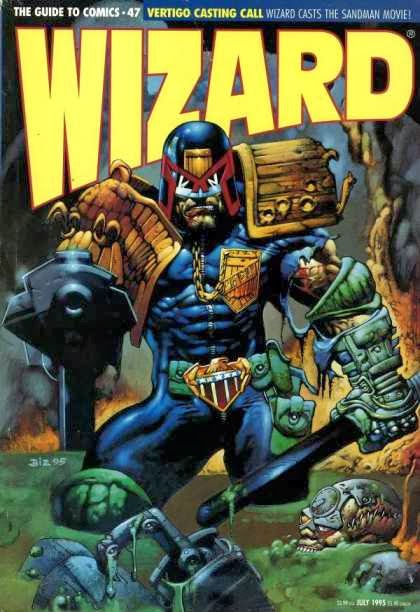 It’s partly that nostalgia thing that justifies it, because I do still feel that thrill of discovery as I crack these things open every couple of years. And they are total historical snapshots. I still find it fascinating to see what Wizard considered the hottest books in June 1994, and I’m even more fascinated by the various top ten writer/artist lists, and how much they actually resemble modern lists, and what that says about the pace of change in the comic book industry.

It’s also partly because there were actually some nice articles and interviews, capturing the thoughts of creators at a particular period in their careers, and it's bloody interesting to see how their attitudes have changed over the years. Wizard also had some nice covers by some of the best artists in comics over the years, and even though there were also loads of Rob Liefeld and Jim Balent covers, some of them are still visually striking. 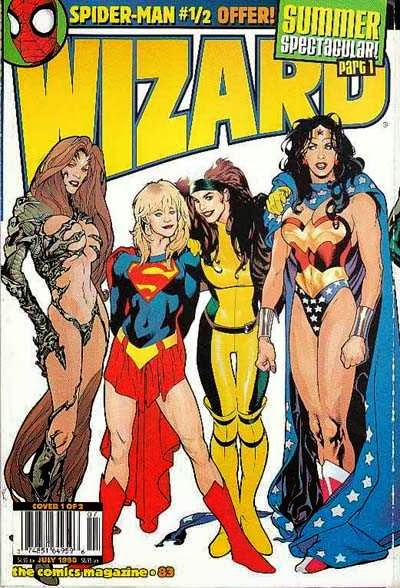 But the weirdest reason I hold on to these Wizard magazines is that they actually make great reference material. The issues I still have were all bought during the absolute peak of my comic-buying obsession, between the ages of 17 and 25. I bought thousands and thousands of comics over those years. And then I got rid of thousands and thousands of them over the years since, and there have been so many, sometimes I forget that entire series even existed, or what they were about.

But then I look at these Wizard magazines, and they’ve got previews and reviews of all this stuff, and I find I don’t need to hold on to those old issues, when the magazine can trigger the same feelings of pleasant nostalgia.

I don't need the forty issues of Ron Marz Green Lantern comics that I once had, or all the Amalgam comics I once owned, when a couple of Wizard pieces remind me of everything I enjoyed about them at one time, and of all the plot points and creator shuffles the various titles went through.

These 30 magazines are a record of this particular time in comics, one I still have a lot of fond feelings for. And when those feelings are often undermined by the actual reality of shitty comics, the memories sparked by an old Wizard are more than enough. 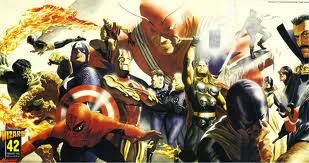 I know that holding onto to these awful - and almost harmful - magazines is a real weakness of mine, wallowing in the past through the medium of crap. I know I should just dump these old magazines in the recycling and move on, with no regrets.

Hey, enjoyed this particular article. You definitely layed some legit reasons for judging Wizard as sexist frat-boy humor, since there does seem to be some small measure of legitmacy attached to those examples. I'd say I still gotta' disagree with you on just how bad it was though. I guess at the end of the day it all boils down to one's own personal preference. I enjoyed the jokes, good and bad, but usally pretty good. Hell I they stil rate a good chuckle/lol at some the crazy comments/commentary/shit they'd used to say and get away with. They were, as you said, of their time, so yeah hindsight being what it is, and the evolution of society since then, it's probably easy to be cynical in regards to them now. It's cool, to each his own.

C'mon, you seriously didn't love Keep-Squeezin' Em Lad? The Mort of the month? The Letters Page. Oh my god how funny were the letters and the responses to the letters. Some of em would even be referenced in future issues.

I will difinitely agree with you on Wizard declining when the internet got big. Some could agree by the 100th issue, and maybe by the 150's. I know for me I first knew wizard was going downhill was after issue #201. Ooof, that was a sad day for me. I guess the nostalgia and routineness of it all helped keep Wizard aflot longer than it probably should. I know ol' Gareb was the main source of the probelm, as well as hearing how the cut-throat practices of the Wizard Cons didn't help the magazine. Not to mention the horror stories from ex-editors and writers, and the website. I don't know if the guy lost interest or what, and if so he should've copped to it or handed it off to someone who would've taken care of Wizard. Damn shame, but yeah, most of us weren't suprised by it's cancellation. It was no longer the magazine I once loved. it's dearh, a true mercy killing at that point.

Oh well, anyways, it was good for what it once was, so yeah, keep those copies dude. I'll take em off ya if you wont;)

I'd be lying if I said I didn't laugh at the letters pages, and I'm still fascinated by the strange Iron Man v X-Men debate that cropped up there.