This is the fifth birthday of the Tearoom of Despair. I’m surprised it has lasted this long, but have no plans to stop any time soon. Thanks to all those who sent in lovely emails, or left a comment, or contributed a guest post, or just read something I wrote and said ‘Huh…’

This is also my 39th birthday, so I’m going to avoid the fact that the long, slow slide of mortality is getting a bit too steep for my liking by talking about the day I turned 12, and about how my Mum is the best Mum ever. 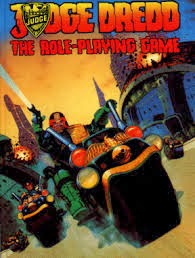 It was almost the worst birthday ever. Just too old for any cool toys, too young for anything that would impress girls, and the whole family thought I had too many books or comics as it was, so there was no chance of anything like that. (I had more than 200 comics, which was considered fairly outrageous.)

So most of my twelfth birthday was spent walking around the finest clothes and shoe shops in Timaru, and getting lots and lots of extremely sensible presents, and man, I was the grumpiest little shit by the end of all that, rallying against God and the universe for putting me through all this on my birthday.

And then my Mum – my wonderful, patient and sympathetic Mum – bought me the Judge Dredd Roleplaying Game, and all was right with the world again.

I remember it was bloody expensive, almost fifty bucks in New Zealand 1987 money, so I had to give up all the birthday money I’d scored, and she’d pay for the other half, but I thought that shiny box sitting on the shelves of Chapter & Verses was the most gorgeous thing I’d ever seen, and it was totally worth it.

I’d been reading Judge Dredd comics since I was six, but I’d never played a role playing game before, and only had a vague idea of how they worked. Mum was a little put off the whole concept when one of my aunties told her that she’d heard that people who played role playing games ended up fighting in sewers with swords, but she got me it anyway, and it was the best birthday present ever.

You didn’t get much for your fifty bucks – a couple of sourcebooks, a bunch of tiny cardboard cutouts, some funky dice and a fold-out action map of a shuggy hall – but I didn’t care. I know this makes me sound like the shallow little shit I was, (and still could be), but that role playing game made it the best birthday ever. 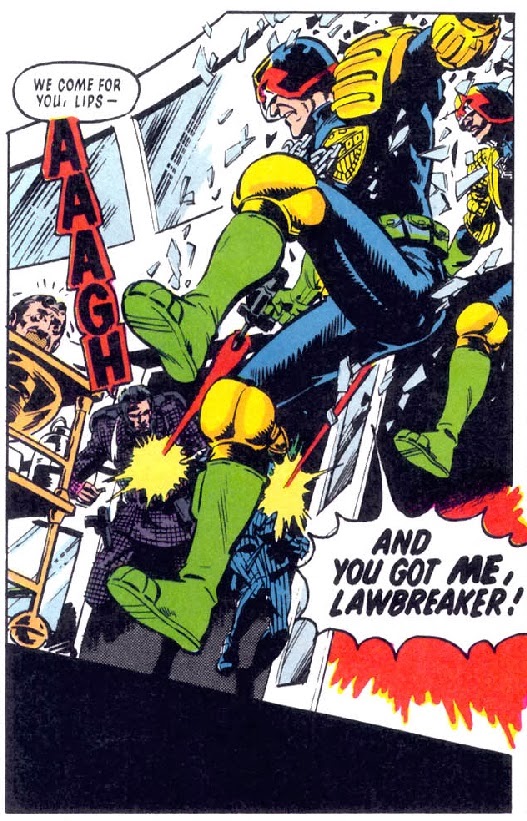 (The shop where I bought the roleplaying game was also the first place I ever bought a Terry Pratchett book, and where I bought many of my first cassette tapes as a teenager (including my first Cure and Queen albums), and where I got a copy of the Miracleman Golden Age collection and a hardback collection of Morrison and Hughes’ Dare, two of the few graphic novels that ever showed up in Timaru.

It only just closed down last month, and even though I hadn’t bought anything from there in more than a decade, I was sorry to see it go.) 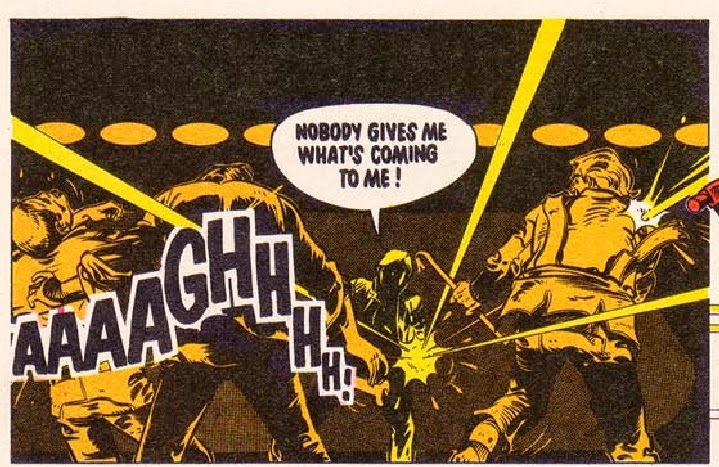 But the really funny thing about getting that roleplaying game was this - I never actually played the damn thing. I tried once with some of my geekiest mates, but it was a hot summer day, and we all got bored quickly and buggered off down the river for a swim.

Even though I did have some friends who went hard for the Dungeons and Dragons, I could never get my head around the way so much of the game took place in a nebulous form. I loved board games, with their hard rules and absolute results, and the idea of leaving it all up to some gamesmaster just felt so unsatisfying.

In fact, me and my mate Anthony actually converted the Dredd roleplaying game into a boardgame for a while, coming up with an arcane system of attack and defence dice rolls to move Judges and perps around gameboards that included that shuggy hall and a surprisingly suitable Cluedo board. It worked out pretty well. 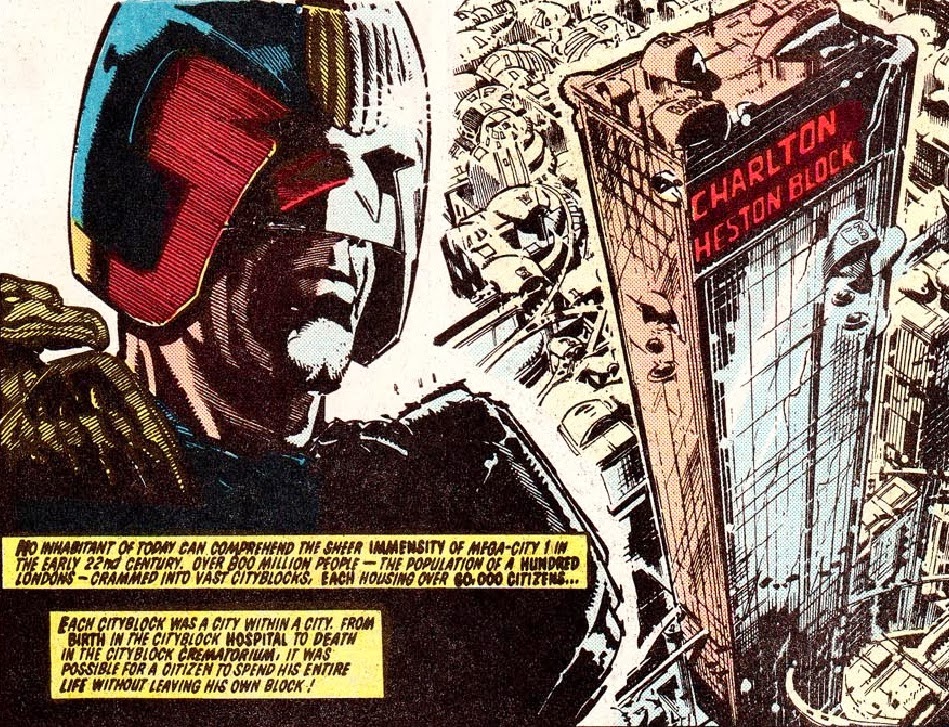 But while I had terribly noble pretensions of actually playing the game when I bought it, the best thing about getting the board game was those sourcebooks, because they were stuffed with fascinating data about the world of Judge Dredd.

I had been reading Judge Dredd comics for half my life at that stage, but it had been a sporadic experience. I’d missed out on a lot of great Dredd over the years, and had to catch up on things like the Apocalypse War and the Judge Child Quest through the Eagle reprints and Best of 2000ad Monthly. When it came to the background of Dredd’s world, I had the basics all sorted, but a lot of Mega-City One’s more insane details were a total mystery.

Until I got my hands on that sourcebook, and hoovered up all those details. I still know which year Dredd was born (and why he is both a newborn and a five-year-old at the same time), from the role-playing game. And there was pages and pages and pages of this sort of this stuff, covering the culture and history of Dredd’s city, and detailed profiles of all the main characters and groups that inhabited that world.  It's where I memorised the name of all of the Cheif Judges, and it's where I first read about the slightly impossible Vienna Dredd, or the ugly craze spawned by the mighty Otto Sump.

In those pre-internet days, roleplaying games that were based on an existing property were often invaluable for info like this. The Watchmen game in the 1980s was famously packed with hundreds of tiny little tidbits that filled in the background of the world, and I found that Judge Dredd roleplaying game just as useful. 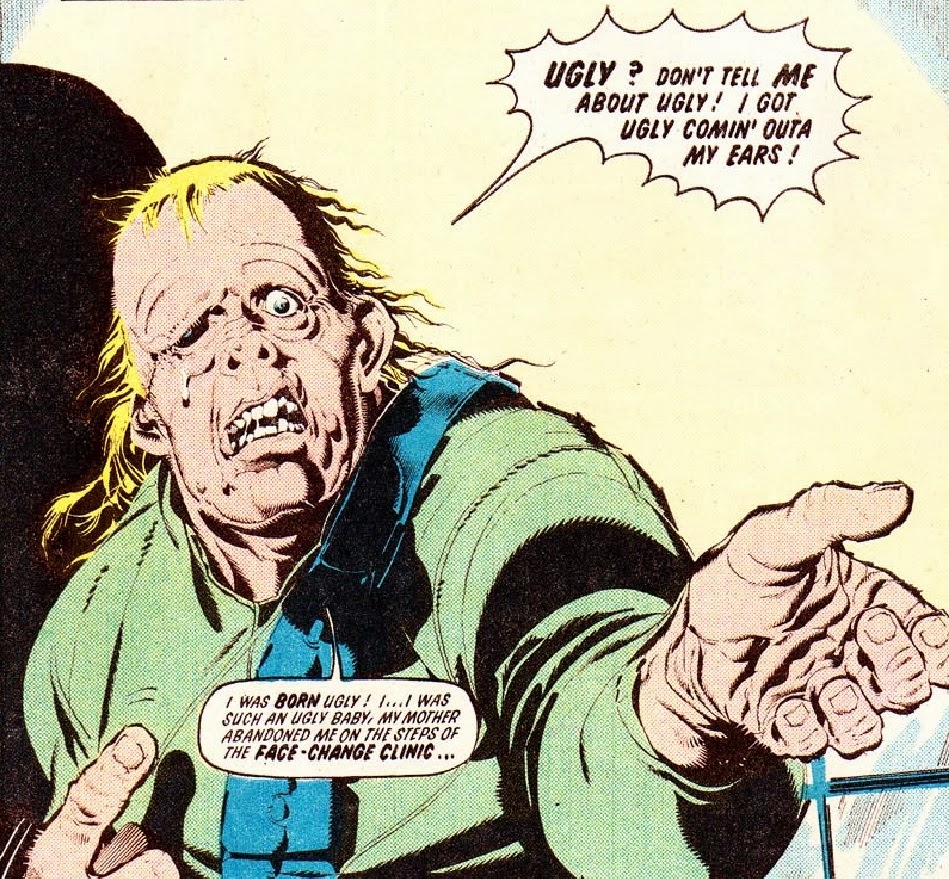 So what if we never actually played the game? It was still the best birthday present I ever got. I still have the books, and that shuggy hall map, and just last week I found I still had most of those little cardboard character cutouts, hidden in a Trivial Pursuit box in the spare room.

But it wasn’t my favourite birthday present because of the contents of that box, and, as incredibly useful and addictive as it was, it wasn’t that massive information dump either.

It’s my favourite present because it’s the ultimate example of my lovely Mum going out of her way to fulfill her son’s geekiest tendencies, and even encouraging them. I really was a miserable little bastard after spending all that day trying on nice shirts and comfortable shoes, but that just made the joy of the perfect present even better.

The second best birthday present I ever got was also from my Mum , and it was a video copy of the original Dawn Of The Dead she bought be when I was 16, and I watch that fucker a hundred billion times. But I’ll save that reminiscing for next year, when I will be trying to ignore the fact that I’m 40.
Posted by Bob Temuka at 6:12 PM

Well, yeah. I could never find that one issue where Vienna was introduced, and it was a story that was rarely - if ever - reprinted, so I only knew about her from the roleplaying game. And I just couldn't figure out how Rico could have a young child when he's been chilling on Titan for 20 years, and I literally spent decades wondering about that, and could only come to the conclusion that she was "slightly impossible".

Of course, when she did finally return, John Wagner sorted all that out with a couple of lines of dialogue, because that's what John Wagner does.

RPG sourcebooks are great. I had a thing for a game called Rifts when I was in my early teens and recently dug one of the books out again while tidying through some stuff. Sucked me right back in - giving you the building blocks without the story to hang on it and leaving that bit to your imagination. And everybody knows all the best stories are the one's you've never (and never will be able to) read :)

Hardcover Morrison/Hughes Dare? I'd heard a rumour that this existed but dismissed it as I've never seen one for sale or heard of anyone who has seen one. Seems you get all the best obscurities down there in NZ!