While recently watching Captured By Ghosts, the documentary about noted comics writer Warren Ellis, I noticed two things keep cropping up, over and over again. One of them was that interviewees kept describing Ellis as kind and gentle, (which he took gleeful offense at), and the other was that everyone kept pointing out that his work was always all about the future.

And they’re both true – Ellis makes a great show of being a total curmudgeon and delights in the adolescent drive to shock, but any real analysis of his writings reveal that he is acutely empathetic and incredibly compassionate, while the vast majority of his work really is concerned with the future, and what it all holds for us.

His idea of the weird and wonderful future for mankind was most evident in his Transmetropolitan series, but it infuses almost everything else he writes. Even Planetary was all about paying tribute to the past and learning from history, but also, crucially, about moving on and doing something new with those lessons. And I can’t be the only one hoping for his evolution of Batman that appeared in the Planetary crossover, one who is more emotionally balanced than the Grim Avenger Of The Night, to become the default Bat.

After all, human beings have always been fascinated by the future, and often imagine the worst, and are constantly surprised when it doesn’t actually happen. Millions and millions of words have been written imagining the times to come, and some of them even come true.

We all know where we’ve been, but nobody really knows where we’re going, and this attraction towards this unknown is part of the human condition. And now it’s a whole new year, and it’s not just a good time to change the calendar, it’s the time to look forward to the year ahead, and hope for the best.

Society’s obsession with the future can be clearly seen in the way it treats its entertainment. Last week’s release is already old news, and creators of books, movies and TV shows spend most of their time in interviews answering the most obvious question - “What’s next?”.

It’s only human to wonder, and to ask this question. After all, we’ve always been this way.

I’ve always been this way.

The future comes in strange shapes, and objects that have been around for years can still signify the forthcoming, on a personal level.

For me, Uncanny X-Men #273 will always be a symbol of the future – it came out at a time when my X-obsession was at an all-time high, but also at a time when I was getting every issue four months after the States, until my mate Kyle found a proper comic book shop in Christchurch and came back with it.

This was during one of the X-Men’s periods of extreme change, but getting to see how the X-tinction Agenda all turned out was intoxicating – everything had changed in three short months, and it all felt slick and new in a way the copies down the local bookstore never would again. It was also a jam issue, which I always have a secret soft spot for, and had art by Jim Lee, John Byrne, Marc Silvestri, Michael Golden and Whilce Portacio, and it was the most modern thing I had ever seen in my entire life.

That comic is twenty-something years old now, but it still looks like the future to me. 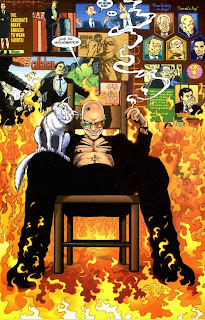 I’m always on the lookout for the next bit of the future, and sometimes I find it. I even still get a bit of a thrill every time I flick through a copy of Previews in the comic shop.

The delight of seeing the near-future is still there, even if it has been diluted by enormous disappointment over the years, as more and more solicited comics never live up to the promised wonder.

But there are often comics that look like something genuinely futuristic, even on the age-old medium of ink-on-paper. This is largely due to the talents of individual artists, as every now and then a new artist comes along who doesn’t look like anybody else, and it all reeks of the gorgeous funk of potentiality. 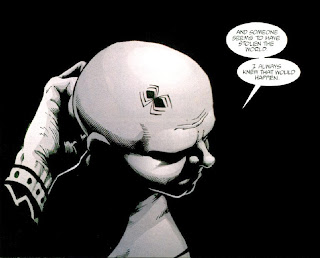 I don’t see as many signs of the future in television shows, which has often been a reactive medium and a far harder place to carve out an idiosyncratic style, but do see it in the work of filmmakers like David Lynch and Stanley Kubrick (The world is getting a little more Clockwork Orange every day).

But I'm constantly getting hooked on music that sounds like the future. I’m always interested in the sound of times-to-come, and have had various obsessions with various music acts who I’m convinced sound like the future. It all started with the pounding electronics of Vangelis’ scores for Blade Runner and Chariots of Fire, and I never quite got over it, convinced at various times that bands like the Chemical Brothers, The Beta Band, post-OK Computer Radiohead, and Asian Dub Foundation were the sound of the future.

I've never got over this, and even though I'm a sad old bastard who feels left behind by much modern music, this hunt for future sounds continues today, with a current childish infatuation with dubstep and the genre’s glorious need to annoy the shit out of the listener. 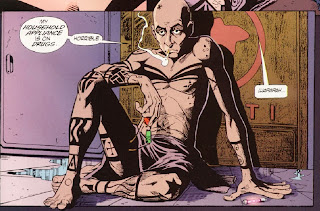 There is certainly some warm and cozy comfort to be found in nostalgia – I frequently wallow in my own past without guilt and regret. The past is what made us, and to ignore it is to ignore the fundamental aspects of your own being.

But as a species we’re inclined to look forward, not back. The only way we progress is through learning from our past mistakes, and going forward. The music we listen to and the comics we read are great big honking metaphors for the human need for novelty, for something new. This iw what Ellis is saying, over and over again, combining that compassion with the eye towards the future and coming out with a big bag full of pure hope.

And, despite the constant whinging about the lack of jetpacks and rocket cars, the future is all around us, with technological advances and sociological changes in the past few decades that are just staggering. Leonard Cohen might have reckoned the future is murder, but it's also full of hope and glory.

The future is unwritten, but, against all the odds, we’ve somehow made it to the year 2014. That’s a fact worth celebrating, because it’s a wonderful time to be alive, and we've got so much to look forward to.
Posted by Bob Temuka at 10:38 PM

Presumably you've read Pat Mill's Savage: Taking Liberties? I think it's one of the best things he's ever written, up there with V For Vendetta as one of the best stories in any medium about UK politics; I'm a bit surprised it doesn't get more attention considering it's got that great art by Charlie Adlard, who's gone on to become a comics superstar.