Twit of the Year

Somebody ended a conversation with me the other day by telling me to DM them on Twitter, and they were gone before I got the chance to point out that A) I don't know how to DM anybody because I'm a technology idiot, and B) I'm not on Twitter.

The first point is entirely my fault. I worked in IT in the nineties, which means my tech knowledge is woefully and uselessly out of date, and I have made little effort to keep up with things since. I just can't be arsed learning how to use Skype or any other modern technology miracle unless I really, really have to. I still use a computer every day, but I only learn what I need to make it do what I want. Technology hasn't quite passed me by, but I'm making little effort to keep up.

The second point, about not being on Twitter, did make me wonder why I didn't get a account and join in that conversation, and I really did think about setting one up, for a good 30 seconds, before I talked myself out of it.

I don't have anything against Twitter as a concept – it's a valuable source of information and communication, once you separate out the vast amounts of white noise. As a journalist, it's a brilliant source when big breaking news is going down, and an absolute nightmare when there is no clear information, just rumour.

And I do believe that increased communication is a good thing, because once everybody in the world starts talking to each other, it brings down political, cultural and social barriers. There are, of course, always plenty of people using communication to put up new walls, but how can you really invade a country that has people you follow on Twitter?

And it's obviously a great way to keep up with friends – we're all so scattered these days, tweets can be the only connection between us around this cold and lonely world.

But I just know that it would take me an hour and a half to say something inadvertently offensive, or tweet something unforgivably stupid. I know that my first reaction to anything should not – under any circumstances – be trusted, and if I start saying things publicly without putting any thought into it, I would rapidly be exposed as the total Guy Gardner I really am.

I know this would happen to me, because I've seen it happen with others, over and over again. 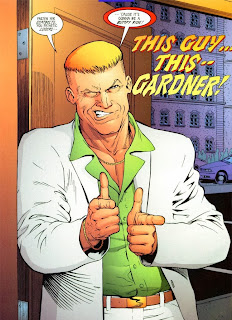 I started the Tearoom of Despair about half an hour after the golden age of comic book blogging finished, (another magnificent bit of awful timing on my part), and a lot of the writers who inspired me to get up on my own rickety soapbox had moved on from regular blogging. Many of them shifted their main public profile to Twitter, and many shut down their blogs altogether, reminding everybody they were still alive with regular, and even prolific, tweeting.

I used to read all their blogs, but I don't follow their twitter feeds, because I always prefer long and thoughtful reactions to art and culture. But some fine comic bloggers who used to write insightful and contemplative pieces on the medium are stuck in an endless round of sneering at #fuckingnerds and moaning about Joss Whedon.

I'm not saying they're wrong, I'm just saying that I preferred it when they rambled with their points, just like I like to ramble and if I started flicking off quickfire reactions to various things, you'd all see what a miserable old fuckwit I really am, and who wants to see that?

It's not just comics – some of my favourite political writers turned out to be temperamental, arrogant and judgmental douchebags when you got their instant reaction to something. Even those who weren't terrible people would make ill-judged tweets, or their messages would lose their tone in naked text. Things get misunderstood and never resolved. 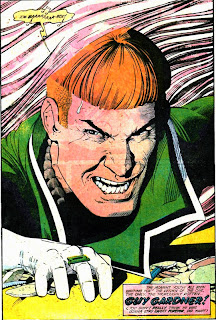 I'm obviously still a narcissistic little shit, because I've got this blog that's all about me me me. But I can take my time thinking about what I'm going to say, and I can pontificate at length, which is always a fuckin' laugh.

After all, I started writing this post a year ago, abandoned it, came back to it a few weeks ago, abandoned it again and then finished it off this morning. It was much more wimpy, and waffling, and there was a part where I directly insulted every comic creator ever, until I fixed it with a tiny bit of rewriting.

And I think the editing is what I would miss most if I set up @bobtemuka. I'm a professional news editor, so I'm quite good at cutting and reworking and pushing and pulling words and sentences and paragraphs into the proper shape. But I also have to tweet the odd thing for work, and I'm always nervous as shit about that, because I can't take it back if I get something wrong in there.

I'm convinced I'd regret most of the things I'd tweet within minutes of doing it, so why bother? I'm never 100% happy with these blog posts, and I often feel I've completely failed to make the point, and that's over a thousand words, how could I ever adequately explain myself in 144 characters? 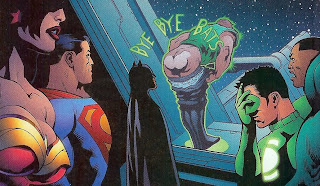 Technology has passed me by in a lot of ways already – work gave me an iPhone and it took me 12 months to figure out how to turn it on, and I'm always at least two years behind on the latest TV/computer/ music playing thingy.

But my twitterphobia isn't a tech thing – I can wrap myself around almost any technology if I really, really have to - it's a human being thing. I know I'm missing out on some vast conversation, and making contact with new friends, but it would also expose my inner jerk, and there is certainly enough of that already.
Posted by Bob Temuka at 3:14 PM

I've had a bit of a love/hate thing with the Twitter myself. I've seen a couple of people I considered "friends" join Twitter and then consistently make utter asses of themselves to the point where i didn't want to "follow" or "friend" them anymore. It's like it can unveil your inner arse self and some people just aren't suited for Twitter I think. I've had a "twit battle" or two myself and afterwards thought it felt like I'd magically regressed back to high school again. So I have a very conscious "do not engage the trolls" approach nowadays.

But all that said it's worth having an account just to keep up rather than take part- you can have a private account so nobody can follow you anyway and just be a "lurker" but it's much easier to keep track of everyone if you can actually follow them.