The Cartoon History of Everything

Will Eisner always used to say that you could teach anybody anything if you put the lesson in the form of a comic, and then he went on to prove it on an industrial scale with decades of P*S army maintenance comics.

If there wasn't such a prejudice against the form, every school textbook would be full of comics, because if you want something to stick in the mind, give it something visual to hang on to.

After all, nearly everything I know about history I learned from Larry Gonick. 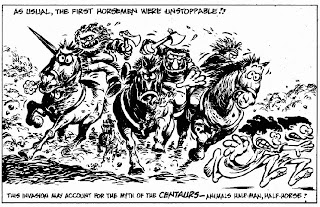 Gonick's books are both massively popular and criminally underrated. He has more than a million copies of his Cartoon Guides in print, but there is little real appreciation for his art and technique. His books make complex subjects more simple and easy to understand, but sometimes the books and the storytelling have to get complex in their own right.

He's actually created a wide variety of strips and books, but it's the Cartoon Guides and Histories that are his crowning achievement. He takes dry, dusty facts, and brings them to life with efficiency and humour, and he makes it all look so easy. 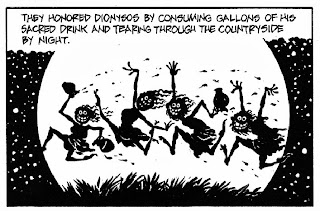 It's the humour that is the first thing to grab the attention, and makes a lot of Gonick's subjects so palatable. History is full of unpleasant people committing appalling acts, and even though I remain an eternal optimist, I have to concede the human race has been built on a foundation of blood and terror.

The Cartoon History Of The Universe books frequently feature scenes of genocide and massacre, as entire cities are put to the sword, their homes destroyed and the earth salted. It could all be a bit too grim, but Gonick lightens the apocalyptic mood with awful puns and visual gags.

There will frequently be a bystander commenting on the action, and pointing out the horrible absurdity of it all, defeating the reputations of the monstrous personalities who shaped our history. Every now and then the voice of reason will pop up and make history's greatest monsters look agreeably daft, especially with Gonick's talent for googly eyes and wide-mouthed astonishment, which is always funny.

Bringing this kind of humour into super-serious subjects like history doesn't diminish the lesson – it enhances it. Making fun of terrible deeds and terrible people is one of the best ways to beat them; there is a reason why cartoonist David Lowe was on Hitler's death list. 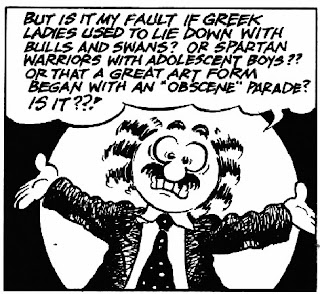 History is full of upsetting incidents, but the odd joke can help the details stick in the mind, which is awfully useful in Gonick's history books, because he has a lot of stuff to get through, and he hasn't got the space to dwell on matters before moving onto a new subject, often on the other side of the world.

There is an efficiency in Gonick's books that is just staggering – he packs in centuries of incident from around the world in a couple of hundred pages. A powerful civilisation that ruled the known world for decades can be dealt with in a matter of pages, and judicious use of footnotes allow Gonick to take short side trips along the alleys of history. He only has three or four panels in these footnotes to look at some issue, but you can tell almost any story in the world in three or four panels, if you cut it right down to the bone.

Some of those notes are ridiculously clever, and the way Gonick puts his story together is often quietly impressive. His solutions for age-old problems like the depiction of Mohammed are deceptively simple, and his ability to boil a complex and convoluted  series of events down to the pertinent details is sensational, especially when he doesn't lose that twinkle of dry humour when he's rushing to the point.

These Cartoon History books have to be efficient, because there is so much to get through. But this is just another appealing aspect of the books – they don't just tell the story of the Great Powers of the Western World. They spend a lot of time in Latin America and Africa and Asia, well away from the concerns of white men (who usually come crashing into the narrative at some point).

Some English kings barely rate a mention, while the rise and fall of Mayan culture is thoroughly examined. This multicultural approach to history, and the way it tells the big story of how all the world's different cultures and civilisations have smashed into each other, means the books are constantly enlightening.

Gonick always wears his own innate prejudices on his sleeve, often passing judgement on characters, making them look ridiculous and psychopathic. No reading of history is every going to be purely objective, because the author is a constant presence, but he's always up front about it.

Besides, there was never any chance of it ever being objective, once Gonick decided to tell this story as a comic book. 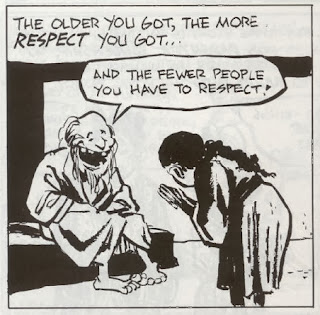 Because art is never, ever objective. It's always told from somebody's perspective - that's the big difference between art and all the other beautiful things in life that are just chaotic nature.

Gonick uses his art to tell the story, and that inevitably prejudices the tale, so he doesn't bother pretending to be objective, giving it all up in the name of his shaky, lively art style.

Which is absolutely fine. It all gets a bit goofy sometimes, but can also be oddly epic, as legendary characters from history launch themselves into bold endevour. Gonick's characters are always jiving around the panel, bringing history to life with their hysterical eagerness, and sometimes the big battle scenes are actually bloody impressive, and sometimes he captures the aftermath of some big battle, and his effortless line blurs out, unwilling to dwell on the horror.

History isn't just facts and figures, it's people doing crazy shit to other people, all the way down the centuries, and there is plenty of crazy shit in Gonick's art, so it all matches up nicely. 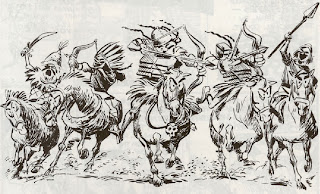 And all that humour, efficiency, cleverness and groovy art make Gonick's books pretty damn charming. They're so good, I almost bought the Cartoon Guide To Statistics at a comic convention the other week, until sanity prevailed and  realised I was about to buy a textbook.

He completed The History of the Universe a couple of years ago, but there is still plenty of history to come (there's that eternal optimism again), and plenty of other historical and educational avenues for Gonick to take. Why aren't all school textbooks full of comics, when the lessons can be this much fun?
Posted by Bob Temuka at 2:03 PM