What if we're living in an Elseworld?

I met a new workmate the other day, and even though I had never met her before, I got to tell her that she'd had a profound impact on my life, because of a recommendation she made to somebody ten years ago.

Back in 2003, she suggested that my wife might like a particular journalism class at the other end of the country, and that's where I met her, and if my new workmate had not mentioned the Timaru course, I would not be working where I am, and I wouldn't be living in this city, and I might never even have met the love of my life.

I wonder about this a lot. What if that tiny recommendation hadn’t been made? Where would I be? How unlikely is it that I ended up where I did? How different could things be?

I've always wondered about this a lot. Suppose that car that just missed me when I was eight had actually connected. Imagine if I hadn't mean those split second decisions to quit that job, or leave that town.

Bloody hell, no wonder I always like What If and Elseworlds comics. 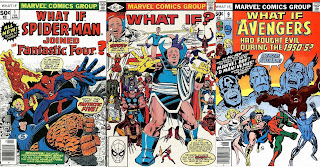 Marvel keeps bringing back What If...?, and I always have a sneaky fondness for them when it does. I like the way that anything goes in a non-continuity superhero comic. Anybody – even the bravest and mightiest of heroes – could fall, and plot twists could turn inside themselves when the story didn't have to connect with the regular series.

And while they depended on some point of continuity to bounce off, the stories in Marvel's various What If...? comics are usually complete in one go, with massive amounts of info-dumping, and some kind of resolution. A lot of What If comics are inane and lazily executed, but some of them shows sparks of life.

Some of the earliest examples, from the mid-seventies, are fascinating in the way they divert from then-current continuity, especially when those contemporary events are now old history, with a regular 1970s comic continuity that is now almost as unfamiliar as the alternate universe tales. 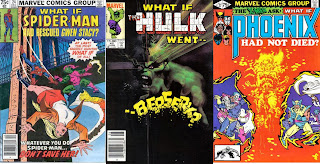 The first 47-issue run of What If? ran out of steam surprisingly quickly – after covering the most obvious questions, swapping the Fantastic Four's powers or having Spider-Man's radioactive spider bite somebody else – and the comics were soon asking what would happen if Nick Fury was Nick Fury IN SPACE, or what would happen if Character X was a villain/hero instead of a hero/villain.

One pleasant side effect of all this was that a lot of the What If comics didn't have to take themselves that seriously – within the first year the comic asked What If The Original Marvel Bullpen Had Become The Fantastic Four - and eventually there was an entire issue devoted to humour. This was usually greeted with a “Heh. Funny. Don't do it again” reaction from readers, but it gave the comic a lighter tone that it desperately needed, especially when a lot of the other stories went crazy with the tragedy.

It's also funny how many of the original questions have now actually happened in the regular Marvel universe – Phoenix and Elektra both lived and Spider-Man's clone wasn't destroyed in a chimney, but, sadly, most of the original run is actually pretty mediocre, as most of the creators take on their stories with a shrug, because they didn't matter. Not really. 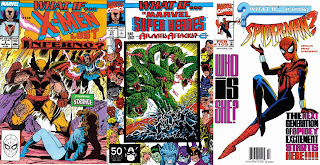 There were a lot more painfully average in the next major run of What If stories, which kicked off in the very late eighties and – surprisingly- lasted more than twice as long as the original, right through the nineties. Some of the latter issues are particularly mediocre, but there were also odd glimpses of quality, including solid work from Jim Valentino and Kurt Busiek, glimpses of greatness with writers like Joe Kelly and Dan Slott doing some of their first stories, and a genuine success with DeFalco and Frenz's Spider-Girl issue eventually spawning a whole new universe of tales.

This series was published during the age of the crossover, and at a time when Marvel was publishing dozens and dozens of titles every month, so it never ran short of questions to ask, but it still turned into a typically ugly Marvel nineties comic, which is hard to find any real affection for.

Marvel keeps putting out new What Ifs every now and again, usually based on a recent crossover, and the formula is still basically the same. The interesting thing about all What If...? comics is that they are free from bowing to continuity-imposed pressures, but still operate within the strict parameters of the Marvel Universe: you wouldn't get Spider-Man flipping out and killing Aunt May, or Captain America acting like a coward. 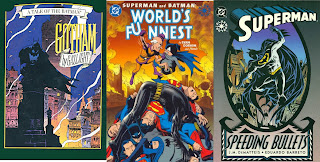 DC's Elseworlds are a different beast altogether, because literally anything could happen, as long as the proper iconography was in lace. Superman could be a homicidal fuckwit, and Batman could be an incompetent boob.

The Elseworlds grew from a long tradition of DC's imagery stories, which almost uniquely centred on Superman and veered more closely to Marvel formula, asking questions like What if Superman married Lois Lane, or What if Superman split into two creatures, or What if Lex Luthor wasn't such a dickhead? (All of which, again, came to pass in the regular world.)

DC was more focused on creating a coherent single universe when Marvel was doing its What If thing, but after the massive success of The Dark Knight Returns and the more modest popularity of Gotham By Gaslight, DC realised that stories set outside the strict and increasingly complex single continuity could also be worthwhile.

It didn't take long for DC to run the concept into the ground, eventually devoting an entire annual line to Elseworlds stories, which was so average that it soured the whole thing. 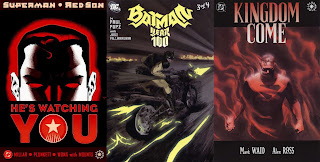 But the great thing about Elseworld comics is that they gave all the power to the creators to create a new world, as long as they used the right names and symbols, and this resulted in some excellent comics.

There were plenty of pretty good What If stories, but no real great ones (although Frank Miler's Elektra story came close, because it gave Matt Murdock the well-deserved happy ending that he never got), but some Elseworld's are genuinely terrific. Paul Pope's Batman Year 100 has more thrills, chills and excitement than the previous ten years of regular Bat-comics, Millar's wild inventiveness and blatant sentimentality made Superman: Red Son far more palatable than the fairly crass premise promised and Kingdom Come had a massive impact on the way superhero stories would be told for the next decade.

Even DC's biggest success stories of the eighties - The Dark Knight Returns and Watchmen - were Elseworlds before somebody came up with that catchy title, especially if you can't help comparing the Watchmen chacracters to their Charlton counterparts. There is real worth in these imagainer stories, which are just a bit more imaginative than most. 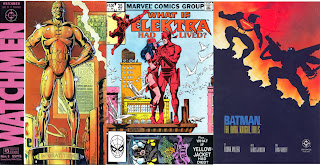 There is still some small part of me that is convinced that there are alternate worlds out there, just one Flash-vibration away. Worlds where my grandparents never even meet, or where I never left my home town.

It's both unsettling, because it raises questions about free will and a lack of uniqueness in this cold, cold multiverse, and reassuring, because there is usually a world where it works out okay.

My favourite What If and Elseworld comics are the ones where it all works out okay. The shock death of a beloved character is an easy way to grab attention, and a bleak everybody-dies-and-the-world-ends can sometimes be powerful, but imaginary stories like this can have happy endings too, and I'm just a sucker for happy endings, especially when these characters never get to rest. They could use it.
Posted by Bob Temuka at 10:25 PM

Just found a What If? on ebay that intrigued me: What If Conan was stranded in the 20th Century? Painted cover of Conan brandishing a gun, I really want to read this one, have you read it?

I've always wanted to read that one too although I suspect the execution isn't as good as the idea. However if you want to read a fun take on that idea, check out Frank Miller's first Sin City story, his character Marv is basically meant to be a modern day Conan

Love the classic What If stories, even when it ran out of steam, although the 2nd series definitely got very '90s very quickly (too many What If writers seem to automatically go for the "AND THEN THEY ALL DIED" shock ending). I wish it was still around but the occasional rebirths of the topic have just been pretty dire all around "WHAT IF IRON MAN LOST CIVIL WAR/ WHAT IF ACTUALLY CARED"?

Matt: I have read that one, and one of the disappointing things about the last few issues of volume one is that they have these beautiful Bill Sienkiewicz covers, but the insides are usually pretty mediocre.

I've been reading & enjoying the blog since I came across a link a couple days ago, so I'm obviously a bit late to the party. That said, here's a link to that Conan What If in case the author or comment makers have not read it yet.http://bronzeageofblogs.blogspot.com/2014/06/what-if-conan-walked-earth-today.html

The blog linked has a hefty variety of other comics to browse through and read if one hasn't found it yet and already done so. Hope its found to be enjoyable

'Find it" I meant... Also wanted to mention that I share your view on reading digital and think think part of what can make comics of quality comes from physically turning the page to say the least... but theres some things that are either too costly due to their scarcity or near impossible to find for the same reason; digital scans can let a person enjoy something they otherwise may never have the opportunity to experience.
apologies for the rambling, it always happens when I feel the need to actually comment on something I read