Love and Rockets: 'They got it under control'


Why is Love And Rockets still the best comic in the world, even after all these years and all these stories?

Because it just obviously IS the best comic in the world. That’s why. Anybody can see that.

* Because it's still funnier, smarter and more emotionally rich than anything else out there

I only bought Love and Rockets New Stories #6 - the latest annual offering- a couple of days ago, and I've already read it half a dozen times, and it's as good as it ever was.

It's always as good as it ever was. The comics that the Hernandez brothers are producing these days are just as strong as anything they’ve done in the past three decades, and it’s still incredible to see how much life and passion their stories still contain.

The day the new Love and Rockets comes out is always a good day, and when it only comes out once a year, it's a very, very good day.

After marching to the beat of their own drum since the early eighties, the level of high craft the brothers use to tell their stories is still breath-taking.

All of the comics in New Stories #6 have strict rectangular panel layouts, but their storytelling is effortlessly complex – Jaime cuts all the fat from his plots and zeroes in on pivotal moments in a story that covers a surprisingly large amount of time in two-page bursts, while Gilbert continues to slide around in time and space, filling in back-stories and answering old questions with a minimum of real fuss.

They also have a fantastic sense of pacing, as the stories build to unexpected resolutions, but the sublime simplicity of their tales is often masked in easy-flowing panels, attractive characters and flagrant disregard for standard beats and twists. Some individual pages are brilliant – Jaime has one character tell an embarrassingly open story about school uniforms, with the speaker adrift and vulnerable in blank white spaces, before opening up to the reactions to her story from the other people in the room, which ranges from smug amusement to outright bafflement, and you can tell what everybody in the room is thinking at the same time, and it's a beautiful and silent cacophony.

(Plus he does that thing with the same static shot repeated over and over again, with just the dialogue, the expressions on the character's faces and their body language changing in each panel and it still works every time.) 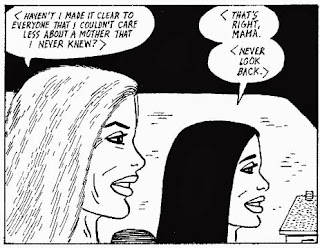 * Because there is a sense of history that never overwhelms anything

Another side-effect of decades of distinctive and original comics is that both writers continue to play off their own continuity in new ways, checking in on beloved characters and taking their story forward.

Beto's stories are always full of ghosts - sometimes literally – and the latest issue sees the new generation becoming obsessed with the old, and the line of righteous fury and big tits between Maria and Killer. A snippet of film featuring Maria opens new doors as movie comments on life which comments on movies (a recurring theme in Beto's recent work).

There is also more time spent in Palomar, and after the last issue's need to fill expectations for new stories somewhere south of the border, the appearance of the town and its beloved characters in this issue is more organic and natural.

Meanwhile, over in the world of Locas, Jaime is making a conscious effort to steer away from the easy beats, built up by years of fine stories, that his long-suffering characters bring to each story, and has introduced a slew of new characters in his new stories. There is no Maggie, or Hopey, or Ray, or Doyle, or Izzy, but after the latest issue, I'm just as interested in Ishmael's story, and where it is going.

There is still pay-off from the past with the resumption of a wrestling match left hanging years ago, but it's notable that it's Angel and Vivian, two characters who have only been around for less than a decade, who provide that glow.

And there is a whole new lot of young punks, about three generations below the characters we've been following for decades. Cute punk chix, (including one nameless girl who appears to be the impossible lovechild of Terry and Hopey) and dopey skateboarders, successors to legacies they don't know anything about. 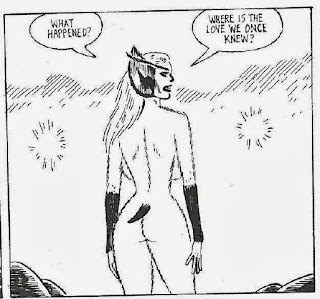 * Because they can do what they want

Jamie can create a whole new family dynamic if he wants, and Gilbert can still do some crazy shit about furry monster women sucking out the soul of a dude with a Prince Valiant haircut, if he wants to.

It’s their hot comic, they can do what they want. 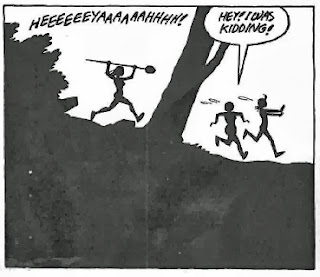 * Because it comes in huge chunks of brilliance

The hardest part about the annual format that Love and Rockets has been published in for the past six years is the long, long wait between issues, but it also means there is a huge dump of brilliant comics, all at once, and it can literally be stunning.

And across dozens and dozens of new Hernandez brothers' stories, there is that craft again, married up with the endless experimentation. The longer format that comes with annual release has allowed them to tell huge, sprawling stories, but New Stories #6 is deliberately choppy, with 25 individually titled stories. Most of them are variations on the longer story arcs, but there is a pleasant efficiency to all these short stories.

This is nothing new - it took a third reading of Human Diastrophism before I really figured out what was happening at the end there - but I still love the way the endings to the Hernandez Brothers' stories usually leave me slightly baffled, and can often take some time to work out.

I still can't tell whether the brief moment when Maria sees her daughter and granddaughters on the street is a happy or sad ending – Maria remains enigmatic to the end.

And it also took me an embrassingly long time to work out what the big deal was with the Black Widow song. 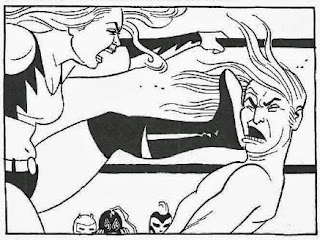 * Because it's still got some rasslin'.

And while it's a neat call-back to the greater Locas world, and the only (background) part that Maggie plays in the latest set of stories, seeing Angel in action in the squared circle was magnificent, because nobody draws some fun rasslin' like Jaime does.

And you gotta love the way Tonta's hair pokes out of the holes in her luchador mask. 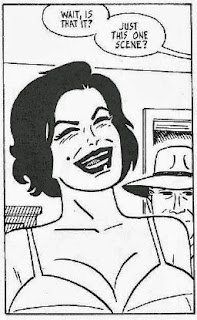 * Because it's funny as hell sometimes

Anything with the lovely Angel is hilarious, especially the last panels on the Crestfallen Angel pages and her reunion with Vivian, and her first appearance at the wrestling was the funniest damn thing I've read in a new comic in ages.

Beto's crazy shit stories are also still funny, with the usual biting punchline, and there are still laffs in Killer's Sad Girl stories, nestled between anicent family betrayls and losses.

These can be big stories, dealing with big important themes, but they're also funny books..

* Because it is the best

But mainly, Love and Rockets is the best comic in the world because it's the most entertaining, thoughtful and stylish comic produced in the past three decades, and a long line of brilliance continues with New Stories #6.

Same as it ever was.