Many of the great modern comic creators rightfully cite Harvey Kurtzman's Mad comics as a major influence. That uncompromisingly anarchic humour, the refusal to bend to any authority figures (or good taste) and the crazy, flowing storytelling has all had a major impact over both mainstream and alternative comics for decades.

But I was far too young for all that. I came to the original Mad comics relatively late in life, and while I certainly appreciate that stuff, my own particular fondness for Mad comics was formed far earlier. 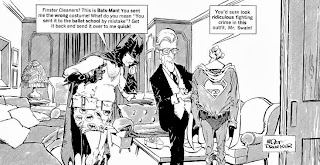 Many comic readers go through a Mad magazine phase, and there is certainly nothing wrong with that. It's a comic that is perfectly primed for a specific age group – somewhere between 10 and the proper teenage years  - and it's stuck to the same winning formula for decades.

Each issue of Mad was always packed with dozens and dozens and dozens of jokes, with crazy, stylish and accessible art. It made fun of Mom and Dad and teachers and celebrities and advertisements and general human stupidity, and had an absolute icon in Alfred E Neuman. There were terrific movie piss-takes and a generally immature sense of humour which still manages to get the laughs.

I didn't reach that age group until the late eighties, and while many would argue that the comic was well past its prime – it had certainly seen a decline in sales since its heydays in the seventies, when readership topped two million – I still thought it was the funniest frickin' thing around.

Like all good twelve year olds, I laughed and groaned and laughed some more at all the gags the usual gang of idiots came up with, mesmerised by spoofs of the latest Batman and Star Trek films and digging on the short one-page, or even one-panel, jokes, and enjoying many of the endless puns and relentless sight gags.

I could barely tell the difference between Kirby and Ditko at that age, but there were some Mad artists who were my definite favourites. And while the jokes could be maddeningly hit and miss, you could always count on the quality of the best, and three artists in particular. 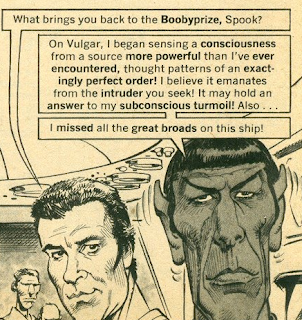 The movie and TV satires were one of my favourite things in every issue, and it wasn't for the gags crammed into the top of every panel – it was the wonderful caricatures.

Mad had a fairly regular crew for the satires, and there were some really strong work from Angelo Torres and Jack Davis, whose art came with loads of messy charm, but there is no doubt that Mort Drucker is the king of the piss-take caricature.

Drucker's subjects are often surprisingly pleased with his efforts, probably because he would exaggerate the chin or nose or some other prominent feature, but never amplify things to the point of absurdity, so that his Harrison Ford or Tom Hanks or James Cann were still strikingly handsome, even when comically overstated.

He could rip off the iconic pose from any movie poster in the world and give it a goofy spin, but Drucker has also been brilliant in panel-to-panel comics – his figures had real life, wriggling and jiggling through panels, and diving into the action with hysterical glee.

But the real humour was often in the deadpan expressions, with Drucker giving all the characters straight faces as they dealt with absolute absurdity, spitting out dorky jokes with barely a hint of actual emotion. Sometimes the scripts were full of cliché and banality, but those Drucker deadpans were always, always funny. 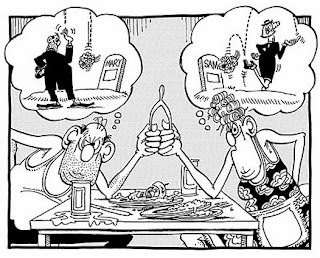 I would savour the satires, and they would often be the last thing I read in an issue, because I always like to save something meaty to finish on. But the first thing I would always read in a new issue of Mad would be the Don Martin cartoons.

Martin's stuff was always ridiculously popular, and he's somehow still a totally underrated artist, with his wide open style looking deceptively primitive. As a kid, it was bloody easy to copy his style, with those vast, hooking noses, hinged feet and drooping eyes, and this accessibility made Martin's work incredibly readable, and you could gloss through a Don Martin funny in seconds.

He also had a fairly black sense of humour beneath that simple style, and when it got gross, it got really gross – he could do things with bodily fluids that were disturbingly sticky, and when his characters slammed into something, there was a disturbing dampness about it all as figures crumpled into a wet, bloody mess.

His figures would bend around to the point of absolute absurdity and bolt along the page with reckless speed, and it was all so pleasant to look at, and this malleability meant his work was always worth stopping to check out, on that first flick-through.

And then there was Sergio Aragones, and if I have to tell you how brilliant Sergio Aragones is, you're in the wrong place, brother. Groo is one of the great works in modern literature, Aragones' painfully rare autobiographical comics are the main reason comics were invented, and the amount of work he did for Mad over the years has always been incredibly impressive.

Mad always lived by the rule that if you threw enough crap jokes at the wall, one or two might stick, and Aragones is the personification of that, filling up the margins with tiny comics, and doing two-page spreads with dozens and dozens of figures. The margin comics always raised a wry smile, were sometime laugh out loud funny, and – ever now and again – insanely clever, as Aragones bent the art around the corner of the page and got another joke out of that infinitesimal space.

Aragones made sure every kid parting with his hard-earned cash felt like they got their money's worth, in both quantity and quality. 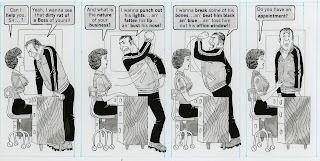 There were other great talents that stuck with Mad over the years – If Martin's work could be gross, Al Jaffee's was often genuinely grotesque, while Dave Berg's dad-jokes barely raised a groan, but his graceful linework, particularly on the characters starring in his strips, made them eminently readable; and Antonio Prohías' Spy v Spy was always worth a look for its sheer inventiveness, even if it rarely got an actual chuckle out of you.

You grow out of Mad after a while, but there is always a new generation of young kids. Mad is still going, and while I'm now decades past the target demographic and haven't read an issue in many years, I hope there are still some young punks out there, grooving on the latest generation of the usual gang of idiots.
Posted by Bob Temuka at 4:57 PM

One of my great pleasures was seeing Peter dive into a huge pile of old '70s and '80s Mads we have out at the bach and loving every page of them. Fatherhood goal unlocked!