'There are a lot of me here'

One of my favourite cheesy quotes – and I have no idea where I first heard it – is that you might, as a person, be one in a million, but that just means there are hundreds of you on the internet.

I run into myself all the time, at gigs and screenings and comic shops and online. It's always quite startling, although ultimately comfortable. 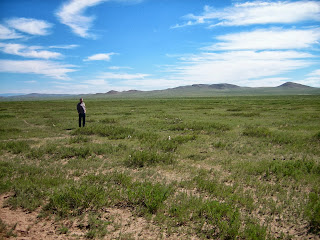 I'm a white male in my late thirties, married and living in an English-speaking country. My politics are a libertarian-socialist-anarchist-compassionate mix, and I'm an extreme pacifist who still likes incredibly violent fiction.

Rugby is my sport, journalism is my work and comics are my favourite entertainment, although I'm also passionate about good movies, TV, novels, music and theatre (and probably in that order).

All this doesn't exactly make me a beautiful and unique snowflake. I'm always running into people who have a scarily similar worldview, especially on the internet, where we can all take the time to sound smarter than we really are.

But even though I live in a country with a relatively sparse population, I also run into myself all the time in real life. It's hard to feel unique when you're in a crowd of people who look just like you. 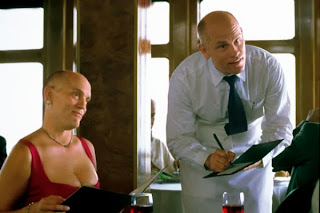 The most extreme example is recent memory was an Urge Overkill gig, where I got a bit drunk and became convinced that I'd travelled into my own head, Being John Malkovich-style. (Either that, or I'd turned into the John Simm Master when he turned the whole world into himself.)

More than 90 per cent of the crowd were blokes who were my age (estimate independently verified). They were all into Urge Overkill from long before Pulp Fiction, and had all gone out on a wet Tuesday night to grab a handful of the past, for a little while at least.

We were all very well behaved, and reasonably well-dressed, and we danced politely, and we were all quite impressed by Nash Kato's ridiculously freaky guitar playing.

There some women, some young dudes and a couple of old crusties there, but the vast majority were males of a very specific age. Interestingly, it's not a race thing – there were Japanese and Maori and Indian versions of me, with the same tastes and interests. Race is no barrier to dorkitude. 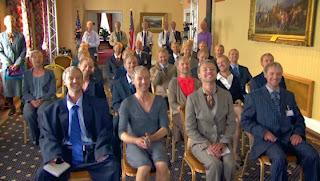 And there I fucking am again, at the screening of Suspiria that Goblin were playing at. Lots of me, even if the ages skewed a bit younger, and more of them convinced their girlfirends and partners to come along, but it was the same sort of film dork, heavy into intense Italian blood and gore. (Notably, the more likely it is that I'll be in a crowd of me, the less likely the lovely wife will be coming along.)

It was a fucking great movie experience – even if I'm convinced I ended up genuinely cursed by the cinematic witches, because the following weekend turned into one of the shittiest of my life – but I was genuinely thrilled by the screening, and had a big old goofy grin walking out of the theatre.

And they all had that same goofy grin, and I saw it everywhere in the theatre lobby and I didn't feel so unique in the world. I was just another dork, in a crowd of them.

But it was also weirdly reassuring, sharing that experience with a theatre full of people who were digging it as much as I did. There really was a sense of community there. I really did get a sense that I belonged there, among the same film lovers.

I'm wearing the same tee shirt as that guy in the comic shop, and that dude at the Manic Street Preachers show has the exact same hairstyle as me. I'm surrounded by me at the The Thing/American Werewolf In London double feature at the Queen St cinema, and while I'm pleased to see the huge young female following that has entered Doctor Who fandom, there is still a significant minority of aging fans just like me at the four-Doctors convention earlier this year 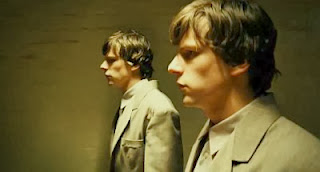 I do find the classic doppelganger concept deeply creepy. The idea of an exact double who invades your life and usurps it, so that your own loved ones don't know the difference, is the stuff of primal nightmares. I was always freaked out when I read articles about real life historic cases in The Unexplained, and I'm already a bit freaked out by the trailer alone for Richard Ayode's new double film.

But all these guys I see at all these places might share my exact tastes, but they've got their own mix in there, and there are all sorts of subtle differences. Different passions, different lives, different everything.

They remind me of me so fucking much, but they're not total doppelgangers. And we're all sharing the love, so there is no real harm done. 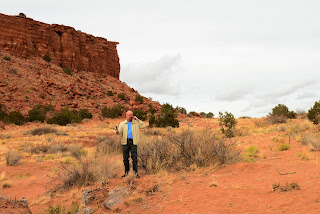 Some of my mates are into a lot of the same crap I am, but a lot of my best friends are also genuinely disinterested in things I love - some of them wouldn't read a comic if I paid them, and others genuinely (and wrongly) think Doctor Who is the worst programme ever. But we also share interests in other things, like horror films, or a particular sport, or favourite bands.

And while it is weird to be in a crowd of people who are just like me, almost everybody is just like me in some small tiny way. I sometimes hear something uncannily similar to my own worldview coming out of the mouths of people who I thought I had nothing in common with, and you can forge connections with complete strangers over shared affection for a TV show. There are half a dozen people at my work who have almost nothing in common, other than a fierce love of Breaking Bad, and for the past few weeks we're talking about nothing else after a new episode has come out, and then is a real connection there, made across social and cultural boundaries.

There are an awful lot of me out there, people who wear the same clothes and have the same interests and same opinions. But I also see the same things in nearly everybody, and no matter how less unique that makes me feel, it lets me know that I'm never, ever alone. We're never, ever alone.
Posted by Bob Temuka at 10:29 PM