Writing strong analysis about a specific comic work or creator is a tough task – the cultural baggage behind deep thinking about the medium means there is a fine line between pointless patronising and genuine insight.

The afterword in Gilbert Hernandez's lovely Marble Season book was an unfortunate example of the former, an essay with the noblest of intentions that ended up patting the reader on the head and patiently explaining out that it’s okay to like a comic book about kids getting up to mischief, because there are important and serious themes behind all the play, so don't be embarrassed.

Fortunately, the majority of the Dan Clowes Reader features examples of the latter, as the work of one of comic's greatest creative treasures is happily unpicked and examined, with no shame, and real insight. 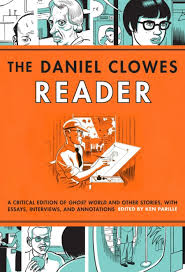 The Dan Clowes Reader is a collection of essays, annotations, interviews and examples of Clowes’ comic work, including a complete reprint of Ghost World and several other un-reprinted Clowes comics, edited by Ken Parille and recently published by Fantagraphics.

It's a good looking book, well designed and lavishly illustrated with comic brilliance.

Clowes is, of course, the perfect subject for a book like this, with a huge body of outstanding work produced over the past couple of decades. His deceptively simple cartooning style masks the depth of his stories, which always feel real and honest. His dry wit is often mistaken for melancholia, and his comics are often laugh-out-loud funny, but they can also be tragic and sad. His best work often leaves the reader adrift in a sea of conflicting emotions, and that is in no way a complaint.

Each new Clowes book is a cause for celebration, and is eagerly devoured by any comic fan with a modicum of taste, and they remain rewarding for years to come. Even years after I've first read a Clowes comic, I can find new jokes, new perspectives and even new themes emerge from the work, sitting all along in plain sight.

The most obvious benefit of the Dan Clowes Reader is that it points out all the little tricks the reader may have missed, with Ghost World given a thorough examination in a number of illuminating essays and extensive annotations, pointing out every reference or in-joke. Sometimes the annotations can get a bit too extensive, with valuable space spent explaining totally obscure figures like Homer Simpson and Ronald Reagan, and fairly dull reprints of fanzines and other ephemera that have passing mentions in Ghost World, but they are generally more rewarding than not, especially when it's revealed how many of the strangest events in Clowes’ comics are directly influenced by real events in his life.

Some of Clowes comics are oddly ill-suited to this kind of analysis. The artist reached his first major creative peaks in the nineties – the most ironic period in human history – and Clowes himself has pointed out the dangers of over-thinking his work, with the artist vigorously defending any charges of pretension, refusing to call his works graphic novels and referring to himself as a cartoonist.

But there is still so much depth and pure humanity in his comics, even in those stories he obviously dashed off for a laugh, that it’s not that hard to find extra meaning in the shortest and most incidental of his works. 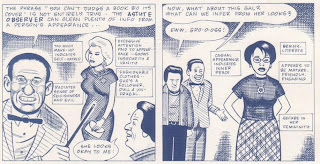 The Ghost World reprint and accompanying analysis make up half of the Dan Clowes Reader, with two other sections on “Short stories , Boys and (Post)adolescence” and “Comics, Artists and Audiences”. These two sections are a little more unfocused than the in-depth detail of the Ghost World stuff, bouncing around between the years and only touching on some of the superb comics Clowes has produced over the past two decades.

But Parille makes some fine choices in putting together some of the short comics in these sections, showing the vast versatility of Clowes’ stuff. Some of his funniest and most nakedly honest comics are in there, including ‘Ugly Girls’ and ‘Just Another Day’, (which is one of my personal favourite Clowes cartoons, and might be the first Clowes comic I ever actually read).

There is some examination of his other substantial works, such as Like A Velvet Glove Cast in Iron, The Death Ray and Wilson, but covering all these comics in the depth they deserve would create an unwieldy book, and you can’t blame the editor for mainly sticking to the shorter stuff. 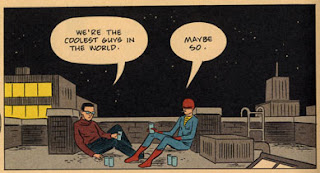 After all, there is plenty to pick apart in the shortest of Clowes’ comic. An entire movie was spun out of the four-page ‘Art School Confidential’, the Rodger Young stories are dense slices of semi-autobiography and ‘Black Nylon’ says more about the absurdity of super-heroes in six-and-a-half pages than DC or Marvel manage in a year’s worth of publishing.

While the back cover blurb is excited about the fact that most of the short stories have never been reprinted, they will still be familiar to most of Clowes’ fans, but, once again, they are picked apart, examined and annotated to an almost exhausting degree. I certainly had no idea of the fascinating connection between Black Nylon and  Edwin S Shneidman’s ‘The Make A Picture Story Method’ until the Reader pointed it out, and there are dozens of other little examples of the story behind the story. 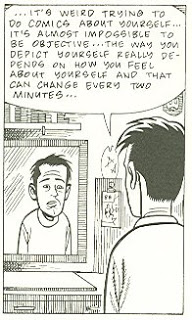 There are still times when the analysis gets a bit too far up its own ass in the final two sections, but most of it is still highly readable.  It still isn't the easiest book to digest in one sitting, getting that far inside any creators head can get a bit claustrophobic, but it is an ideal book to browse through at leisure, an essay or interview at a time.

This kind of thought doesn't come cheap, and I have to admit, I only got the book because it was essentially free due to a retailer discount card scheme. It cost sixty bucks in this part of the world, but I'm glad I used that discount on this book, even if its full of stuff I already own, (all right-thinking comic readers have Ghost World already).

Because it's always nice to see this amount of thought go into this kind of work, and strong analysis of a great funny book can be just as rewarding as the comic itself.
Posted by Bob Temuka at 11:00 PM