My life on the Never Ending Board


A couple of days ago I was mucking about on the internet, indulging in meaningless nostalgia, when I stumbled across a piece of fiction I wrote back in 1997.  That's right in the middle of my fan fiction phase and it was exactly as terrible as you would imagine.

But it was still fascinating, especially when I couldn't remember writing that particular bit of fiction. It was completely missing from my memories of those days, so I got to read a short story that I'd essentially written to myself, 16 years removed.

It wasn't all bad – I made myself laugh at a Prisoner in-joke. (I was 22 in 1997. Of course there was a Prisoner in-joke). And it basically made sense. But the writing was overheated and breathless, and trying so hard to be really, really clever, and it's definitely the work of somebody with some serious self-worth issues, which may still be lingering. Which is a little troubling.

But even though I'm too embarrassed to even search for all the other stuff I did at the time – which I'm fairly sure is still on the internet somewhere - I don't regret my fan fiction days at all.

There is no shame here. 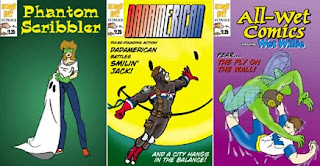 There are four million people in New Zealand, but we all live on the arse end of the world, so there is bound to be feelings of isolation. I've talked before about how the internet changed everything, and made me feel like I was part of a greater community. I ended up gravitating towards the Comic Book Resources message boards, in the days when it was clad in sickly purple and yellow word balloons, and that was my first home on the web.

It didn't take me long to realise that all the cool kids were writing their own stuff in one particular section of CBR that was devoted to fan fiction, and that looked like a hell of a lot of fun, so I started doing my own stories and putting them out there in the world.

They weren't strictly fan fiction – they weren't stories devoted to Batman or Doc Savage or anything like that. The setting for all these stories was a multi-universal street that ran forever, and that just meant any character from any comic or movie or TV show or novel or song could pop in for an appearance, but the vast majority of stories that sprouted up on CBR's Never Ending Board featured the writer's own creations.

There was the Dadamerican, and Buried Alien, and Joe Grendel, and the Mighty Hank, and Wet Willie, and Merlin & Cowman, and the Scarlet Dragon, and Wheat Lad, and Goldenager, and Rydgen, and Hatman, and Sharpshooter & Snow Sabre, and Paper Bag Boy, and OzBayt, and the Phantom Scribbler, and the White Knight, and Amyzon, and Typo Lad, and literally hundreds of other characters, long before I even started writing things.

The stories had only been running a few months by the time I joined in, and there were already recognisable cliques amongst posters, but the other writers - who were often indistinguishable from the characters they created - were incredibly welcoming, and I ended up writing a couple of dozen stories featuring my own creations, and it was marvellous.

I've still got a few stories I did from those days saved on my hard drive, in dusty old computer folders that haven't been opened since 2006. And there are a few that are still floating around on the web, (usually on sites that still have big, flashy nineties ads on them), but I don't think I could bear looking for them.

Because, despite the fantastic encouragement I got at the time, they really are unobjectively terrible – the first fumbling efforts at proper writing, all spat out for the world to see. The last few times I ever looked at that work, I cringed like a motherfucker. They're impossibly clumsy, and the two major influences on my writing at that time were – by some way – the Invisibles and the Doctor Who New Adventures, which were both pretty goddamn self-indulgent, so it wasn't pretty when I added my own ego to the mix.

When I do stumble across something that I wrote back then, I do see glimpses of what I was going for, but I generally failed to pay it off. Sometimes I got it right – I was so pleased with one action sequence involving a moving car and a hatchet that I have used it several times since - but in general, it's mostly rubbish. 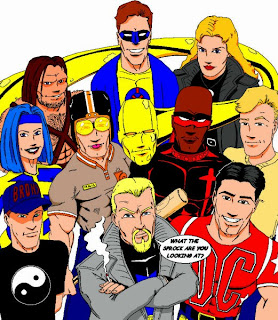 But I don't regret spending all that time thinking and writing about those silly little stories. Most of the feedback that was produced was unhelpfully positive, but I figured out how to plot stories, and work with other writers (and their creations), and it was a great place to leech off all those youthful enthusiasms in my writing.

And there was such freedom in fan fiction writing. The ability to do whatever you want when you're not trying to please anybody but yourself was enormously liberating. The whole idea of just writing for fun - not to make money or reach a huge audience - but just for the fun of putting words together to create a viewpoint.

Sometimes it really helped - on the day I found out one of my oldest friends in the world was quietly ripping me off I started writing the adventures of a Jerry Cornelius rip-off called Dr Skin, and the Therapeutic Skin Jobs (as they were super-cleverly called) really did make me feel better. That sort of writing didn't help with proper trauma, but it certainly made me feel less grumpy on blah days.

I never made a conscious decision to stop writing fan fiction, it just faded away, as things tend to do in life. I wasn't alone - nobody has written a new J Street story in years and years. I do occasionally start writing another Therapeutic Skin Jobs every couple of years or so, but rarely finish them

I never really gave up fiction, and have even collaborated with several NEB writers on move scripts and prose things, but that was still just writing for kicks, not for any greater consumption.

And now I've got the Tearoom of Despair, which satisfies almost all of my writing urges on a daily basis. (I did finish off another short novel last year, but I haven't written any proper fiction since then.) There isn't the charge of collaboration, or the kick of a really good story idea, but it's basically the same thrill as fan fiction writing. This writing is all for fun, not for fortune and glory, and that's the way I'd like to keep it.

We do all think less of something when we hear it is fan fiction - 50 Shades of Grey never got over being a Twilight fan fiction for many people - and there is just cause for this, because the vast majority of it is terrible.

But I think it's also a hell of a lot of fun, a great way to purge the worst habits of fiction writing and a terrific way to meet people who are into the same things as you. I've only actually meet the Dadamerican and The Mighty Hank in person, but I have made some great friends through all this silliness, (and lost a few, too. Nope Callahan! Where are you, man? Email me at bobtemuka at Hotmail!).

I don't regret spending all that time and effort on something as silly as fan fiction. It's a phase I have long moved past, and one that I'm not going to revisit all that often, but I'm glad I did it.
Posted by Bob Temuka at 4:56 PM